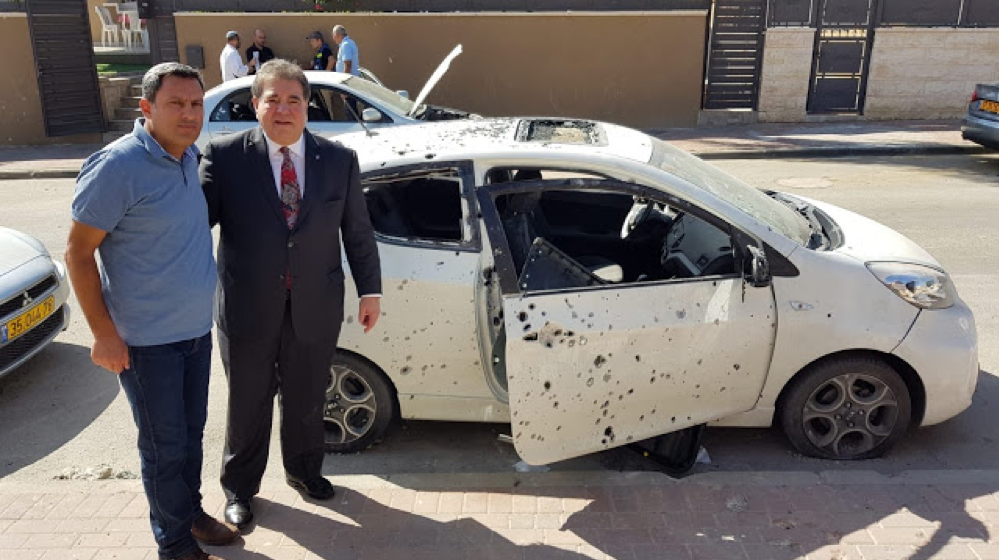 Jewish National Fund-USA CEO, Russell Robinson, standing with the mayor of Sderot, Alon Davidi, in front of a car riddled with holes.

I have just returned from Israel after spending time with over 250 of our partners – our donors – who were taking part in five different Jewish National Fund-USA missions visiting our philanthropic investments in Israel. While every Jewish National Fund-USA mission to Israel is an enthralling and exhilarating experience, the latest flareup in Gaza added another dimension to my own, and our mission participants’, experience.

I was packing for Israel when suddenly…

My phone's ‘tzevah-adom’ (red alert) app (an app that notifies you when missiles are fired from Gaza) started to blare "Red Alert! Red Alert!" Immediately, I checked if it was one missile or more. It was more. I watched as one missile after another was launched from Gaza into the Israeli communities surrounding the border. Our Israeli friends who live in the Gaza Envelope describe life there as 99% heaven and 1% hell. The 1% hell was beginning again from Gaza, which Israel withdrew from 14 years ago.

Friday evening came around in Israel. For everyone else in the world observing Shabbat, Friday evening is when people light candles and cover their eyes, celebrate the end of the week and the beginning of a new Shabbat – a time of peace, rest, and rejuvenation. On that Friday, the people living in the Gaza Envelope did not have that experience. Rather, they heard "Red Alert! Red Alert! Red Alert!" as they ran to bomb shelters trying to save their own, and their children’s, lives.

After landing in Israel, I immediately headed south to be with the people of the Gaza Envelope – people Jewish National Fund-USA has stood with yesterday and today – and will stand with tomorrow and forever.

When I arrived in Sderot, I met with the city’s mayor, Alon Davidi, in the special security room where he goes to watch over his citizens during a crisis and make sure that even if somebody calls and needs something as minor as help closing a window in their home, he can find someone to assist.

In Sderot, as we walked through the neighborhood, we visited one of the homes hit by a Kassam rocket from Gaza. A family of six showed me their safe room, which barely had enough room for three people, let alone six. I saw windows blown out and their 16-year-old son’s bicycle covered in glass. Bullet-like holes riddled the walls of their home. The car parked in front of their home was destroyed.

While our families in the US will never go through the devastation these brave families living in the Gaza Envelope are going through, I came to Sderot to give them strength, to convey the good wishes of hundreds of thousands of Jewish National Fund-USA supporters and to tell them that we will continue to support them. I came to Sderot to tell our Israeli brethren that while we have always stood by them, we have received much more from them than they ever will receive from us.

Yes, we built the Sderot Trauma Resilience Center and the world-famous indoor Sderot playground that allows young children a place to play in security. And although we will continue to build beautiful parks and new housing sites for the residents of Sderot (you can directly support our efforts in Gaza border communities here), one thing we cannot give them is the courage and strength that is embedded in the soul of each and every person living in the city. After the dust settles, the residents of Sderot will not dwell on the past, rather, they will start to clean up and move forward as they have always done.

As I walked down another street in Sderot, I saw there were four new housing sites in the housing development area that Jewish National Fund-USA’s Housing Development Task Force had helped fund. These housing sites will soon be the new homes for families moving to Sderot. As I walked down the street, I met other people who were talking about other new neighbors who were moving to the city. I didn’t hear anyone talk about the crisis. Inspiringly, people in Sderot would rather talk about life and living. We are there with them in so many ways because this is truly the Jewish National Fund-USA story. 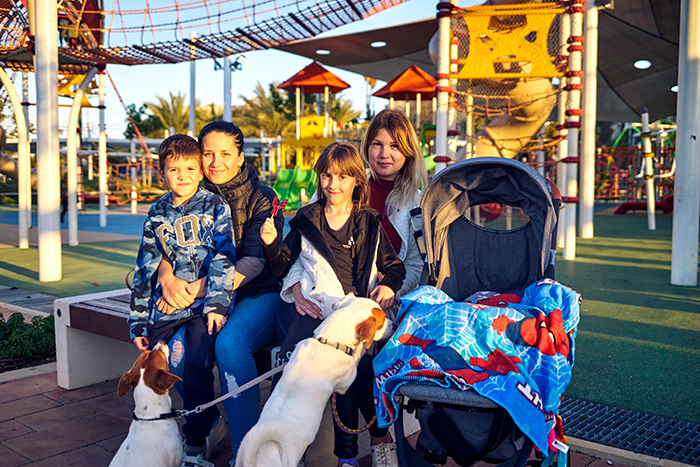 After visiting Sderot, I……

Continued south to the Eshkol region that's literally on the border with Gaza. There, I went to the brand-new high school, elementary school, and kindergarten. It was built in a new complex and is one of the most magnificent places I have ever seen. I saw the children singing and the teachers, who could’ve been talking about fear, only talking about life!

We also held a special dedication ceremony for Betsy Fischer, the chairperson of our Gaza Envelope Task Force. For those who don’t know Betsy, she is a member of Makor, Jewish National Fund-USA’s Ambassador group, is a past president of our Southern New Jersey Board, and is a member of the Sapphire Society. Somehow, she also finds time to be a mom, wife, dance teacher, and professional DJ. Betsy didn't know that just a month earlier, her husband, Peter, called me and said he wanted to give a special gift to his wife, who is so dedicated to the residents of the Gaza Envelope and the people of Israel. He wanted to have the new kindergarten playground named after her.

Through Peter's generosity, we stood there looking over Gaza and unveiled a plaque dedicating the new playground to her. It was such a special moment! In addition to Peter’s generous commitment, this playground is also dedicated to the thousands of Jewish National Fund-USA supporters who stand with the residents of the Eshkol region.

During my visit, we broke ground on a special Eshkol regional children's playschool that will include a music school and science center to integrate play with education. The ceremony was attended by U.S. Ambassador to Israel, David Friedman, Eshkol Regional Council Mayor, Gadi Yarkoni, Pastor Franklin, other community leaders, Jewish National Fund-USA supporters, and local residents. During the ceremony, the local residents and I were deeply moved when Ambassador Friedman remarked, “I cannot imagine the difficulty which the people who live in Eshkol must face waking up a child in the middle of the night because of sirens.  Your courage in the face of extraordinary challenges is proof that the people of Israel are not going anywhere.”

Betsy Fischer and her husband, Peter, are supporting Israeli children living on the border with Gaza

While the terrorists in Gaza fear the IDF, let me tell you that the greatest fear they have is that Israelis, especially in the Gaza Envelope, are continuing to live life and their resilience is giving strength to the Jewish people around the world. If you feel as deeply moved as I do by these incredible people, our brothers and sisters, living life to the full in the face of adversity, perhaps you will consider supporting Jewish National Fund-USA’s Community Building Fund here?

P.S.: In honor of Giving Tuesday (December 3rd), every gift made to Jewish National Fund-USA will be matched thanks to the generous contributions of the Gene & Marlene Epstein Humanitarian Fund, Bernice Friedman, and Drs. Toby and Mort Mower (up to $1.25 million). Visit www.jnf.org to donate or locate a Giving Tuesday event near you.

Wishing you and your family a Happy Thanksgiving,