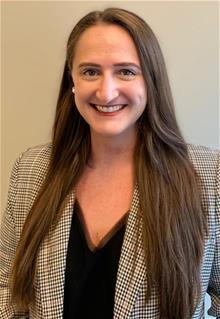 Austin, TX., March 12, 2021 — Chayla Furlong, Jewish National Fund-USA’s (JNF-USA) new Director, Central Texas is looking to create immediate impact by connecting Texans to Israel through JNF-USA. “The Southwest is JNF-USA’s largest geographic region, but our youngest regional campaign. I want to capitalize on the explosive growth in Austin and San Antonio to drive results for the Southwest campaign and position our region to thrive.” It sounds bold, but Chayla’s history shows a proven track record of growth, expansion, and attention to detail.

In her eight years at Nordstrom, Chayla rapidly rose to management, where she took charge of four departments and over $5 million in sales volume, and also worked as the Customer Relationship Manager for one of Nordstrom’s largest Northern California stores. She then became the inaugural Executive Director for Sigma Alpha Epsilon Pi (SAEPi), a Jewish sorority and nonprofit. As Executive Director, Chayla dramatically increased the sorority’s visibility and presence, more than doubling both membership and the number of SAEPi chapters and creating strategic partnerships with JNF-USA and other Jewish and Israel organizations.

Raised in a home where Israel was never discussed, Chayla says that her time at UC Santa Cruz was her introduction to Israel, learning about the land and people through the local Hillel and Chabad. “But really, my true love of Israel began with my Taglit Birthright trip in 2008,” she said, which only grew as she shifted into a career in Jewish nonprofit, and learned more about JNF-USA’s vital work in Israel.

JNF-USA Southwest Executive Director Reagan Weil said: “Chayla has a proven record of growing organizations she’s a part of, and I am extremely confident she will do the same for our Central Texas campaign. We are all very excited to have her on board and can’t wait to see her innovative ideas in action.”

Now living in Central Texas, Chayla believes that her new community is ripe for expansion. “I think that the Austin community is poised to grow; it’s poised to explode,” she says, noting the increase in tech innovation and larger companies moving to Austin. “We have an opportunity to grow JNF-USA in this region because the city itself is growing, and with that will come the growth of the Jewish community and the presence of Jewish National Fund-USA.”

Above all, Chayla was adamant about the importance of highlighting partners and the important work they do as contributors to JNF. “We need to create meaningful relationships with our partners,” she said. “They are on the front lines of our organization, and without them we wouldn’t be able to do all the wonderful things we are doing in Israel.”