CHICAGO, April 1, 2021 — Longtime Chicago residents Scott N. Schreiber, local attorney and co-leader of Clark Hill’s Corporate Restructuring & Bankruptcy Law practice and his wife Robbie Hoffman Schreiber, who educates and prepares immigrants for their U.S. Citizenship exam and serves on the executive board of the National Council of Jewish Women - Chicago North Shore, have been selected as the 2021 recipients of Jewish National Fund-USA’s (JNF-USA) prestigious Tree of Life™ Award for their exceptional contribution to the Jewish community and the land and people of Israel.

The JNF-USA Tree of Life™ Award is a humanitarian award given in recognition of outstanding community involvement, professional leadership, and dedication to the cause of American-Israeli friendship with the devotion to peace and the security of human life.

“I am deeply committed to Israel and JNF-USA is my favorite other job,” said Scott N. Schreiber, member of JNF-USA’s Chicago Board of Directors and National Board of Directors. “It’s very exciting for me to invite family, friends and coworkers to a JNF-USA event, have them see what I’m involved with and share in this major part of my life. We are honored beyond belief to receive this award.”

The couple will be celebrated at a virtual award reception on June 8, 2021 at 7:00 pm CT. The spectacular ceremony will feature an intimate dialogue with Emmy-award winning actor, director, producer and best-selling author Henry Winkler and Academy-award winning actress, producer, and activist Marlee Matlin.

Event Co-Chairs Gail and Andrew Brown said “We've been close friends of Scott and Robbie for decades. Their energy, enthusiasm, and dedication to JNF-USA and to the Jewish community at large has been continuous during our friendship. We're inspired by their focus and goodwill and are delighted to serve as co-chairs of this fantastic event.”

The Schreibers have been heavily involved with JNF-USA for the last 15 years, with Scott’s first leadership role being President of the Chicago Board of Directors. He later served as President of the Midwest Board of Directors and is currently a member of JNF-USA’s Board of Trustees. He also sits on both the JNF-USA National Board of Directors and the Budget and Finance Committee. However, it is perhaps his current role as JNF-USA’s Vice President of Missions that is the most meaningful, as Scott knew he wanted to get involved with JNF-USA after he was first introduced to the land of Israel 16 years ago when the Schreiber family participated in a JNF-USA mission. Since then, he has led several JNF-USA missions, including the JNFuture Leadership Institute Mission and the Spirit of Israel Mission. 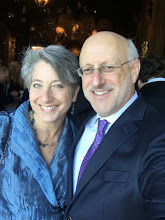 Scott jokingly calls himself a “tree hugger from way back,” which is fitting as the award is named Tree of Life™ to symbolize Jewish National Fund-USA’s efforts to develop the land of Israel from barren and uninhabitable into lush green forests and fields, productive farmlands, and recreation facilities. Having previously owned a landscape architecture business and being a life-long environmental enthusiast, upon traveling to Israel on the JNF-USA mission, he was incredibly impressed with how advancement in Israel’s agricultural technology and infrastructure made the land fruitful and utilized land in a thoughtful and sustainable manner.

Like Scott, Robbie was highly impressed by Israel’s agricultural technology and water recycling initiatives supported by JNF-USA’s philanthropic investments — and she knew JNF-USA was the right organization to partner with.

“When we first became JNF-USA major donors, we decided to support an environmental project that JNF-USA partners with in the Arava region called the Arava International Center for Agriculture Training (AICAT). We’re able to help provide scholarships to students who attend this international agricultural technology school from countries like Kenya, Thailand, and Vietnam, among others. Students spend a year at this institute and then return to their home countries and open their own businesses and farms while also becoming ambassadors for Israel. It’s truly remarkable. You bring all these people who have never been to Israel before and they see the amazing things Israel is doing, and they exclaim ‘wow, I never knew.’ It truly makes us feel good to know our contributions are helping spread Zionism,” said Robbie Hoffman Schreiber.

While Scott says learning of their nomination was completely unexpected, Marlene Copeland Dodinval, JNF-USA’s Executive Director, Chicago and Ellen Spira Hattenbach, JNF-USA Executive Director, Illinois, said the Schreibers were the obvious choice because the couple is “humble, authentic, well-known, well-respected, tremendous advocates for the next generation of leaders and the perfect intersection of love for Israel and the future of Judaism.”

In addition to his philanthropic work at JNF-USA, Scott is deeply involved in the Chicago Jewish community, having served on the Israel Committee of his synagogue, B'nai Jehoshua Beth Elohim Congregation (BJBE), and has coordinated and hosted the monthly Torah study sessions for Chicago professionals. As a member of Chicago’s Jewish community, Scott is an organizer for the North Shore Jewish Community Campaign Forum bringing together state and federal candidates to address the Jewish community.

Robbie, a lifelong passionate supporter of the land and people of Israel, lived in the Negev for a year after college and has family members among the pioneers who built the modern state. She taught Hebrew for 10 years at Congregation BJBE in Deerfield and served on its Board. Having co-led three JNF-USA missions to Israel with Scott, she is thrilled to share this honor with him.

Event Co-Chair Bruce Weininger added “Scott and Robbie are so consistent in their support for their passion projects, including JNF-USA and beyond. They are models for what a charitable life should look like.”

The Schreibers can’t wait to return to Israel in October with JNF-USA for the organization’s annual national conference. Click here to learn how you can join the Schreibers at the conference in Israel.