A Life Filled with Friends and Philanthropy 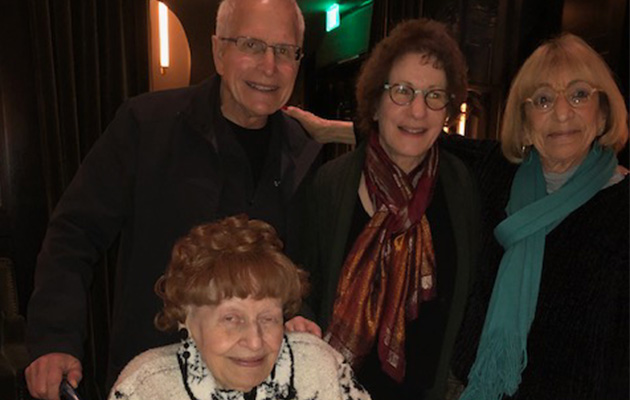 In 2004, when she was in her eighties, Frances Lee Kaufman donated one million dollars from her sister’s estate to develop Zukim, a then recently-established town in the Negev. When Kaufman visited the hamlet her donation supported, she met the first family to resettle there at their 700-square-foot home with its single olive tree in the front yard.

Back then, Frances Lee didn’t expect to live long enough to see Zukim flourish, but as she celebrates her 100th year, she’s had the pleasure of seeing the village thrive in the Arava desert. Today, the town has restaurants, spas, more than 200 guesthouses, three kindergartens, and a flourishing artist colony.

“You’ve got to put more people into the Negev, because two-thirds of Israel’s area is the desert. Israel is very small. You travel (in the U.S.) 50 miles for a good dessert after dinner and you don’t think much of it. But you do that in Israel and you find yourself in Syria,” Frances Lee said in a 2004 interview with The Jewish News of Northern California.

Zukim has been particularly meaningful to Frances Lee, who has been a long-time member of the Sapphire Society, a women’s philanthropy and leadership group at Jewish National Fund-USA.

Deepening her commitment to Israel’s development, Frances Lee also provided seed money for the Bedouin Biogas and Women’s Health Project, a nonprofit developed by students in the Arava Institute for Environmental Studies to provide a sustainable energy source to Bedouin communities in the West Bank.

In 2005, Kaufman’s donation led to the creation of the first biogas recycling system on a small family farm.

“The family has goats and sheep and they can now cook with gas produced from the animal manure. We have Arava students studying how women are adapting to it and how it’s being incorporated into family life,”  Illana Meallem, the co-initiator of the project, said in a 2010 interview.

Over time, a group of local builders built these biogas systems for several Bedouin villages and farms in the area.

Frances Lee’s contributions to Israel and Jewish National Fund-USA were just the most recent in a long line of philanthropic activities. Frances built her own wealth by operating a string of San Francisco design furnishing retail showrooms well into her 70s. After her last living relative, her sister, died in the early 2000s, Frances Lee wanted to remain active and vital in her retirement, which she found a little dull.

“How many steaks can you eat?” Frances once quipped.

Eventually, she started considering the legacy she would leave behind. Throughout her life, she always tithed and donated to Jewish charities on her birthday each year.

It was a natural fit, then, to reach out to Jewish National Fund-USA and boost her commitment to the organization. At first, her intention was only to donate trees in Israel, but after she learned about development projects in the Negev, she was all in.

That’s how Frances Lee has always lived her life -- all in. From her lifelong commitment to Jewish charities and her service as transportation coordinator for the San Mateo County American Cancer Society, she shows us all how to live a long and community-minded life.

On January 8, 2023, Frances Lee celebrated her 100th birthday with many of her Jewish National Fund-USA friends and family, a joyful gathering to celebrate a long life very well lived.

For more information on Jewish National Fund-USA's work in the Negev, visit jnf.org/blueprintnegev