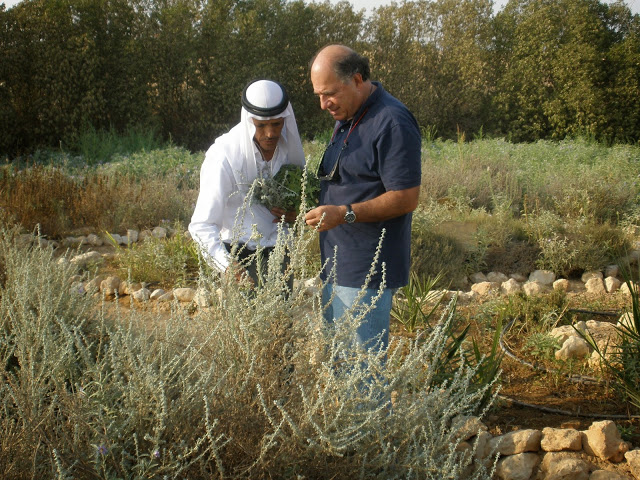 When Eti Golan, an Israeli herbalist, began studying her trade, she discovered that while European, North American, and Asian plants were well-represented in the available literature, information on the medicinal use of native Israeli plants was much harder to find.
"When you learn the science of healing in Israel, most everything -- the herbs and the knowledge about them -- is imported. There is no specific emphasis on Israeli herbs. You really have to struggle to learn more about them, especially those from the desert," said Golan, who is the manager of medicinal-plant product development at Project Wadi Attir, a model sustainable agricultural operation led by a Bedouin community in the Negev desert.
The project has been designed to leverage Bedouin traditional values, know-how, and experience with modern-day science and cutting-edge technologies. Golan works alongside the director of the medicinal-plants operation, Ali Alhawashla, a traditional Bedouin healer and an expert in Negev medicinal plants, who has dedicated his life to studying their characteristics and preserving knowledge of their uses.

The medicinal plants operation at Project Wadi Attir represents a responsibility and an opportunity to preserve endangered Bedouin knowledge -- to date, a largely oral tradition -- of desert herbs and natural healing remedies and to apply this knowledge toward the creation of a high-quality brand of healing products, including soaps and creams, essential oils, and infusion teas. This in turn will provide economic independence for members of the Wadi Attir Cooperative while employing women and youth in the Bedouin community.
To this end, Alhawashla has continued his work gathering and consolidating data relating to traditional desert plants, as well as Bedouin agricultural practices, remedies and treatments, for compilation in his own healing guide, to be published in Arabic, Hebrew, and English. Of almost 35 species of desert medicinal plants identified by Alhawashla, 15 are intended for growth on a dedicated plot at Project Wadi Attir's 100-acre site. Six are already thriving there: a combination of well-known herbs like sage, luiza (lemon verbena), and za’atar (Lebanese oregano), and other lesser-known varieties like wormwood, ballota, and felty germander. The latter three are the result of several years of Alhawashla’s trial-and-error experimentation with cultivation methods and strategies for these otherwise wild, native species.

Earlier this year, the medicinal-plants team at Project Wadi Attir oversaw the first harvest of their medicinal herbs. Once dried and put aside, they will be analyzed to effectively and uniformly extract their essential oils and apply the active ingredients for use in formulas.
As the team begins to develop new products, they will also work in conjunction with the authorities to widen the scope of Negev medicinal plants used in Israeli products, with the hope of bringing something new to market, in the healing community, and the world, which has never been seen before.
Golan points to matricaria aurea, a leafy desert plant with yellow flowers that has no common English name, but is related to both sunflowers and chamomile. While it’s a plant widely used in Bedouin healing, it’s not been approved for use by the Health Department simply because nobody has ever asked.
This underscores the urgency and importance of the Medicinal Plant Operation’s efforts at Project Wadi Attir. “If we don’t do this now,” said Golan, “no one will ever know what we have right under our noses.”
Project Wadi Attir, a joint initiative of The Sustainability Laboratory and the Hura Municipal Council, is supported by the JNF as part of their Blueprint Negev initiative. The project is also supported by researchers from the Ben-Gurion University of the Negev, KKL, foundations and individual donors, as well as a government consortium led by the Ministry of Agriculture and Rural Development.