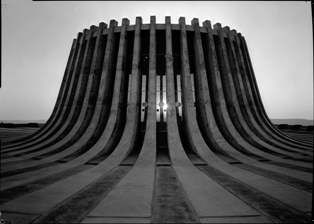 Yad Kennedy, a magnificent monument honoring JFK, is located on an isolated mountaintop in the Mateh Yehuda Region near Jerusalem. The Kennedy Memorial symbolizes the enduring friendship between Israel and the United States of America.
by Rivkah Lambert Adler
What was it about President John F. Kennedy that touched the hearts of ordinary Israelis? It was already Shabbat in Israel when President Kennedy was assassinated on November 22, 1963. The mood in Israel was somber. Just as Israelis remember where they were when they heard that Prime Minister Yitzchak Rabin had been assassinated in 1995, those who lived in Israel 50 years ago recall a similar mood of shock and sadness. Children were sent home early from youth group activities, mothers cried in the streets and the country’s citizens walked around dazed, as news of the assassination in Dallas, Texas spread.
“I remember the day Kennedy was assassinated; it was if the world had stopped,” shared Dr. Irving Taylor of Baltimore, Maryland, staunch supporter of JNF whose donation recently funded the renovation of Yad Kennedy memorial. “Everybody was in shock for three days and stayed glued to their black and white television sets. No music or commercials played during this tragic time. JFK was a special human being who was so revered, not because he was the United States President, but he was truly a genuinely good man.”
The State of Israel, just 15 years old when Kennedy was gunned down, recognized a singular promise of friendship and support in the words and actions of America’s youngest president. In a speech to the Zionists of America Convention in 1960, Kennedy said, "Israel was not created in order to disappear—Israel will endure and flourish. It is the child of hope and home of the brave. It can neither be broken by adversity nor demoralized by success. It carries the shield of democracy and it honors the sword of freedom." In 1962, Kennedy was the first American president to sell arms to the fledgling State, backing up his words with meaningful foreign policy actions.
In 1958, when JFK was still a junior Senator from Massachusetts, he spoke prophetically at a Jewish National Fund (JNF) meeting about the importance of planting trees in Israel. "What work could be more heartwarming or more enduring than the great forest at Jerusalem? Your children and grandchildren, when they visit Israel, will find your monument." Just weeks after the assassination, Menahem-Max Bressler, then-President of Jewish National Fund in the United States, introduced the idea of establishing a memorial dedicated to President Kennedy in the very forest Kennedy had spoken of so warmly. Today, thanks to Bressler’s foresight, those who were alive in 1958, along with their children and grandchildren, can visit a stunning memorial honoring President Kennedy built and maintained by JNF.
The distinctive Kennedy Memorial sits high amidst the verdant green of the Jerusalem Forest, where every tree was planted by hand. A unique memorial to a foreign president, the dramatic structure was meant to evoke the stump of a felled tree, symbolizing a life cut short. The main circular hall is supported by 51 gracefully curved columns, each bearing the golden medallion of the official seal of one of the 50 states, along with Washington DC. Each column was endowed by American Jews, often residents of the state whose seal is affixed to the column. The circular stone hall shields a Ner Zikaron, an eternal memorial candle. Forty years after it was inaugurated, the Kennedy Memorial was renovated through a generous donation by Dr. Irving Taylor of Baltimore whose parents, Isaac and Rose Taylor, funded the original Maryland column.
“When I was asked to restore Kennedy Memorial, this was something I couldn’t refuse, especially since my father donated the original Maryland column,” said Dr. Irving Taylor. “Recognizing that it needed updating, it was the least I could do out of respect to my parents and President Kennedy.”
The spacious outdoor plaza provides a panoramic view of the Jerusalem Forest, suggesting a meaningful and scenic place to hold a Bar or Bat Mitzvah or wedding ceremony. On the grounds of the Kennedy Memorial lies the Kennedy Family Planting Circle, where a dozen members of the Kennedy family, including Jackie Kennedy Onassis and Kathleen Kennedy Townsend, came to plant trees. Each year, the JNF site hosts 200,000 visitors, including foreign dignitaries and Israeli families who take advantage of the hiking trails and picnic areas surrounding the monument. Israeli school children also tour the site on official school visits, learning about the legacy of President John Fitzgerald Kennedy and his exceptional support of the State of Israel.
“It was important for Jewish National Fund to build a memorial that honored a great man like JFK,” shared JNF CEO Russell F. Robinson. “Just like we honored the victims of September 11th at JNF’s 9/11 Living Memorial, it is important for JNF to remember the great people of our past who have always supported Israel. Yad Kennedy shows the connection that JNF has with great Americans who stand by Israel, and we must pay tribute to that.”
PLANT TREES IN ISRAEL