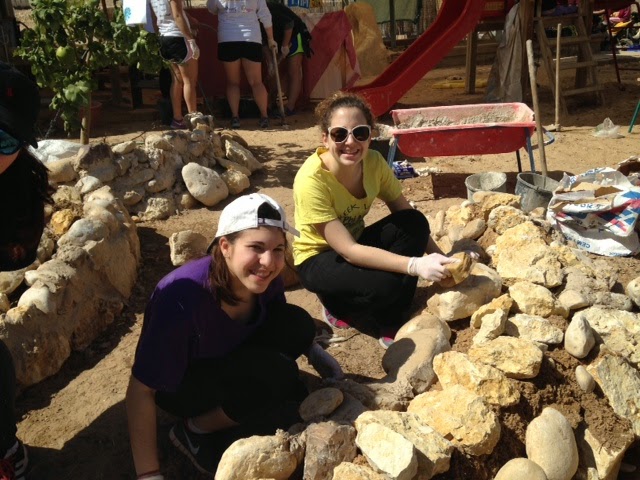 Day one of Alternative Spring Break found the 15 of us, college students and young professionals from across the US, pushing past our exhaustion and jet lag to explore the Central Arava region of the Negev. We began the morning in Zuqim, a settlement unlike any other in the Negev. Its inhabitants, mainly artists, chose not to plant any trees in their settlement, and are living life in the desert in its natural -- and often brutal -- state. The extreme temperatures, lack of water, flooding, sandstorms, and proximity to Jordan make the Arava an intense place to live, but these pioneering people are fulfilling Ben Gurion's dream, with some help from the Jewish National Fund.

Our first stop was a kindergarten built by the JNF, where we did chesed work (acts of lovingkindness). We played with the children, painted a blank wall with paints we made ourselves, built a stone wall in the garden, and heard firsthand about life in the region. Hannah, a participant from Muhlenberg College, said, "My favorite part was getting to play with the children and seeing how they interacted with each other, but also seeing what JNF has contributed and how the children use it and how appreciative they are."

After a leisurely walk through a relatively isolated part of the desert we drove to the Yair Research and Development Center, where we received an orientation in the interactive visitors center. We learned that 60 percent of Israel's produce is grown in the Negev, something that is hard to imagine when all we had been seeing was the hard, sandy landscape, occasionally punctuated by scruffy little bushes.
But the Arava is a world leader in agricultural advancements, its scientists constantly working to find the best solutions for the challenges facing the water and soil of the region. Advancements in desalinization and greenhouse farming help make the Negev a resource that can be tapped to its fullest.

We were fortunate enough to tour some of these greenhouses, walking up and down rows of the different fruits and vegetables that are not only spared from the pests that attack the crops in the more humid north, but are actually sweeter than anywhere else in the country, because the brackish water makes them work that much harder to survive, and so more sugar is produced.

"It was very cool to see how they grow the different plants, and awesome to hear about the desalinization process and how and why their fruits and vegetables are sweeter," Sydney, a participant from Florida Gulf Coast University said.

The impact of the JNF on the region is obvious when visiting the Arava. The people living there benefit from its presence each and every day, whether in education, agriculture, or even medicine. In fact, the JNF recently opened the first medical center in the region, and it is having a profound impact on the inhabitants of the least-populated part of the country, but one of the most fascinating.
PLANT TREES IN ISRAEL