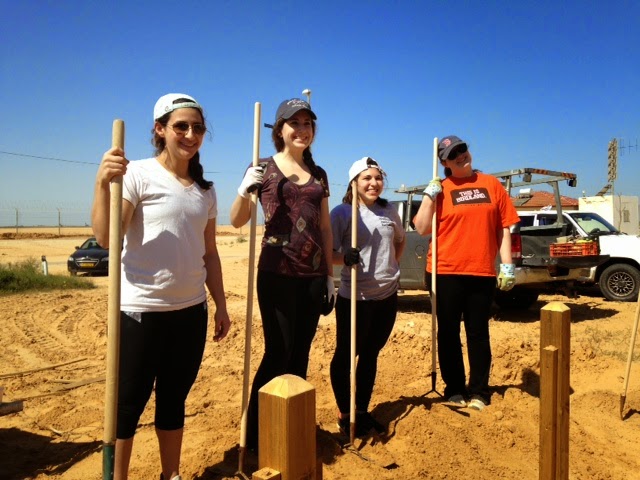 Today started off with the same type of savory breakfast, although there was chocolate pudding! For breakfast! Israel is an amazing place.
Our destination was the Halutzah region, which sits in the Negev between the Egyptian border and Gaza. We worked in the village of Shlomit, which was similar to yesterday's Zuqim, although Shlomit is smaller with only 40 families. The project today was creating a play area for the kids of the community: laying sod in a small lot, building a roof on a patio for some shade in the hot desert, and painting murals inside to create a welcoming indoor playroom for the kids.

I worked on planting the grass, which required clearing out and flattening dirt, laying down gravel, and nailing the sod to the ground. It was hard work, but looking at it before we started and after we finished was amazing. Even before we were done, kids started playing and wrestling in their new play area, and it felt so wonderful to instantly see the impact our work had on this little community.
While at Shlomit, we took a brief sightseeing tour on an ATV. We were taken almost all the way to the Egyptian border, stopping at a tree that was surrounded by fragments of rockets shot over from Gaza. We could only stay there for a few minutes, or an Egyptian soldier would have come over from border patrol to investigate, but it felt invigorating to be standing in a place that only months ago was so dangerous and scary. 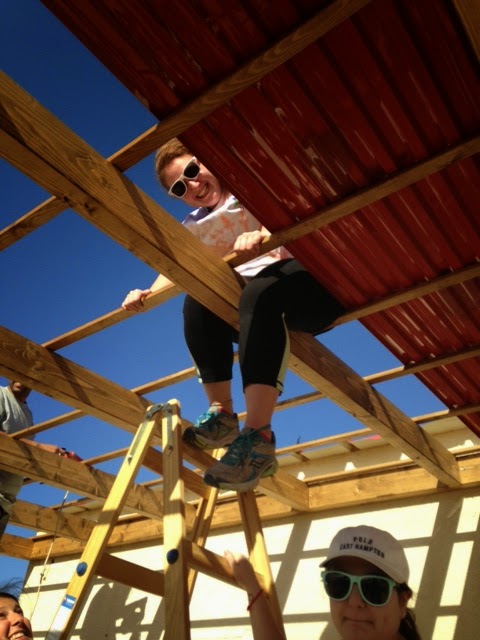 Speaking of things seeming dangerous, I was really surprised by everyone's attitudes toward the threat of attack from Gaza. Unlike communities in the Arava, where rockets were not directed this summer, Shlomit is shaped by this constant threat.

Many people in the Halutza region chose to leave the area during the conflict (which I most likely would have done had I been there), but some people, like the people of Shlomit, stayed and continued to live their lives in the face of danger. When the sirens went off, they had 15 seconds to drop everything and run to the nearest bomb shelter before the rocket hit.

We spoke to a woman, Tamar, who has young children. Walking the 50 feet from her home to the daycare center, she spent every moment determining which was the closest bomb shelter in case the sirens were to go off. This was her norm. This is what they face every day, and they take it in stride.
We also visited the JNF indoor playground in Sderot, and again I was struck by how strong and adaptable Israelis are. While the whole facility is not rocket-proof, there are six bomb shelters throughout the building. Each is a different size, and they contain everything from paintings of Dora the Explorer to a soccer field to a venue where someone can hold a bar mitzvah beyond the reach of rockets.

As with Shlomit, there are 15 seconds between the sirens going off and the bombs hitting. In the playground, things are modified so that when the sirens go off, kids are able to drop everything and get into a shelter. The rock wall is short enough that a child can quickly get off. Floors are soft enough that children won't get hurt if they fall down, but not so soft that it slows running to a shelter. It is truly an example of making the best of a terrible and scary situation, and it is so inspiring to see.
We wrapped up the day sitting around a campfire and debriefing. Many of us were struck by the sheer bravery and determination it takes to start a new community on the border of Gaza and Egypt, and we were touched by how much of an impact it seemed that we made. We also remarked that we've been getting close as a group, and how much we appreciate one another's work ethic and motivation. Our medic/guard/basketball superstar, Oren, tried his first s'more; he gives it a 5.5 out of 10, although we used tiny parve marshmallows and chocolate-covered cookies in lieu of the typical ingredients. He'll be working as a counselor at a camp in Boston this summer, so there is still hope for him.
Read more about my Alternative Spring Break experiences on my personal blog.