At a high school like no other, Israel is the classroom for six weeks 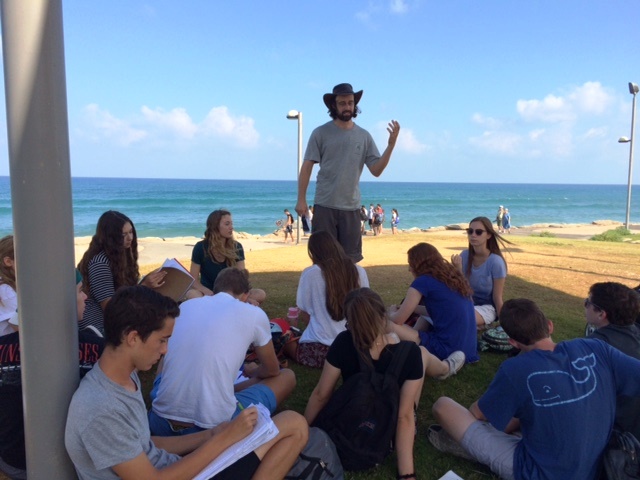 Their bus pulls up next to the park that hugs the Tel Aviv shoreline and the high-schoolers stream off and run straight for the playground. But rather than climb the structures and play on the swings, they scramble through their backpacks for their notebooks. The energy and excitement at being outside seems normal for a group of teens, but these students are part of an experience that is anything but typical.

They have had the worldly experience of traveling to an archeological dig at Tel Gezer, where they explored ancient Canaanite society; to Masada, where they learned of the Israelites' triumphs and downfalls; to the Galilee, where they encountered crusader sites alongside Israel’s natural beauty; and to too many more places to name. These students have elected to spend their summer at Jewish National Fund's Alexander Muss High School in Israel (AMHSI-JNF) and they're studying history intensively while earning high school and even college credit. 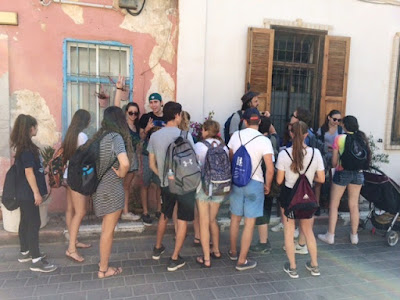 While most students might wait until college before spending a semester abroad, these teens are spending a high school semester in Israel, where their academic education is enriched by experiential learning. They live what they study, going to different places in Israel to experience firsthand what many of their peers learn about only from books.

On this trip, the students are exploring Tel Aviv's first neighborhood as part of their lessons about the earliest towns and cities established by Israel’s pioneers more than 100 years ago. "We're learning about the history of Tel Aviv as a 'Hebrew' city, not a religious one, and then, as a group, we will discuss what this means in terms of Jewish identity," says instructor and AMHSI alum Danny Stein.

Founded in 1972, AMHSI boasts over 25,000 alumni from around the world, including Facebook Chief Operating Officer Sheryl Sandberg and award-winning Hasidic rapper Matthew "Matisyahu" Miller. As a non-denominational semester abroad and college prep program, AMHSI successfully caters to the full spectrum of students seeking a unique Israel and global experience that goes deeper than most short-term trips can offer.

The main campus is located in Hod HaSharon, just outside of Tel Aviv, and this was the students' first educational trip to Israel’s largest city and its modern hub. The program covers the 4,000 years of the history of Israel in chronological order, no simple task, as the teens explore their rich history and grapple with the complexities of Israel’s past and present, discovering their own futures as Jews and global citizens.

It’s no wonder, then, Tobias and Sophie Tenenbaum, cousins from Miami, Fla., say they weren't sure what to expect, but now don't want to go home. "I'm not religious and I don't go to temple," says Tobias, "but this experience makes Judaism feel more like a community than a religion, which is easier to connect to." Surely, the founders of Israel's secular haven and Hebrew city, Tel Aviv, would be pleased to hear this.

'You're aware that history took place'

Naomi Gluck from Syosset, N.Y., says that even though she’s been to Israel many times and has family there, it's different to be on her own and exploring the country as a student, and she appreciates getting to see the places where history occurred firsthand. "The biggest difference from a regular school is all the trips," she says.

Siblings Nicole and Noah Zedeck, from Steamboat Springs, Colo., decided to follow in their father’s footsteps and attend the program as a way to have time together before Noah heads off to college in the fall. They talk excitedly over each other about what makes AMHSI special. "This program is unique because you learn so much in class from the beginning on the first day, and you really get the big picture," Nicole says. Noah adds that "the fact that you visit all the sites and see them firsthand is incredible," and Nicole nods along enthusiastically, saying "you're aware that history took place."

Sitting by the beach, Stein regales the group with the story of Tel Aviv's founding in 1909. He speaks about the necessity of a new city due to overcrowding in next-door Jaffa, which he points out just down the coastline, an ancient port city that's become a vibrant center of art and culture in modern Israel. To transport his students back in time, Stein pulls out a few pictures of sand dunes and camels, photos from the beginning stages of building Tel Aviv, and explains that the photos were taken more or less where the students are sitting now.

From the ancient to the modern

The students listen intently, quietly taking notes on the names of the city's founders. Sitting in the park, Stein reminds the students what they had learned about the earliest Jewish settlements and how they had been small religious communities built near holy cities in Israel. For these kids, mostly from secular backgrounds and mostly from North America, Tel Aviv looks like a modern city, even familiar in some ways, which is quite a departure from the ancient sites like Masada and Jerusalem they've been visiting.

As Stein talks about the radical idea of a few Jewish pioneers to build a city in the sand, the kids are clearly captivated as they look from Jaffa to their left to the tall buildings of Tel Aviv on their right. It seems crazy to think of people leaving the safety of the walled city of Jaffa to build something new, but these teens who have left their families and homes behind for six weeks to go halfway around the world are surely having a transformative adventure of their own.
PLANT TREES IN ISRAEL