Caravan, day 2: The diversity of Israel 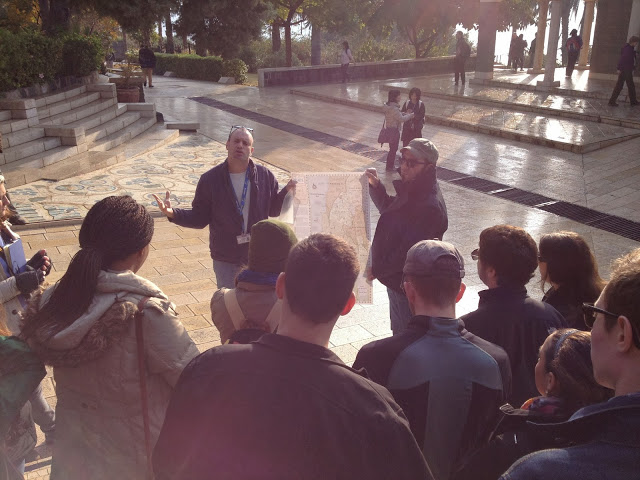 In the United States, we always hear about the problems in Israel and the Middle East as a whole.  With news reports full of geopolitical threats and conflicts, we never hear about what's going right in the country and the region as a whole. Over the past two days, our tour has gotten a glimpse of the amazing things happening here in Israel and the great diversity that the country contains in so many aspects -- religious, racial, economic, culinary, cultural, etc.  From Biblical sites and religious kibbutzes to modern cities and emerging technologies, Israel has truly exceeded my expectations and proven to be a truly diverse nation.


We started the trip on tours of the Mount of Beatitudes, Sea of Galilee, and the city of Capurnaum. For many of us who grew up in religious American families, seeing Biblical sites truly made the scriptures come alive. Being able to see the mountain where Jesus preached and feel the walls of the synagogue that Jesus attended was such an incredible experience that can only be gained by visiting Israel.


The religious sites are not only relegated to Judaism, Christianity, and Islam, however. We visited the Bahai gardens, the religious center for a small religion rarely studied in the United States.  And after talking to members of the Druze community (another religious minority with roots in the Middle East), I realized that religious diversity in the nation is not exclusive to the three monotheistic religions.  In the city of Haifa, many many religions coexist in peaceful neighborhoods and stand as a sign of hope for the region as a whole.

However, Israel is far from being simply a place of pilgrimage for the religious.  While on the Sea of Galilee, we boarded a ship which monitors the water conditions, ensuring environmental stability of the water source.  This mix of ancient faith and modern technology continued to be a theme today as we visited the Technion Israel Institute of Technology and conversed with a researcher there on the Jewish thought on stem cell research and how the university develops a sense of ethics on the line where religious morals meet modern technological realities.  After arriving in the commercial center of Israel, Tel Aviv, it is clear that the concept of modernity mixing with a diverse set of religious beliefs is present in every aspect of society.  The young city is home to Jews from many racial backgrounds and people of all religious persuasions.  It is truly incredible to see the variety of people interacting in business, recreation, and every aspect of life.


The diversity of Israel has astonished me since arriving two days ago.  And not simply diversity in the racial sense.  The nation has many more religions, attractions, artists, businesses, cultures, and cuisines than I ever expected to see in the small country.  Despite the portrayal of the region in Western media, Israel has developed to be a truly international nation where ancient religions and modern society interact in a beautiful mix, and I cannot wait to see what the next week has in store.
PLANT TREES IN ISRAEL