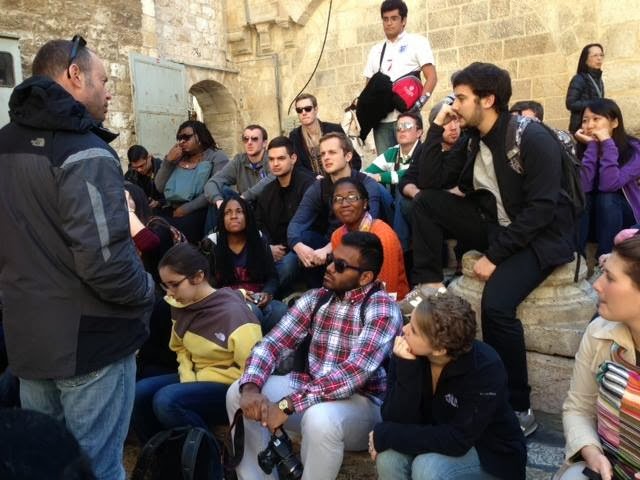 Just two days ago (although it seems like a lot longer), Caravan for Democracy arrived at its first historical site: the Church of the Beatitudes. Since then, some of Jesus's words, from the Sermon on the Mount, have been resonating with me over the course of this adventure: "And He saith unto them, Follow me, and I will make you fishers of men." This memory begs the question of the relevance of these "fishers of men" in contemporary Israel. This evening, we had the opportunity to engage in a conversation with a former member of the Knesset, Dr. Einat Wilf. In one of her remarks, she broke down the plight of women in Israel into three distinct categories of conflict: (1) 21st century challenges, (2) 20th century challenges, and (3) 10th century challenges. In Israel, there are many examples in which the concept of tradition becomes a limiting factor -- among those mentioned by Dr. Wilf: segregation among the ultra-Orthodox, and polygamy among the Bedouins. About the ultra-Orthodox, Dr. Wilf said, "Am I allowed, as a liberal feminist, to tell another woman that she's wrong?" The conclusion she came to was in the affirmative -- that a line must be drawn between tradition and modernity.
But in that progressive reality, does there not exist an inherent contradiction vis-a-vis the traditions regarding the legitimacy of the Jewish state? The notion of a rightful, historic homeland is frequently cited as a claim to statehood for the Jewish people. Surely, that is a tradition rooted in history, just like Dr. Wilf's progressive movement is in Israel.
Regarding international relations, Israel and the larger Middle Eastern region represent the epitome of constructivist theory. Analyzing global politics from a perspective of identity, constructivism holds that a social interpretation of reality dictates international affairs. Over time, the preservation of identity becomes a tradition, like those of the ultra-Orthodox and the Bedouins.
With that, how does Israel justify these two competing interpretations of tradition? Is it sensible for a country founded on tradition to erode away cultural sub-groups' traditions in the pursuit of modernization? Dr. Wilf proudly campaigns to render the state not just a fisher of men, but a fisher of women as well -- she is not afraid to debate the critical questions in the public sphere. How does this mesh with the tradition implied by the existence of the Israeli state?
While Israeli foreign affairs remain dominated by neighboring belligerents, internal contradictions regarding sovereignty are temporarily irrelevant, as realist international relations take hold.
With that, the challenge of Israel remains: "Be ye therefore perfect, even as your Father which is in heaven is perfect."
PLANT TREES IN ISRAEL