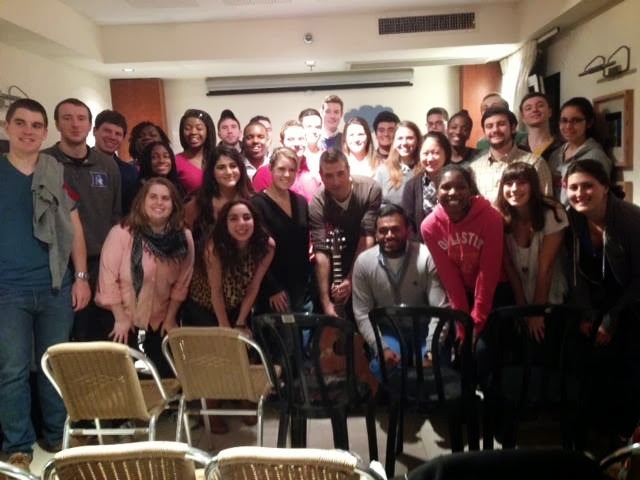 Though we’re not even halfway through the Caravan for Democracy program, we have been blown away by how much we have learned, seen, and done, how far we have traveled, and how many incredible individuals we have had the privilege of meeting. Today primarily revolved around exploring the Old City of Jerusalem, and I (and hopefully others) will blog about that in a separate entry. However, it started with an unexpected and fascinating discussion as we departed Tel Aviv.

Yoni, our engaging tour guide, introduced us to what he called the "backyard of Tel Aviv." This "backyard" largely -- he suggested entirely -- consists of immigrants, most of whom emigrated from Sudan and Eritrea around 2005 to escape genocide. Bedouins, nomads of the Sinai desert, charged each of these refugees $1,000-$2,000 to transport them across the desert after which they walked into Israel. 60,000 immigrants arrived in a short period of time and their presence was "felt right away," according to Yoni. The state of Israel has never had an official immigration policy, which really surprised our group coming from a country with a complicated, evolving, and disputed, but very real immigration policy. Therefore, these immigrants created an unforeseeable dilemma.

International law prohibits rejecting immigrants seeking asylum, but there is a clause that wrinkles this complex fabric stating that if refugees come from an enemy country to the home country, the home country does not have to take them in. Sudan has in the past and possibly still assists Iran by bringing weapons into the Gaza Strip so Israel technically did not have to accept the Sudanese immigrants. However, since they came from countries ridden with Genocide sans human rights, Israel did allow them to stay. Still, the illegal immigrants continue to have trouble making a living since they are not Israeli citizens so any work is illegal without access to work permits. Yoni gave examples of typical jobs such as construction and washing dishes. When we drove through the neighborhood they live in, he pointed out a group of men sitting at a store front, and told us some of them were probably waiting to be hired illegally and cheaply for the day to assist with a number of menial jobs.

Many Israelis have not accepted the immigrants for a variety of reasons: they now occupy nearly all of the cheap housing options in Tel Aviv, they’ve affected the economy by opening businesses that don’t pay taxes, and the crime rate increased dramatically in 2005 and 2006 when the bulk of the 60,000 immigrants arrived because some of them revert to stealing to get by since they have no legal means of working.

Out of the 60,000 immigrants, there are roughly 36,000 from Eritrea, 14,000 from Sudan, and 10,000 from the Ivory Coast, the Congo, and Nigeria. The third group, according to Yoni, is taking advantage of what has happened to the Eritreans and the Sudanese by claiming to be asylum-seekers. By so doing, they’ve tarnished the whole situation for a lot of Israelis.

The Peres Center for Peace, the non-profit we visited on Tuesday in Tel Aviv, tries to improve the conflict between Israelis and Palestinians by bringing them together, face to face, which seems like it would be an effective and powerful way to begin to the peace process. Perhaps a similar program involving Israelis and these immigrants might help this issue since Yoni said that many Israelis are fearful of the immigrants simply because they are unfamiliar, or “the other.” Moreover, Yoni thinks some Israelis do not know the immigrants’ truly horrific story. In Eritrea, children are recruited to the military. Many have died from malnutrition. There are no legal trials, and there is no limit to how long the government can lock a citizen in jail. Plus their journey through the Sinai Desert is a nightmare; many women are raped in the process and they pay all the money they have just to cross the desert.

It is important to note that there have been demonstrations and initiatives launched by Israelis supporting the immigrants. Levinsky Park is in the center of where the immigrants live and there’s a group of Israelis that regularly brings soup to the park because there was one homeless immigrant who passed away from sleeping out in the cold.

The State of Israel, we’ve realized more and more each day, is such a unique place, and every issue it faces must be dealt with so much sensitivity and prudence. The State constantly fears its demography since there are literally enemies on every side who seem eager and ready to attack. Even this immigration issue interweaves into the intense and messy demographic web. The most definitive step the State has taken to resolve this issue was in 2011 by installing a fence to seal the border, mostly inspired by the Arab Spring. Ultimately, according to Yoni, Israel has not reached a real solution for this issue, which appends it to the long list of Israel’s unresolved demographic questions.

Over the past few days, we’ve seen and discussed many instances of racism, stereotypes, and prejudices on all sides of the overarching problems in this region. Yoni ended this particular discussion with an interesting idea: “racism is something that needs to be washed away on a daily basis just like you brush your teeth.” Perhaps if everyone makes a concerted effort to wash away prejudices and judgments at the end of each day, we could start anew each morning and expedite the peace process.
PLANT TREES IN ISRAEL