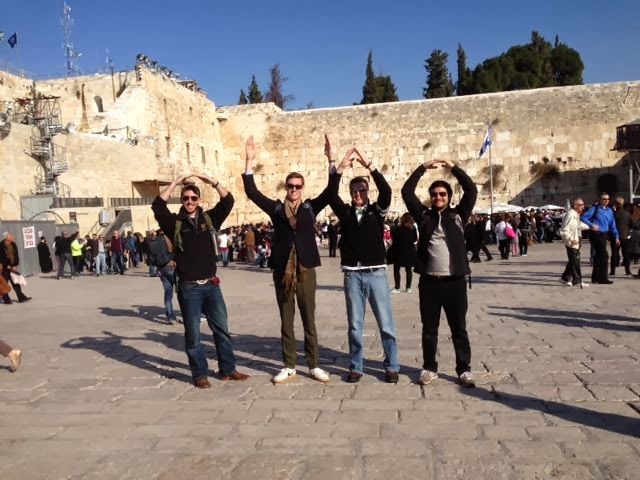 Caravan participants at the Kotel (Western Wall) in Jerusalem.

I'd first like to express my unending appreciation to the Jewish National Fund donors and Shorashim tours, especially our guide Yoni, for arranging a holistic and diverse educational experience in Israel. Their confidence in the youth of America to venture to a new world with an open mind equals my own and this is evident by an organized itinerary that encouraged questions and vigorous deliberation. My appreciation of this shared value is immeasurable.
Our world is one of tumult with an innumerable array of factors either abating or aggravating the old and new conflicts of our age. In Israel, as in the United States and around the world, this is evident when walking the streets and deciphering stories. However, one must look past the appearances to uncover these conflicts, because everything looks normal. The people wear western style clothing and shop at designer outlets. Ethnically diverse friend groups laugh in the streets and happily exchange pleasantries on the sabbath. You wouldn't know that war has periodically come to this land and that a majority of her sons and daughters have served to defend her militarily. Everything appears normal.
Yet, there are traces of history that betray this normalcy. There are remnants of struggles passed. Evacuated houses atop the Golan Heights reminds us of war in 1967. Crowded, government commissioned apartment units near city centers continue to echo Israel's overwhelming immigration flood following her Declaration of Independence which threatened to overbear her young government and society. The ancient desert fortress of Masada, a historical and cultural talisman for Israelis, is now crawling with European and American tourists, indicating that the old Zionist fanaticism once attributed to the ancient mound and the country as a whole is being wiped by modern minds in the melting pot of Israel. Carefully placed Militant-Deterrent Security fences are a reminder of the geopolitical forces that rage between political leaders--irrespective of the genuine cohabitation between Palestinians and Israelis I witnessed in the crowded streets of Jerusalem.
Jerusalem, her myth may be romanticized and conflicts exaggerated, but her aura is inspiring. She is a desert testament to free peoples and their ability to undertake the daunting task of establishing peaceful cohabitation among those whose ancestors have violently warred in the past and whose leaders continue to dispute abstract values and political lines. On the ground, the touchstone of all societies--the individual human being--is undergoing a mass reflection prompted by a taste of peace and fueled by questions of future paths to either peace or war. Some recognize the beauty of Jerusalem's cohabitation and invite all the world to bask in her aura as one people united under a banner of tranquil joy.  Others are uneasy due to radical politicians and the threat of poor leadership on both sides of the conflict. Those around the world who pray for peace or fear war are watching Jerusalem. Her peoples are keenly aware of their international posture as a land to be seized by peace or abused for war.
I choose to translate my confidence in American youth to the youth of Jerusalem.  I have seen Palestinians and Israeli's sharing laughs in the city plaza and exchanging civil debate inside small businesses. I see a consensus of the youth to enjoy their lives and not engage in violence. I fully believe in due time the peoples of Jerusalem, majority and minority, will remember for their time that those who live with them are their brothers and sisters and in the worlds of Robert Francis Kennedy will realize they "share the same brief moment of life and seek only but the chance to live out their lives in purpose and happiness, seeking what satisfaction and fulfillment they can."

We can do well to look upon Jerusalem with hope -- for she is hopeful.
PLANT TREES IN ISRAEL