Caravan, day 7: From the scars of war, inspiration 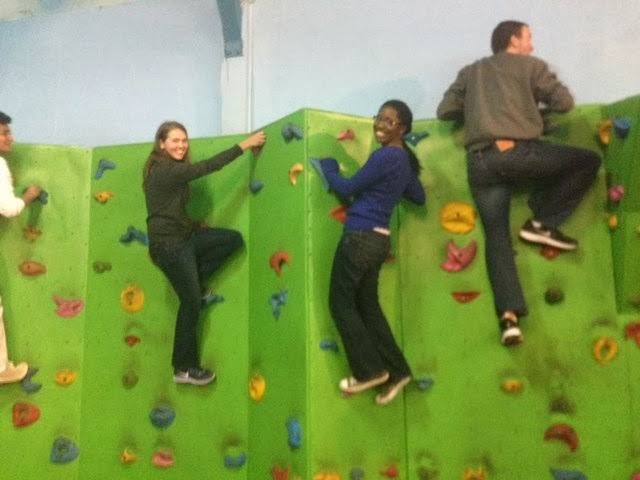 Caravan participants on the climbing wall at the Sderot indoor playground.

Ernest Hemingway once wrote, "The world is a beautiful place and worth the fighting for, and I hate very much to leave it." The Middle East knows much about beauty and fighting, for better or worse, but our experience in Sderot  revealed part of the human condition unexpected to most of us. While most of our time with the Caravan for Democracy through Israel was met with breathtaking sights -- Masada, Tel Aviv, Galilee -- the tragedy of Sderot's reality was exceptionally difficult to accept. More than anything, the impact of a constant threat on the lives of children was humbling. The population of the city with bomb shelters marred an otherwise peaceful city.
From the scars of war, however, emerged an inspiring reality. Not one steel-reinforced, concrete shelter looked as such. Thanks to JNF and Artists 4 Israel, each was adorned with graffiti and street art. Back in the States, it seems no two people agree on whether graffiti is legitimate art or not. It rose up from the hip hop movement of the 1970s and '80s in New York City, hip hop being a tool for youth to resist against oppression and beautify the cement and steel projects they lived in. It was a method to resist dehumanization with creativity and imagination, two truly human characteristics.
In Sderot, the painting of the bomb shelters, while different from traditional graffiti culture, embraces these virtues. Oppressed by violence, the city rose up with creativity; dehumanized into targets, they expressed their humanity; burdened with brutalist bomb shelters, they made their environment colorful, beautiful, livable.
As moving as our visit to Sderot was, and as sad as it was to see how children's lives are devastated by conflict, the resistance of the residents of Sderot to depression was uplifting, and definitely an inspiring thought to bring home with us.
PLANT TREES IN ISRAEL