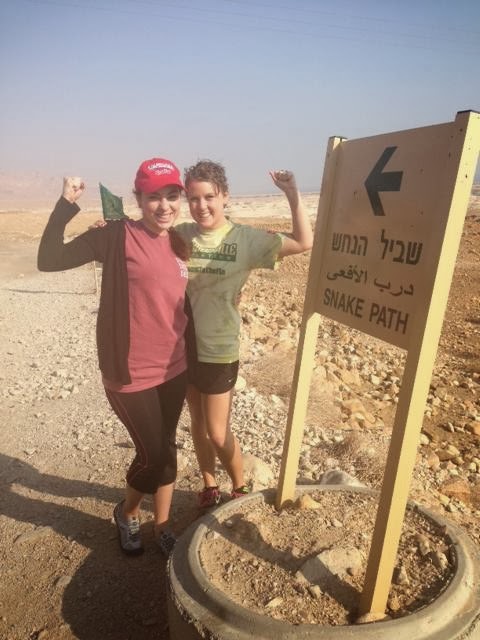 When my professor emailed me the application for Caravan for Democracy, I really thought nothing of it. After reading about the trip I felt I did not fit the profile of the students they were searching for. I am not involved in politics or student government on my campus. So I just set the email aside and went along trying to survive my heavy workload of video production classes.
Days went on and the application deadline was quickly approaching I made my decision not to apply. In class, my professor would not stop bothering me about the application. She really got under my skin when she said, "What kind of journalist are you, who doesn't want a free trip abroad? Turn this into a journalistic opportunity." After that statement there was no way I was not applying.

When I received the email that I made it to the second round where I would be interviewed it really did not see in that there was any possibility of me going to Israel. Now I realized I am going to have to do some research so I don't not bomb this interview. Before I did any research it came to my attention that all I knew about Israel was all my Jewish friends would go on birthright. My friends could never find the words to describe their experience in Israel; most said I just would never understand. Of course from being a news junkie I would read news stories, yet never in a lot of depth. I found my ignorance about Israel shocking and embarrassing.
When I first discovered I was going to Israel I don't think it really set in until the day I met the Caravan for Democracy group at the airport. The weeks leading up to the trip I decided I would take camera gear and make a documentary while I was over there-when am I going to be in the Middle East again?  I decided I would try to interview local Israelis to get their opinion on how they would like their country to be portrayed on the media. In my opinion the media only discusses Israel when it involves something with a negative stigma attached. Before I left, I decided that I would like to capture the Israel that the media does not report.
I could have never fathomed that this trip would be so life changing. When my friends would come back from Israel and say it was life changing I would just think of it as any other experience someone would have abroad. JNF managed to bring 29 of the most influential and intellectual students I have ever met. Students who are all leaders in their campuses as well as in their communities.
At the beginning of the trip Rabbi Leor told us when we go back to the states and tell them about Israel; they will not understand what our experience was really like. Now coming to the end of the trip I am now starting to comprehend what Leor was saying.
For example in this blog post I could try to describe in words what my time in Israel has meant, yet it won't do it justice. Yes I can talk about how I walked where Jesus walked, how I went to the Wailing Wall and overlooked the City of David with the call to prayer singing in the background. I can try to write these things in the most poetic way possible. But it's not worth even trying. Because there are no words that can describe the beauty and emotions I have encountered over the past week in Israel.

Luckily I brought video camera gear just to attempt to capture the real Israel. Soon I discovered that capturing Israel and taking in all of its beauty are two extremely different things.  I found myself engulfed in the stress of trying to capture the perfect shot for the first 3 days of the trip. It was once we reached the beaches of Tel Aviv I realized that there are moments of the trip that I must put down the video camera. I realized that I should be less concerned with trying to capture the essence of Israel in order for others to understand; first I need to take it in for myself.
Now that the 10-hour days of touring Israel is coming to an end, I have realized that I have no real focus for a documentary. And I am OK with that. I have been blessed with the opportunity of learning about Israel and how far the country has come in such a short amount of time. The trip made me realize that this is a country that is not just black and white. The complexity of this country cannot be fully comprehended in 10 days. I went into the trip with the expectations of just going through the motions like any other organized trip. This trip was one of the most educational, eye-opening, and surreal experiences of my life. I know that I have captured beautiful footage to bring back to the states. I am excited to make a promotional film that JNF can use to get other students interested in Caravan for Democracy. As an aspiring documentary filmmaker I learned that your story ideas are always subject to change and you must study your subject well before trying to tell their story. I now have gotten to know the story of Israel in a completely different light, I just have to promise myself I will have to come back and finish filming the story.
I feel utterly blessed to have gotten the opportunity to experience a trip like this will such an amazing group of students. This years group really makes me proud of my generation, even though those think that we are obsessed with social media and Miley Cyrus is the poster child of our generation, this group gives me hope. Knowing that this incredible group of youth exists makes me really excited for the future. I feel incredibly honored to be in this year’s Caravan for Democracy group. I cannot wait to tell our story.
PLANT TREES IN ISRAEL