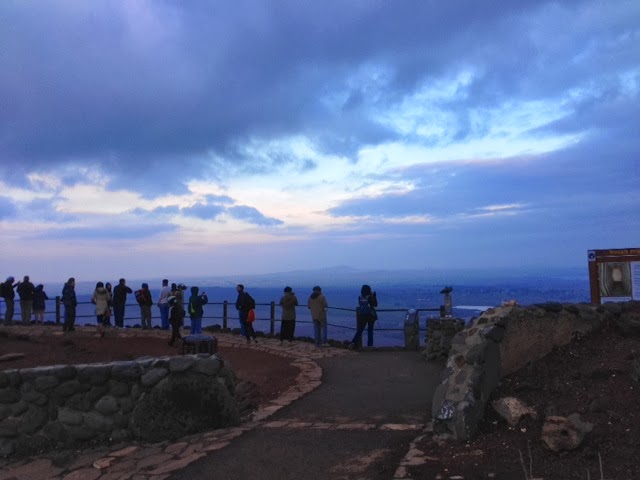 Caravan for Democracy mission to Israel (December 29, 2013 - January 9, 2014):
Twenty-five college student leaders of all faiths who have never visited Israel before were selected for this important 10-day educational experience. The trip includes touring; meeting political, cultural, and community leaders;  and exploring Israel's diverse democracy. Students who have served in a significant leadership positions in political, religious, athletic, cultural, and/or educational groups on campus were encouraged to apply. Participants will be posting their impressions of Israel here over the course of the next 10 days!


Monday morning saw the group visiting a variety of fascinating sites in northern Israel with the first half of the day spent around the Sea of Galilee and the latter half in the Golan Heights.  Our first full day in Israel, it certainly exceeded all expectations anyone on the trip had brought prior to arriving.

Going through life in America, it can be tempting to compartmentalize life into a series of convenient archetypes and assumptions.  Even on days when we find ourselves grow by leaps and bounds through new life experiences, typically such occasions merit a solitary theme to intake and reflect upon.  That said, Monday was unique in that it marked the first in my life that I was profoundly struck in two greatly different ways in the same day.


The first way in which I was impacted came early in the day, as our first stop was at the Church of the Beatitudes, in the vicinity of where scholars believe Jesus gave his famous Sermon on the Mount.  I think I can speak for many of the other Christian members of the group when I say that it was a most humbling experience to explore the area around the church while our guide, Yoni, gave a richly detailed explanation of the life of Jesus and his ministry in the area.  Paired with our subsequent visit to Capernaum, it was aweing to stand in the places we have read about our entire lives, at the roots of our faith we share with much of the globe.
To have left the day at these visits and headed back to our kibbutz would have left more than enough to soak in and reflect on, but we were far from finished.  As we made our way through the Golan Heights in the late afternoon, Yoni explaining the wars Israel had fought against its neighbors and Syria in particular, we entered an entirely different world that overlooked the same Sea of Galilee we had just toured around.  Finally, we made it to Mount Bental, which offered an unrivaled overlook for miles in all directions, including into Syria itself.
As an Army ROTC cadet at Texas A&M University with an active interest in foreign military affairs, I again found myself deeply moved for the second time today as Yoni took us into the underground bunker just as the dying light of the day began to fade.  Pitch black inside, huddled in a tight space, it was just Yoni and his small flashlight as we stood and absorbed his explanations of the past and present conflicts Israel has with its neighbors.  We heard of the key players in the region and the politics at hand, the forces arrayed and the weapons in use.
Most of all though, one of the last things Yoni said will stick with me forever.  Remarking on the at times staggering odds the Israeli military has faced in its wars with its neighbors, he said that what had helped the Israeli forces to pull through time and again was that they knew that the line was drawn at the borders where they stood.  Defeat meant that ten miles behind them their homeland, filled with their families and friends, would be completely defenseless.  As a future military officer of a country that has not had to fight a war on its own soil since the Civil War, this really resonated with me, and helped me to have a better understanding of Israel’s position in its unforgiving geopolitical area.  As I thought on this point, I gained a new respect and empathy for the Israeli military as one of the United States’ closest allies today.  It is unbelievable that only a day has passed, and I cannot wait to see what tomorrow brings!
PLANT TREES IN ISRAEL