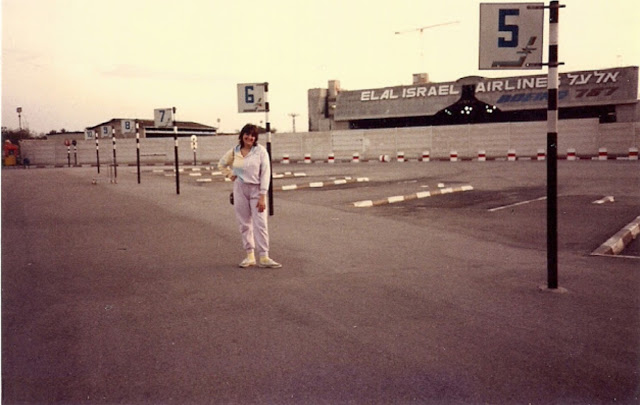 I attended AMHSI in January 1985 -- 35 years ago this month! I can't believe it was so long ago, because the memories are still so vivid.
I remember sitting in the hallway of my dorm, Wohl, on that first night. We were all tired and cranky and in shock by the amount of homework we were given right away. But that first night drew us together and we became an instant family -- helping each other, crying with each other, and laughing and sharing all night long. I still say, without a doubt, that my session at HSI was THE BEST time of my entire life! I have been to Israel 15 times, but no trip was as influential, life-changing, academic, or comfortable as my time there with HSI. That's when Israel truly became my home.
HSI didn't end in 1985. It continues to be a strong part of my life and shape who I am. Throughout the years, HSI has wandered into my life when I least excected it:
Example 1: I always knew I wanted to go into Jewish education for a career, but HSI helped put me on that path. In college, I majored in Jewish Studies. I was actually part of University of Florida's first class receiving a BA in Jewish Studies. I used my source books from HSI to help me study for my classes at UF. Needless to say, my grades at UF were impeccable!
Example 2: While at HSI, I became very close with my madrichah, or youth counselor, Pnina. She had never left Israel, so leaving her at the end of the session was one of the toughest things. I didn’t know when I would see her again. We wrote letters for years (there was no email back then!), but eventually we lost touch. I was at a Jewish education convention in the early 1990s in Miami Beach and I called the hotel front desk to ask for something and was told it would be sent right up. When I opened my door, I almost fell over. Pnina was standing there! She moved to Miami, got a job at the hotel, and was delivering what I needed to my room. We looked at each other and started screaming and crying and couldn't stop hugging! We stayed in touch for a few years, but then she went back to Israel and we lost touch again.
In 1999, I moved to Boca Raton. On my youngest daughter's first day at her new preschool, she was 2, all the little 2-year-olds were crying and it was a madhouse! I was overwhelmed with dropping off my daughter and starting a new job at the synagogue, so my mind was adrift. As I was walking out of the room, a woman came up to me and told me her son was in the same room and was crying, and asked me to please check on him. I went back to do that and when I came back out to tell her he was fine, we started a conversation. I was listening to her talk, with her strong Israeli accent, and all of a sudden, at the same moment we both just stopped and started screaming. It was Pnina! And her younger son and my younger daughter were the same age and in the same preschool class! We couldn’t believe it. To this day, Pnina and I keep in touch.
Example 3: In 1993, Rabbi Morris Kipper z’’l married my husband Jason and me. He was a huge influence on my life and it was so meaningful to me to have him officiate. He made it possible for me to attend HSI when I was a teenager.
Example 4: When my husband and I first moved to Boca, we didn’t know many people. Within the first few months of our move, we heard about an HSI alumni reunion in Boca. I went to HSI but my husband didn't (although his younger brother did). My sister also went, but her husband didn’t. So we decided to all go to the reunion together. The husbands could hang out while we talked about HSI with the other alumni. We wound up sitting with another couple -- Renee was also an alumni, but her husband, Gregg, was not. We all started talking and became fast friends. For years, we spent almost every weekend socially with Gregg and Renee. Then they moved to another city, but we always kept in touch.

Out of tragedy a renewed connection
Just over five years ago, Jason and I were at a Chanukah celebration at a local shopping center and we ran into Gregg and Renee. We sat and talked for hours and promised we would get together very soon. Jason and I couldn’t stop talking about them after and we were so happy to see them. Gregg later told me he and Renee felt the same. Sadly, a few weeks later, Jason died suddenly. Gregg and Renee were there for us. A little over a year later, I saw on Facebook that Renee had died suddenly and I instantly reached out to Gregg.  We helped each other over the next year, mostly talking through Facebook and Words With Friends. We asked each other "widow" questions and guided each other. About two years ago, Gregg and I made plans to have dinner. Two old friends getting together to help each other through the grieving process. Nothing more was ever on either of our radar. Well, that dinner turned into a five-hour meal and much to both of our surprise, we have been together ever since! Neither of us ever imagined a life without our spouses. We certainly never even came close to imagining a life together. We joke that we met 21 years ago for a reason! And we met thanks to HSI.
Example 5: Both of my daughters attended AMHSI. Elana went in winter 2012 and Paige went in spring 2014 (a combined program with The March of the Living). Both had amazing experiences. Paige, who had some learning challenges, swears her success in college can be attributed to the skills she learned at HSI. Both girls say their independence at HSI helped them adjust to college so much easier than their peers. And now both girls are pursuing careers in the Jewish world, which they both attribute to their love of and connection to Israel. In fact, Elana had a fellowship out of college with American Hebrew Academy. AHA is located across the street from Temple Emanuel in Greensboro, NC. Rabbi Fred Guttman of Temple Emanuel, the synagogue Elana was affiliated with while at AHA, was the rabbi and principal of AMHSI when I was there. I remembered him fondly and he remembered me.
I have been lucky enough to visit the Hod Hasharon campus many times through my visits back to Israel. Each time, I am amazed by the growth of Hod Hasharon but yet the familiarity of the campus. I was in Wohl when I attended and so was Paige, although the renovated version, when she attended. I walked around the campus, reconnected with old familiar friends, met new people now connected with AMHSI. When Paige was a student, I was so lucky and proud to be able to travel to Israel with Jason at that time and take him to the Hod Hasharon campus to show him around. When he got to the campus and saw Paige there, he just started to cry. He was so happy to finally be there and be part of what I had been talking about for 25-plus years and to see how much Paige had grown and matured in the short time that she was there. He said, that even though he was only there for a few hours, he finally understood why it was "home."
Alexander Muss High School in Israel will always be home for me and for my children. It will always hold the fondest of memories and the greatest of stories. It will always be the connection between me and so many of my friends that I still keep in touch with (mostly through Facebook because they are all over the country), and it will always be the place that I hold so deep in my heart. I am excited that Gregg's daughter will attend this summer, and I know Renee z’’l is smiling in heaven that Sara will continue her HSI legacy. I pray my grandchildren will one day get the opportunity to experience HSI too.
PLANT TREES IN ISRAEL