In the JNF Kitchen: Yerucham challah once made for President Ezer Weizman 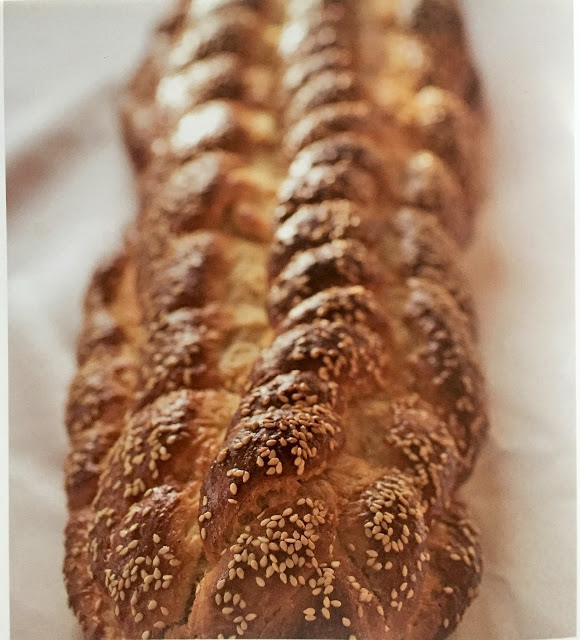 This recipe of the week is a traditional challah, brought to us by Mas'uda Swissa, who was born in Casablanca, Morocco, and immigrated to Israel in 1963. Mas'uda now lives in Yerucham, a town in the Negev desert that's rich in culinary traditions brought by Jews from North Africa and the Middle East.

She once made this exact challah for Ezer Weizman, the former president of Israel, who was visiting Yerucham. It came out perfect, but she was too shy to present it herself, so someone else gave it to him.

In 1963, after Morocco put a seven-year halt on Jewish immigration, the king granted the Jews one week to leave the country. Mas'uda at the time was married with a 2-year-old daughter and seven months pregnant, but on Tisha B'av she and her family took a bag of clothes and left everything behind.

The families that immigrated together formed strong ties during the weeks-long journey -- men organized a minyan (prayer group) and the women prepared food and took care of the children together. They naturally decided to all stay together once they arrived in Israel no matter which town they were sent to. And that town was Yerucham, a focus of JNF's Blueprint Negev.

"We all remained in Yerucham and I've lived my life among warm and good people who love one another and are happy to help," Mas'uda says. "I love Yerucham. I raised seven children here, may they be healthy."

Yerucham does not have a restaurant, but its community saw a desire to bring visitors in and created a program that feeds, educates, and entertains travelers. Residents generate the hospitality industry out of their homes, telling guests about their culture and background while educating through recipes. Women whose children have since moved out host travelers in their houses for home-cooked meals -- some of the best in Israel!

Hosting is part of the soul and tradition of the families in Yerucham and was an integral part of Mas'uda’s upbringing. "When we were small, in my parent's home, may they rest in peace, we would always say that without guests, one does not eat,"  she says. We never sat at the table alone. All my guests are special. I always receive them with a smile."

2.2 pounds (1 kilogram) of sifted flour
1/2 cup sugar
3/4 cups water
2 heaped tablespoons dry yeast
1/2 cup oil
1 heaped teaspoon salt
1 egg (for coating)
2 tablespoons sesame seeds for decoration
Directions
Place flour in a bowl, add the yeast, 3 cups water and the sugar, and work into a dough. Add the oil and salt, then work the dough till soft and without lumps.

Wrap in nylon, like a Ziploc bag but not in cling wrap, and let rise in a warm place for 10 minutes.

Knead dough well again, cover, and set aside to rise for another 15 minutes.

Place the plait in a paper-lined baking dish and brush over with the egg.

Roll out three of the remaining (smaller) balls into strands, pinch together one side, braid into a plait, pinching together the other end, and place the braid on top of the egg-covered plait. Smear the upper plait with the egg.

Roll out the remaining (smaller) balls and braid into a corkscrew shape. Then place this over the upper plait, covering it too with egg and sesame seeds

Place the challah in an oven preheated to 350F for about 30 minutes, until it begins to brown. The same dough may be used for baking rolls.

Women of Yerucham have created a cookbook, "Flavors & Delights of Yeruham," which is produced and sold by Atid Bamidbar (with an English translation) and captures the culinary riches of the town focuses on the personal stories of the cooks, their recipes and the flavors and atmosphere that surround them.


"'Flavors & Delights of Yeruham' is a human and culinary journey that arouses a sense of discovery akin to that we feel when, on our travels abroad, we meet with the locals and taste their dishes in restaurants frequented by the locals themselves, an experience of truly tasting local flavor "This book is first and foremost an invitation to visit this unique town, to taste its favors, to visit its lake, its Crater and its archaeological sites, and to participate in the local Yeruham experience-" Amram Mitzna