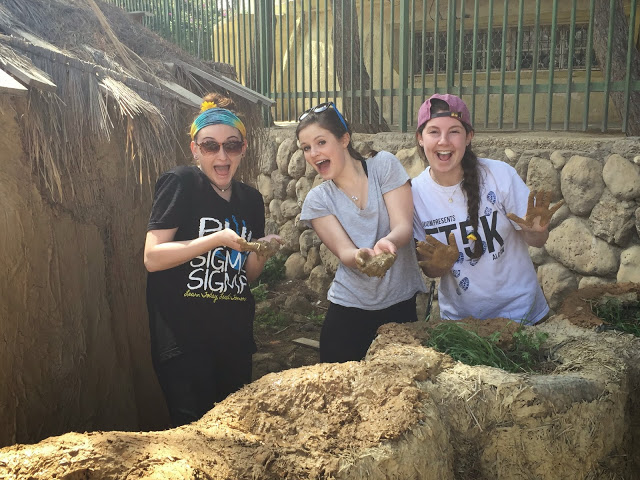 Participants in our second Alternative Spring Break trip of the season are off and exploring Israel while physically working the land. And they're having a ball! Read on for an update from Michael Newfield, a student at UMass Amherst.

We have had quite an exciting first day over here in the homeland!

We kicked off our adventure at the Earth's Promise sustainable farm in Be'er Sheva, where we split up and participated in multiple projects to improve the well-being and sustainability of the the local community. In the blink of an eye, 42 college students transformed into farmers as we began preparing the unused plots of land for planting food.

We mixed compost and soil and hacked away to make the perfect mixture for growing food. Simultaneously, our team worked on other projects such as repairing the farm's kitchen roof, decorating a water tub, and cleaning and weeding the neighbor's yard so her grandchildren can now frolic in a healthy environment.

Following our departure from the farm, we went to a local bilingual school for ages 6-12. The director enlightened us about the Jewish-Arab duality of the school and explained how it functions with half the students speaking Hebrew and the other half Arabic.

The classes are required to enroll half of their students as Jews and half as Arabs, accompanied by two teachers representing both languages. It warmed our hearts to see Jewish and Arab children learning side by side in an accepting environment, and we are thrilled about this new social movement.
PLANT TREES IN ISRAEL