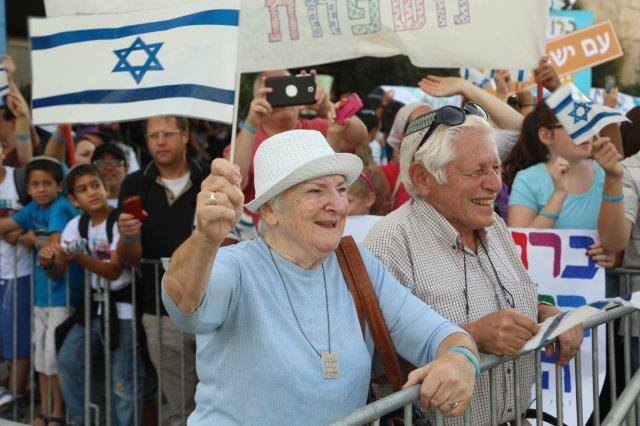 It's hard to imagine a time before Nefesh B'Nefesh -- before chartered, celebratory flights brought scores of olim from around the world to live and work in Israel. But Paul Freedman made aliyah in the ‘90s, and remembers it well. Paul, who was the International Director of USY, met his wife Nina, a lifetime Bnei Akiva member, in 1957 in Israel. The pair married in England, and finally returned to Israel on July 4, 1991, this time for good.

During that time, they experienced marked differences in the aliyah process compared with how it’s handled today. Nowadays, for example, Nefesh B'Nefesh files all paperwork and gives olim their teudat zehut (identity card) on the plane. Back then, new immigrants had to go in person to the Misrad Hapnim (Ministry of the Interior), potentially working for months to square away paperwork now done in minutes with Nefesh B'Nefesh. The organization, underwritten in part by Jewish National Fund, provides a support system that was unheard of when the Jewish Agency was the only name in the aliyah game. Individuals and families who make aliyah with Nefesh B'Nefesh get a call once a week in the first few months of their move to Israel, and they are nurtured throughout the transition process.


Today, Paul and Nina personally greet every Nefesh B'Nefesh flight that arrives each summer to celebrate their aliyah 26 years ago.

They enjoy giving back to the community in other ways as well. They host teenagers in their home for Shabbat meals -- sometimes up to 60 kids at a time. The young adults sit on chairs, couches and the floor, as Nina teaches them a niggun (tune or song) from her childhood. The couple has hosted many teens over the years. In fact, on one occasion, a young woman who walked by Freedmans’ house told them she had joined them at a Shabbat dinner years earlier, and was  inspired to make aliyah after that evening.

The Freedmans also feel passionate about bringing lone soldiers to the US to tell their stories, and about cultivating communications between Israel and North America by sponsoring speakers in the US and Israel. One of the Freedmans' great joys was that their three sons were lone soldiers in the IDF (before the Freedmans made aliyah in the '90s). Many friends said they were crazy at the time, but plenty of others expressed their support.

Today, the Lone Soldier Program at Nefesh B'Nefesh is one of its biggest successes; the organization offers support and resources to soldiers volunteering from abroad, when before there was virtually no system in place to help these young men and women feel less lonely.

Not surprisingly, one of Paul and Nina's prides is their daughter-in-law Doreet Freedman, the current Director of Strategic Partnerships at Nefesh B'Nefesh.

Paul and Nina's sons, grandchildren, and great-grandchildren live in Israel. What more could parents with a passion like theirs ask for?