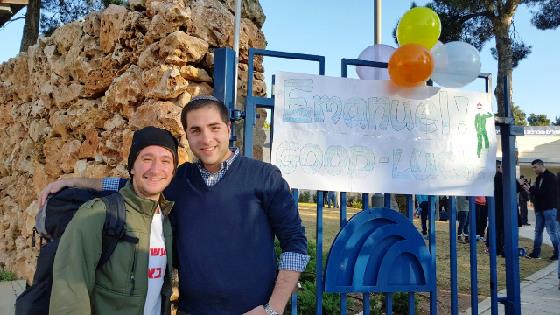 It was love at first sight. Emanuel Goss had never been to Israel before, but after spending a semester there in the 11th grade, he knew he wanted to make aliyah. Now that the 26-year-old former Philadelphia resident has realized his dream, he is at work on another one: He wants to become a paratrooper in the Israel Defense Forces.

“I went to Akiba Hebrew Academy (now Jack M. Barrack Hebrew Academy), but took a semester off to attend the Alexander Muss High School in Israel,” said Goss, referring to the Jewish National Fund (JNF) study abroad program for American high school students located in Hod HaSharon. “After finishing at Akiba, I came back to Israel for a year through Young Judea and wanted to stay, but my parents convinced me to come home for college.” Goss earned a bachelor’s degree from Temple University.

After spending two years in the workforce, Goss led a Taglit-Birthright Israel trip, and in February 2015, returned to Israel with the intention of staying for a few months to volunteer. His father, JNF Philadelphia board member Chuck Goss, asked JNF CEO Russell Robinson if he knew of any meaningful volunteer opportunities for his son in Israel, and Robinson contacted Yoel Rosby, JNF’s liaison at Ammunition Hill in Jerusalem.

Ammunition Hill is one of many Israeli national memorial and heritage sites supported by JNF, and Goss’ family is involved in a project to build an overlook there that will pay tribute to the soldiers who defended and liberated Mt. Scopus, a Jewish enclave surrounded by Jordanian forces, during the Six-Day War in 1967. In 2008, JNF erected a Wall of Honor at Ammunition Hill to commemorate Jewish soldiers from around the world. What started with only 15 plaques, today it contains the names of 333 men and women inscribed on it.

“Fierce fighting took place here between Israeli paratroopers and Jordanian forces,” Rosby explained. “Israelis consider Ammunition Hill a symbol of heroism because of the moral code and values with which the paratroopers fought, the same code and values with which Jews around the world fought for their countries of residence. This is why any Jewish service man or woman, anywhere in the world, has the right to be honored here."

Rosby suggested that Goss help with creating an Internet database of the names on the Wall of Honor to enable visitors to Ammunition Hill’s website to learn more about the honorees. "Yoel wants people to be able to connect to each plaque in a personal way," Goss said.

Goss accepted the challenge and began the project in March. Throughout his time at Ammunition Hill, he met regularly with the many people who worked there, including its CEO, Lt. Col. Katri Maoz, who served as deputy brigade commander of the 55th Paratrooper Brigade, and the director of marketing, Major Alon Vald, who served in an elite IDF unit and also in the Shabak, Israel’s security agency.

These and other IDF veterans, as well as the stories he collected for each plaque, made a lasting impression on him. “It was the most incredible thing for me to meet these heroes. People who risked their lives for others yet don’t see themselves as heroes," said Goss, whose experience working with the soldiers directly influenced his decision to make aliyah just three months into the project.

It also inspired him to want to be a paratrooper, and although he will have to try out and knows there is no guarantee he'll be admitted, Goss has been preparing by participating in a pre-army training program for lone soldiers, called Tzevet Lochamim (the Fighters Group).

"The first two months after my draft I’ll be taking an intensive Hebrew course. After that I try out, and will be transferred to whichever combat unit I get into," he explained.

Goss was originally scheduled to report for duty this coming April, but in early December he received a call asking if he would be interested in moving up his draft date to December 15. He couldn’t have been happier. With his project nearly complete, Goss jumped at the chance and accepted.
PLANT TREES IN ISRAEL