Summer on an Israeli field of dreams: To these kids, baseball is life 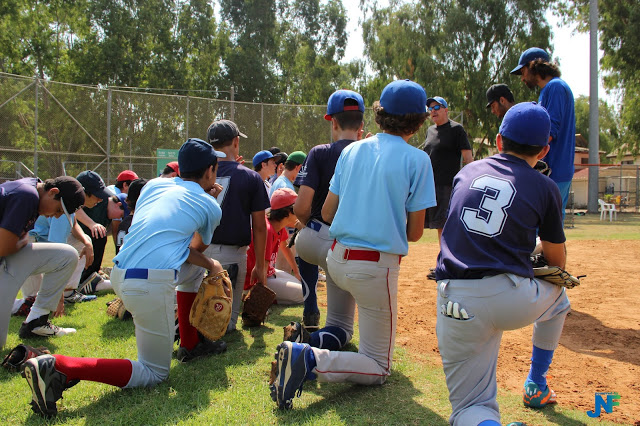 As part of our #JNF #SummerLovin series focusing on lesser-known Israeli summer happenings that also happen to be #PoweredByJNF, we bring you the story of a baseball camp where young players dream big.

Ido Peled wants to play in the Major Leagues one day. So does Uri Federman, Nadav Schwartz, Yair Chen, and virtually every other Israeli boy crowded into the bleachers of a Petah Tikvah baseball field on a sticky late morning in July.
For these 12- to 15-year-olds attending summer baseball training camp in Israel, America's favorite pastime is far more than just a pastime.
"Baseball," Gal Partouche says simply, "is my life." His baseball buddies would surely echo the sentiment.
Uri Federman checks the Major League Baseball website daily. Ido Peled – dressed on this Tuesday in his New York Yankees Derek Jeter jersey -- watches YouTube baseball videos late into the night before falling asleep. When they're not at camp furiously practicing pitching, batting, and catching, the boys communicate about all things baseball via the chat app What'sApp. Want to see these guys get animated fast? Ask them about the game. Anything. Favorite teams. Favorite players. Stats. They know their stuff.

Despite the palpable enthusiasm on and around this diamond a few miles east of Tel Aviv, however, baseball has a way to go before it hits Israel the way basketball or soccer has.
This is partly due to a shortage of baseball fields – and some that do exist are sloped, covered with rocks and thorns, or lack adequate lighting. Plus, the game has yet to widely take hold outside the realm of baseball-loving expats and their children.
The JNF-supported Israel Association of Baseball, an umbrella organization for all things related to the game in Israel, wants to change that through programs like this baseball summer camp filled with intensive coaching, drills, and games.
"We want to make it an Israeli sport," says Margo Sugarman, an immigrant from South Africa who works in the marketing department for the IAB. As recently as eight or nine years ago, she says, it was mostly immigrants from English-speaking baseball-playing countries on Israeli fields. That's beginning to shift.
Fifty players from all over Israel have signed up for this year's IAB baseball camp, which meets from Sunday through Thursday from 8:30 a.m. to 1:30 p.m. It's just one of the programs run by the IAB, which was founded in 1986 by a bunch of expats who wanted to bring the fun, camaraderie, and sportsmanship of the game to Israel. These days, Nate Fish, a former minor league player from Ohio and the self-described "King of Jewish Baseball," serves as its national executive director.


The IAB runs teams in five leagues starting with boys and girls age 6 and going all the way up to adults. Another IAB project, "Baseball Le'Kulam," or Baseball for All, brings together Israeli kids of all backgrounds – religious and non-religious Jews, Muslims, Christians – as an exercise in coexistence.

"When you're a team, you got to stick together," says 15-year-old Uri Federman, who lives in Jerusalem but stays at his aunt's house near camp during the week so he can spend summer days immersed in his favorite sport. "You can't win without teamwork. When we play, we don't think of the differences."
Or, as Coach Avraham Dov Rosenblum puts it, "When it's baseball, it's baseball."

Coach Avi, as he's known on the field, can relate to being young and baseball-obsessed. Growing up in the San Francisco Bay Area, he spent time in the Oakland A's dugout as a toddler when his dad worked as a sports broadcaster and won a 2010 award from the Jewish Hall of Fame in Northern California. He moved to Israel to join the semi-pro Israel Football League and will enlist in a combat unit in the Israel Defense Forces in the fall.
In the meantime, he's out on the field at summer camp, alternately joking with his young charges and doling out tough baseball-coach love. And showing the kids how it's done -- as part of the Senior National Team that made an impressive showing at the European Baseball Championships in Vienna this summer.
One of Rosenblum's players, Gal Partouche, moved to Israel last year from Irvine, California, where he watched baseball on TV, went to games and rooted for the Los Angeles Angels. Leaving the only home he'd ever known was difficult, he says, but knowing he'd get to keep playing baseball in his new country eased the transition.
"It helped a lot," the young catcher said, leaning against the fence during a break from drills on the field. "It kind of helped me remember how it was in the States. It makes me feel more at home."