The future of Israel activism is bright: Alexa Goldstein, 'not no nice Jewish woman' 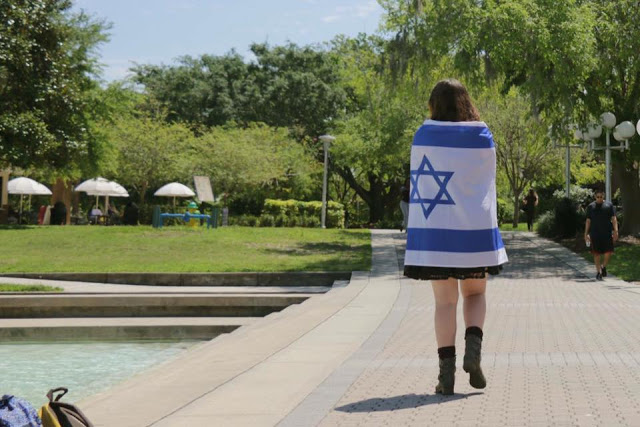 Jewish mothers since the dawn of time have drilled it into their sons' heads that they must find their "Nice Jewish Girl," abbreviated NJG for convenience.

What is a NJG? A girl who went to Hebrew day school with you or sat next to you at a youth group convention. She held your hand on all 10 days of Birthright. She has chocolat-ey curls, soulful brown eyes, and elegance that reigns supreme during her Dvar Torah at a Hillel Shabbat. But in today’s day and age, the Nice Jewish Girl stereotype is outdated. Even the term "Nice Jewish Girl" no longer applies to the strong, alpha females I surround myself with at every Hillel event. I don’t consider myself a Nice Jewish Girl. I consider myself a Not So Nice Jewish Woman.

A Not So Nice Jewish Woman, abbreviated NNJW, comes in all shapes and sizes. Her hair can be brown and curly, blond and straight, wavy and red, or pink and shaved at one temple. She loves herself without a stitch of makeup or with smoky eyes and wingtip eyeliner sharper than her sense of humor.

She doesn't fill conversations with empty chatter, but with topics ranging from the Israeli-Palestinian conflict to the week’s Torah portion. She can express her worth and communicate her needs, and is comfortable being herself. A NNJW encourages women's empowerment in all aspects of life through friendship and mentor-ship. I talk about what it means to be a NNJW not just to brag about the women in my community but to discuss their roles in the future of Judaism and Israel.

I went to Hebrew school in our conservative synagogue and Hebrew day school for middle school. I led Tefillah every morning and had lots of questions for my teachers about the Torah. When I was 13, my family and I went to Israel for my bat mitzvah and I read my Torah portion at the conservative section at the Kotel with the same aplomb I applied to anything that had to do with my Jewish identity. I joined the youth group United Synagogue Youth even as I was enrolled in a public high school. I continued learning about Judaism in the religious sense, but USY strengthened my connection to my Jewish culture. I met hundreds of other teens with the same passion as me and I loved the surprised looks on my parents' faces when they asked about Friday night plans and I would answer: "I’m going to services with my USY friends!" After high school graduation, I left for the University of Central Florida, which I currently attend. There was no better place for me to find an outlet for my passion for Judaism than Central Florida Hillel and I quickly got involved with the Jewish Life committee.

I share my Jewish journey to show how being Jewish is stitched into every aspect of my life. The dozens of clubs I was a part of, the Advanced Placement classes, my social life, all of it co-existed and was complemented by my connection to my heritage. I consider myself religious, but not observant, and I am proud that being religious has enriched my life. To be a NNJW with a connection to G-d means adopting Jewish values into your mundane day-to-day activities and successes.

I say the Modeh Ani in the morning, plan student government events, ace my quizzes, have lunch with friends (so long as there’s no pork), study at Hillel, and say the Shema before bed. Religion doesn't hinder my feminine sovereignty, as some might think; it bends to my will and supplements my life with a constant, underlying theme. I’m not telling anyone they need to memorize the Amidah to have a fulfilling life, but I urge you to accept your heritage.

Judaism is more than a religion, it’s an identity, and integrating just one thing into your life that reminds you what it is to be Jewish will help you connect in a way that being forced to go to services on Rosh Hashanah and Yom Kippur never did.

Judaism doesn't have to be a rigid institution that heralds patriarchal beliefs over the heads of people who feel they have no connection with anything but a matzah ball on Passover. Leading services strengthened my confidence by forcing me to stand vulnerably in front of a crowd of people and sing in a foreign language. The faults I sometimes find in Judaism teach me that loving something doesn't mean blindly accepting it, but learning from its shortcomings. Questioning something doesn't mean you disrespect it. It was from my Judaic studies that I developed my first notion as a NNJW: blindly accepting things does nothing to better you as an individual. Inquiry and debate take you to new levels of understanding.

The light side and the dark side

My relationship with Israel is not as old as my relationship to Judaism but the depth of my love is no less great. I went to Israel for my bat mitzvah, a second time for Birthright, and a third for a two-month internship through Onward Israel. The way I see it: Birthright gives you your crush on Israel, but Onward and Masa programs knock you head over heels in love. Staying directly in the center of Jerusalem, going on fun trips with my group, and meeting the beautiful people of Israel showed me the light side of Israel. My internship with the Sderot Media Center showed me the dark side.

Sderot is a two-hour bus ride from Jerusalem, located a mile away from the Gaza strip. It has received over 200,000 rockets from Gaza since 2001 and the city has invested millions of dollars in equipping every square inch of its streets with bomb shelters. While I accompanied my boss on tours of rocket galleries and visited a JNF children’s playground that doubles as a bomb shelter, cranes can be seen across the city. Families are loading up their cars with their kids and moving to this beautiful, cursed city. Sderot taught me that not only do I love Israel for its beauty, I love it for its fearlessness in the face of adversity. I came home and told my parents that there is nothing more Israeli than the city of Sderot.

I learned a word this summer that encompasses the mentality I now associate with Israel: tachles. It means to be blunt, direct, and forward in what you want. This is where I got another one of my NNJW notions: Never apologize for your opinion or expressing yourself. Being tachles applies both to your relationship with Israel and yourself.

Every Jewish person is tied in some way to Israel. Be tachles in your support. Educate yourself so you know how to be an asset through advocacy or hands-on involvement. Going to AIPAC policy conference, joining pro-Israel organizations, opening up a dialogue with peers about the conflict...it all helps. I recently attended the JNF conference in New York and it taught me that it's possible to educate about Israel, celebrate Israeli culture and innovation, and invest in improving the standard of life in our ancestral homeland all at once. Be tachles in expressing your connection to Israel. Attend Israel education events, listen to Israeli music (I personally love Hanan Ben Ari), or have an Israeli food night with friends. No actions or words are too small.

A call to action

A Not So Nice Jewish woman is tachles in both her support of Israel and in how she represents herself. Sometimes people would prefer a less outspoken woman, but in the end I have always been happier articulating how I feel and what I want. You cannot receive what you don’t ask for. I walked into Hillel, pointed my finger at the Jewish Life committee, and became a student intern in a semester. I came home from Birthright, pointed at Israel on the map, decided that it was where I needed to be for the summer, and got on the next program out of here. I heard about the JNF conference and told the staff member in charge of my delegation I would be there. It took me a long time to get here, but being tachles is an integral part of my identity now.

NNJWs play a crucial role in the Jewish community and the direction of Judaism and Israel. Strong females have shaped the world since the beginning of time and now is the moment for us to further empower ourselves and take charge, if we haven’t already.

Take charge in shaping the Jewish landscape of your community. Be the voice speaking out against anti-Israel sentiment. Be an example for the Nice Jewish Girls still worried about making sure everybody likes them. Show them how great life can be when you take challenges head on, when you obliterate glass ceilings, and when you take "no" as a light suggestion. Be a Not So Nice Jewish Woman for yourself, for your Jewish Identity, and for the land of Israel, and never look back.
PLANT TREES IN ISRAEL