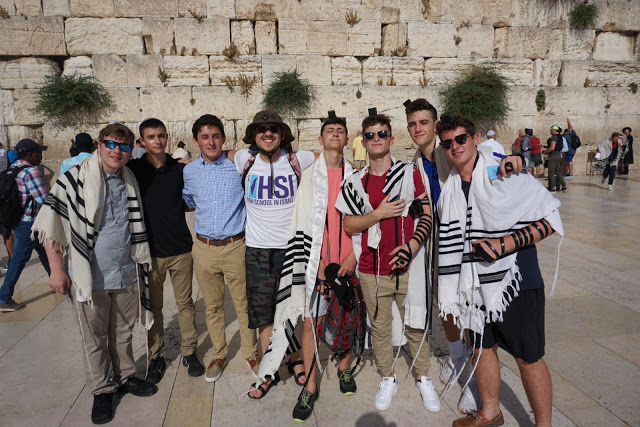 This summer, Mason Solomon of Weston, Florida, attended Alexander Muss High School in Israel, a study-abroad program that turns Israel into a classroom. Here are his reflections on a life-changing Shabbat the students spent in Jerusalem.

On our overnight in Jerusalem, we got to experience the beauty of Shabbat in the holiest place on Earth for the Jewish people. That night was one of the most incredible experiences of my life. We started off on a long walk in the sunset to the Kotel. The streets of Jerusalem Shel Zahav, the city of gold, shimmered brightly. The roofs of the old stone buildings reflected the light of the desert sun onto the people walking in the street. It was a beautiful walk through the quiet streets of Jerusalem. We had seen those streets before so vibrant and busy, but now they were completely closed down for Shabbat.

We arrived at the wall to see masses of people in white clothes and black hats all coming together to celebrate. We walked down the stairs that connect the Old City to the wall and joined the hundreds of people there to celebrate Shabbat. Right away, my friends and I jumped right in. We went straight to the wall and got through masses of men with long beards and huge hats. It was surreal how they were all praying so deeply and intently. We found a space on the wall and we took a moment to pray and take in this Shabbat at such a holy place. I pushed my head up against the wall and held my hands flat against it. As I began to pray, I noticed each crevice in the wall. I felt myself connecting to the wall as I had a long, meaningful moment that felt like an eternity.

After this, my friends and I went around the plaza to see what was going on. As we explored, we watched a group of IDF soldiers praying together. We approached them and their faces lit up as we shook their hands, thanking them for their service and wishing them Shabbat Shalom.

As we went on, we saw a huge group of men, both old and young, huddled around a table. They were slamming it with their fists and singing songs, and we watched for a bit before deciding to join them. Right when we approached them, they took us in the huddle like brothers and we welcomed in Shabbat in the arms of Jewish men, just like us, we'd never met before. We sang, danced, and celebrated Shabbat together. It was a truly special experience.

We caught the attention of a rabbi who decided to approach the huge group of boys from our program. The rabbi looked familiar, and it turns out that he was the same rabbi who helped me wrap tefillin for the first time in my life at the Kotel weeks before. What a small world. He got us into a huddle and told us that he wanted to teach us some lessons, and we were all eager to hear what he had to say.

His most touching teaching was that all Jews share one soul, and because we were spending Shabbat at the Kotel, we were uplifting the souls of all Jewish people around the world. He led us to sing Am Yisrael Chai on behalf of the people who could not sing at the Kotel that night. It was so eye-opening to realize that us being at the Kotel for Shabbat was completing a mitzvah for those Jews who couldn’t. As we were leaving, we hugged the rabbi like a brother, and finally left the wall area to meet up with the rest of the group.

More #MussMagic
At a high school like no other, Israel is the classroom for six weeks
'I wish it would never end," teens say of four-month AMHSI adventure
Judaism lost and found: One 'loud and proud' student's story
What do Sheryl Sandberg and singer Matisyahu have in common?

It was clear our lives just changed. There was lingering happiness in all of us. We made a huge circle and welcomed in the Sabbath as a family. As we were singing songs and giving each other long, genuine hugs, I felt something special. I can safely say I have never felt more connected to the people around me than at that moment. Each hug was heartfelt and filled with love, and I have never felt so deeply connected to people around me like that before.

Before leaving, I took one last look at the wall and thought about all Jews around the world who were praying to it on this Shabbat. I realized how lucky I was to have spent my night there, in person. I made sure to say "see you later," insinuating that I will be back to the Kotel again soon.