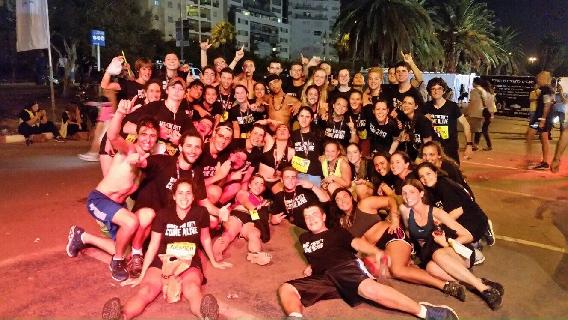 Hannah and Beatrice have travelled a long way from Boston to run through the normally crowded streets of Tel Aviv in the city’s seventh annual Tel Aviv Night Race. In the minutes before the race, they're dancing and screaming, along with a crowd of school friends and 20,000 others participants.

Beatrice Fellman and Hannah Avery Peck, 16 and 17 years old (pictured right) are in Israel for a semester at Alexander Muss High School in Israel, which offers its students high school credits along with a taste of "authentic Israeli life," according to Mordechai Cohen, AMHSI's head of school.

This was the school's third year bringing students to participate in the Tel Aviv Night Run, which this year started at 8 p.m. on a Tuesday night in late October. As motorists across the city honked, cyclists swore and buses swerved around complicated detours leading up to the race, some 20,000 participants armed themselves against the night with glow sticks, brightly colored racing vests, and the roaring, pulsing beat of dance music.

The students from AMHSI led the pack, holding themselves back from bursting through the starting line and listening impatiently to greetings from Tel Aviv Mayor Ron Huldai, who announced that the annual run was going on -- not despite the current wave of violence across Israel, but in the face of it.

Huldai's encouragement could barely be heard over the screaming approval of the crowd and the thump of the speakers, pulsing in time with the waiting runners’ heartbeats. Few runners needed the pep talk, as the crowd congealed into a mass of straining black T-shirts, ready to smash past the starting line.

All of the AMHSI students were stoked to be there. "This is awesome, this is so fun," Hannah said breathlessly before the run.

Cohen emphasized that the school takes all necessary security precautions before outings; the Night Run required separate permission. Despite the headlines, life at the school has been quiet and recent events have cemented the students' allegiance to Israel. "They’re living a part of history," Cohen said.

Another Boston native, 16-year-old Emily Amouyal (in the photo at left wearing blue shorts), had been to Israel before with her family, but said AMHSI is completely different. "It definitely feels like we live here. Our teachers are really experts in their field, and we see things through more of a lens of the people who actually live here, rather than tourists."

The motto for this year's Night Run was "Don’t stop running," which gave the students an authentically Israeli feeling. As the group raced through the car-free streets of central Tel Aviv, they stopped at refreshment stations, cheered on by local teens gathered on the grassy medians, and paused only for the occasional selfie.

The city, and the students' energy level, remained upbeat till the last runner passed the finish line, where observers cried out words of encouragement in Hebrew and English.

"Everyone was in really high spirits," Emily said.

When asked how long they'd trained for the 10-kilometer (6.2-mile) run, Hannah and Beatrice cheerfully responded, "No time!" though Emily had prepared with practice runs in the weeks before.

This was just one of many special events at AMHSI this semester, which has included visits to natural pools in the Galilee and a Jerusalem concert with singer Matisyahu, himself an alumnus who has characterized his period at AMHSI as "the first time in my life that I felt that being Jewish was something that was important and there was something to be discovered." Other alums include Sheryl Sandberg, Facebook’s chief operating officer, and Lauren Weisberger, author of "The Devil Wears Prada."

Founded in 1972, AMHSI is the first program of its kind that’s engineered to connect modern high school students to the land of Israel and the Jewish people through an intense interactive immersion formula.

AMHSI was reinvigorated in 2013 thanks to its partnership with Jewish National Fund. The partnership’s objectives are to promote Zionism among North American kids, and JNF has a merit-based Impact Fund that provides fellowships for students to attend AMSHI free each summer.

Spending time at AMHSI cements students' future relationship with Israel, Cohen added, while offering U.S. high school and college credits. "They come back [to America] as more mature individuals who are connected to Israel and to their Jewish identity," he said. "Statistically, they’re much more likely to participate in Jewish activities and organizations, and go on and become advocates of Israel on their college campus, and more active in their congregations. Basically, they discover themselves as a part of a Jewish nation."

Returning to school past midnight, sweaty and still buzzed from the run, Emily agreed. "You learn so much," she said, adding that she’d recommend a semester at AMHSI for any Jewish teen. “It’s definitely opened my eyes. It’s been a really life changing experience."
PLANT TREES IN ISRAEL