Why Connecticut license plates give me a surge of Jewish pride

I have no particular connection to Connecticut. I grew up in Rhode Island, and for the past 30 years have lived in the loveliest of all states, Vermont.

It's the colors of those Connecticut plates -- the unique blue and white -- that always, happily, remind me of Israel. And there’s another reason behind my fondness for the plates, something I realized only recently.

During my formative years, growing up in the 1950s, my Jewish self-image was complex.  Our family's life centered on our synagogue, Temple Beth El in Providence, and it was there, primarily, that I learned about being a Jew. The message was mixed. Much of my religious school education focused on marginal Jewish characters: stories of schlemiels and schlamazzels, the wise men of Chelm and a cartoon character named K'ton Ton. I read and reread the small chapter Fighters and Strong Men in "A Treasury of Jewish Folklore," my favorite book, but it only contained about five profiles, from biblical characters to a couple of stories from WWII.

Back then the Holocaust was a fresh wound, just beginning to reveal its true horrors. Israel was a toddler nation, not secure.  I wasn’t aware of direct anti-Semitism, but knew my parents couldn’t rent houses in certain neighborhoods or join certain clubs.

So one can imagine what a thrill it was when something extraordinary happened on a Saturday morning. I was 8 years old. When Brown University had a home football game, the teams would parade from the campus to the stadium, passing by the corner of our street. One day I came running home. "Guess what! Brown's playing a Jewish college!" I shouted. "They’ve got Jewish cheerleaders and Jewish coaches and a whole bunch of Jewish football players!”

"What’s the name of this 'Jewish college'?” my father asked.

To which I breathlessly, and so proudly, exclaimed, "Temple University!"

And there was something else back then that I now understand to be a critical boost to my Jewish self-image. Thinking, now, about my somewhat mysterious, lifelong fondness for those Connecticut license plates brought it into focus.

Those plates weren’t just blue and white. They were made of tin. 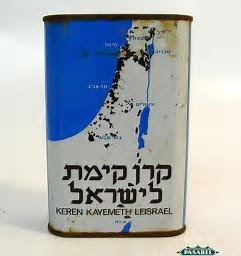 Blue and white. And tin. Just like the little Jewish National Fund tzedakah box that stood on my dresser.

A little kid in Providence, ambivalent about being a Jew, a recipient of mixed messages about his people’s accomplishments and victimhood -- for my childhood self, that JNF box was transforming.  With each clink of a coin dropped into that tin box on University Avenue, little Bobby Alper was helping build a Jewish nation, strong, tall and proud, tree by tree by tree.

Now, over six decades later, I become nostalgic when I see those Connecticut license plates. Surprisingly, they evoke an important part of my Jewish journey.

It makes me smile to recall how as an 8 year old I helped build an amazing nation.
That sweet little blue and white tin box, and the Jewish National Fund it represented, empowered me as a child to find my way as a Jew.

Bob Alper is a rabbi, author, and stand-up comic who performs across North America, Europe, and Israel. He is also a member of the JNF Speakers Bureau. Learn more here.
PLANT TREES IN ISRAEL