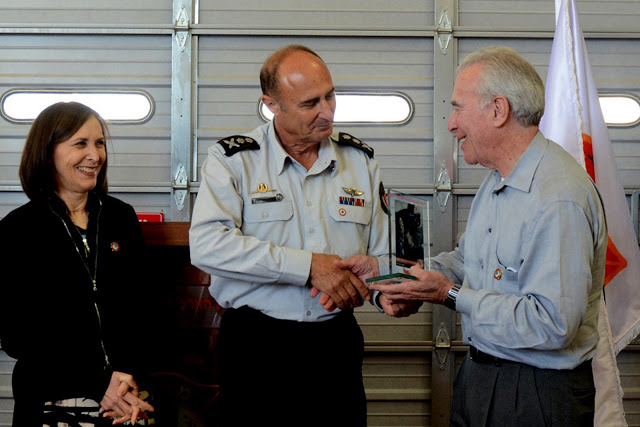 While JNF has a long history of helping Israel Fire & Rescue Services -- nearly a third of all Israeli fire trucks have been funded by JNF -- we'd never done an actual fire station until two years ago. The tragic Carmel fire in 2010 that claimed the lives of 44 Israelis revealed critical needs, and JNF came forward to help.

The day the fire broke out it was very windy.  Trucks from the closest fire station took 18 minutes to reach the fire, and by then it was raging out of control. Israel was caught unprepared for this, its worst fire to date at that time. Bibi Netanyahu took to the phones and secured firefighting aircraft from Russia, Jordan, Cypress, and Turkey, as well as Israel's many allies. Five thousand acres of trees were destroyed, but most tragically, 44 died, including a 16-year-old volunteer fire scout, Elad Riven, and Israel’s first female police chief, Ahuva Tomar of Haifa.

Had there been a fire station where the fire started, it likely would have been a routine fire call with little damage and no loss of life.


As president of the Miami-Dade region, I thought this was a compelling project to pursue.  I called Shachar Ayalon, commissioner of Israel Fire & Rescue Services, to see if this was something they really needed. He told me "yes!" -- in fact, the plans for the station had already been completed and half the funds allocated. But they couldn't go forward until they raised the other half. That’s where we came in. The total cost was $1,150,000, so our half was $575,000. I felt that was doable.

With very generous anchor commitments of $100,000 each from Ken and Nancie Segel and from the Robert Russell Foundation, we were well on the way. The Tampa region allocated the funds raised from its Tree of Life Dinner to the project.  Many other generous supporters contributed. Construction started and the station opened in February 2014.

My wife and I had the pleasure of visiting the fire station last year. We hosted a lunch for our Israeli cousins and invited Commissioner Ayalon and other fire officials. The kids got the chance to climb on the fire trucks and the young men climbed up the fire pole. We also met people from the Druze village of Usafiya, who are very grateful to have a fire station.

It gives me great pleasure to know that many JNF missions now include the Carmel Ridge Fire Station in their itineraries. And even greater pleasure to know that we've filled an important need. This was JNF's first and only fire station, but not for long. Thanks to the generosity of Steve and Penny Rosen, JNF has now built its second fire station, located in Mitzpe Ramon. Now we even have a Fire & Rescue Task Force, which will focus on continuing to fill the worthy needs of Israel Fire & Rescue Services.