Building Israel and battling terrorism, one tree at a time 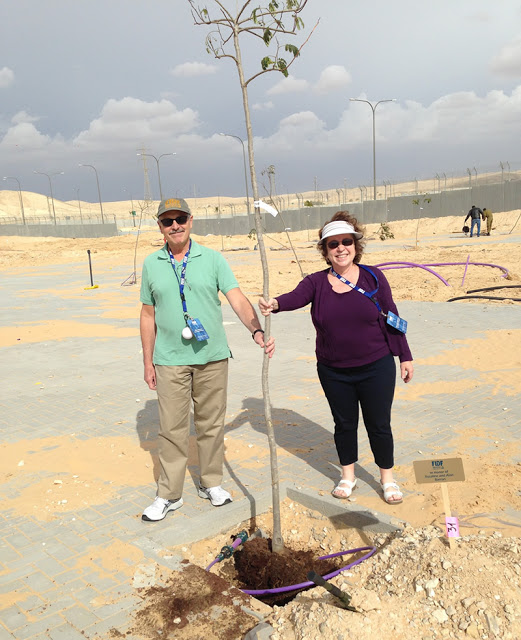 Alan and Rosaline Barron are kicking off their new JNF-sponsored mission right before the Jewish festival of Tu BiShvat, the "New Year for Trees." It's a time of renewal, and a celebration of nature and the environment. They are encouraging others to do the same. This article originally appeared here.
For years, Dr. Rosaline Barron woke up every day and asked herself the same question: “What have I done for Israel today?”
Now the recently retired gastroenterologist of Newton, Mass., has an answer -- and it's the same one every day. She's committed to planting a tree in Israel every day for the rest of her life through Jewish National Fund, continuing to help build the land of Israel.
"I can’t yet be there to live and work, but I can commit to Israel with the gift to JNF of planting one tree every day. It’s really a gift to myself,” she said. “By doing this small thing, my husband and I have participated in the ongoing journey to take care of building the land of Israel."
A child of Holocaust survivors, Barron remembers always having a Jewish National Fund Blue Box, or pushke, in the home that served as an inseparable link between Diaspora Jewry and the people of Israel. She and her husband, Alan, a retired internist, honeymooned in Israel and have returned many times, visiting the well-known sites, spending time with family, and yes, planting trees.
As physicians, they took the added step of giving whenever they would experience the tragic loss of a patient, honoring their patient’s memory by planting a tree in Israel. "It went a long way with the family who received the tree certificate knowing that their loved one will always live on in the holy land," Barron said.
A longtime volunteer for Jewish causes and Israel, she serves as vice chair of the New England Friends of the Israel Defense Forces and sits on the National Board of the FIDF. She and her husband have contributed for years to Israel by sponsoring FIDF scholarships and purchasing Israel Bonds. However, it was in 2015, when she attended a Jewish National Fund Breakfast for Israel that she became intrigued by the organization’s mission of building in the southern and northern parts of Israel, and by the many program areas to which donors could contribute.
Then came the JNF Town Hall this past summer.
Rosaline and Alan Barron were in the audience when JNF brought in three residents of Israeli communities on the border with Gaza for a two-week swing across the United States, telling the story of life under attack from terrorist kite fires and the ensuing havoc it was wreaking on the south.
“The event was moving and life-changing,” she said. “I decided to plant a tree every day of my life as my way to fight terrorism. They look to destroy and tear us down. I want to build us up. This simple act empowers me as a Jew to make a difference.”
And her timing couldn’t be better.
Barron is kicking off her new mission in life right before the Jewish festival of Tu BiShvat—the "New Year for Trees," a time of renewal, and a celebration of nature and the environment. She is encouraging others to do the same.
"Do yourselves a favor, and make a commitment that will help Israel bloom and prosper," she said. "Our pledge to plant one tree a day for the rest of our lives is not only special to us personally, but if you can join us, we can make a huge difference in the lives of Israelis. It will help develop the land, support farmers, and replenish burned and damaged farms and forests. This commitment enables us as Jews to help Israel every day in every way.”
To plant a tree in Israel, visit jnf.org/trees.
PLANT TREES IN ISRAEL