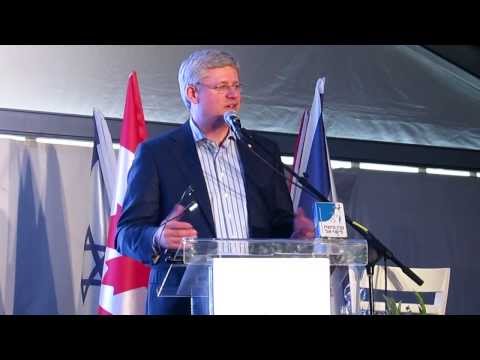 “Our environmental policy in Canada focuses on the preservation of green areas,” said the Prime Minister of Canada, Stephen Harper, at the ceremony, “so it is truly wonderful that we can share this with the State of Israel.”

The cornerstone ceremony for the Stephen J. Harper Visitors Center in the Hula Lake Park took place yesterday in the presence of the Prime Minister of Canada, who is currently visiting Israel. It was also attended by Canadian MPs, Israel Minister of International Relations Yuval Steinitz, KKL-JNF Chairman Efi Stenzler, KKL-JNF co-Chairman Efi Aflalo, CEO of JNF Canada Josh Cooper and a delegation of JNF Canada executives.
KKL-JNF Chairman Efi Stenzler described PM Harper of Canada as “one of the greatest friends of Israel in the world,” and said that “through the Visitors Center, we will disseminate the values we all believe in—education, science, the protection of nature, and the preservation of natural resources for future generations.” Turning directly to the Canadian PM, the KKL-JNF Chairman said, “This project is harmonious with your vision, because birds recognize no borders and symbolize the peace to which we all aspire.” The Visitors Center for Research and Education project is being executed with the support of Friends of KKL-JNF in Canada, assisted by contributions donated in honor of PM Harper at the Negev Dinner event, which took place in Toronto two months ago and was attended by 4,500 people. “Thank you for making this Visitors Center possible,” said PM Harper to the representatives from JNF Canada attending the ceremony. “I hope you will view this as part of your contribution to the State of Israel and to the connection between Canada and Israel.” Josh Cooper, CEO of JNF Canada, expressed his hope that the Visitors Center would make it possible to double the number of visitors at the site and reach one million visitors a year or even more. “This is an excellent opportunity for us not only to support Israel but also to share one of Israel’s most extraordinary sites with the whole world,” said Cooper. Plans for the Stephen Harper Visitors Center include an exhibition hall, an auditorium, classrooms, an observation deck with a view of the Hula Valley, and beautifully landscaped surroundings. The Hula Lake is one of the foremost bird watching sites in the world, with half a billion birds passing through it annually, primarily cranes, which make the site world famous. There are approximately 35,000 cranes wintering there at present.

Participating in the ceremony was PM Harper's entourage in Israel, including members of the Canadian Parliament, as well as a delegation of JNF Canada executives and, of course, executives of KKL-JNF in Israel including KKL-JNF Chairman Efi Stenzler, KKL-JNF co-Chairman Eli Aflalo, senior KKL-JNF directors and members of the KKL-JNF Executive Board. Israel Minister of International Relations Yuval Steinitzhonored the event with his presence as did local schoolchildren and even the junior ice hockey team of northern Israel. Heads of Regional Councils in the Galilee, who also took part in the cornerstone ceremony, stressed the great importance of the Hula Lake for tourism and economic development in northern Israel. After the speeches and the laying of the cornerstone, ceremony participants were taken on a tour of the site. Riding in a concealed coach drawn by a tractor, they were able to get very close to the cranes without disturbing them. The view was spectacular, with thousands of large, noisy birds soaring and gathering food in the fields. The tour included the Crane Scenic Lookout, a project which was carried out with the support of Friends of KKL-JNF in Canada, in Montreal, Mendy and Leona Eidinger. Other projects at the site were carried out with the support of Friends of KKL-JNF in Australia andSouth Africa. There is also research being done at the Hula Lake Park in conjunction with the Province of Manitoba, Canada.
PLANT TREES IN ISRAEL