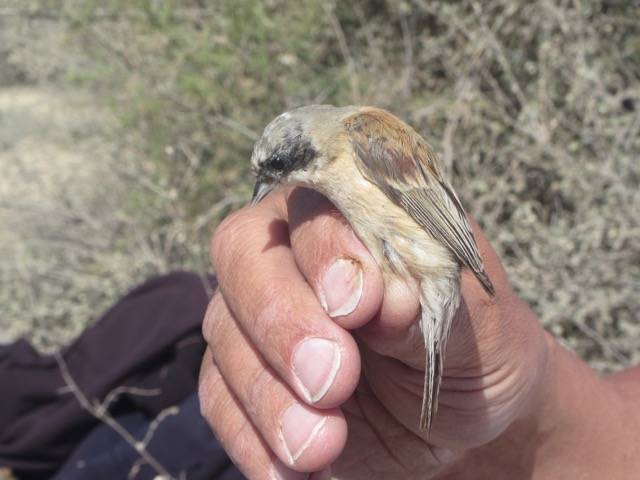 During last month's $1 Billion Roadmap mission to Israel, JNF's Yerucham Task Force got to sample how much fun it can be to actually play around town. First, we had rental bikes delivered to the new Desert Iris Hotel in the southern desert town. Then, our special guest partner, Ido Eisikovits from Green Horizons, tried to keep up as the task force, properly helmeted of course, rode downhill through town and into Yerucham Lake Park.
At the bottom of the hill, we were greeted by Yoram Zvik, manager of the Hoopoe, the Yerucham Center of Ornithology and Ecology, who runs a bird-banding and education program in the park. The Yerucham Lake, located in the middle of the park, is formed by a dam to capture seasonal runoff. Although its level fluctuates quite a bit during the year, there is always open water, making it easy to spot in the Negev as tens of thousands of birds pass over on their way between Africa and Europe. Yerucham is one of the best places in Israel to easily watch the parade.
Bird banding refers to the process of catching birds, identifying them with markers so their behavior can be studied, and then releasing them.Yoram took us offroad to his banding site by the lake.

There, the birds are gently caught in loose nets stretched across their flight lines, about 4 to 8 feet off the ground.Yoram and his expert staff carefully bag the birds, and bring them to the banding table, where they are examined, weighed, and banded.A very small and light metal band with a number is attached to one of their legs, and the band number, date, time, species and sex are recorded.Since this program has been in place for several years, birds that have already been banded are sometimes recaptured, their band identified and recorded.
And then came the magic.Yoram and his staff carefully handed the birds to us, one at a time, and after some instruction on how to hold a small bird (letting its head peek out between your fingers) we were told to slowly open our hands.
After a moment’s hesitation to get its bearing, each bird flew away into the nearby bushes, as expected. Unexpected was the moment of joy we experienced as the birds left our hands. No one could avoid smiling. Our part in the process was small, but maybe the most gratifying -- releasing a wild bird back to its habitat seemed a reaffirmation of the commitment we’ve all made to sustainable, minimally invasive development in the Negev in general, and it was a real treat to be letting the birds go near Yerucham in particular.
Related:
Surprises abound in Yerucham, a little town with big dreams
Bird watcher's Israel adventure brings soaring sights in sky, on ground
The current Yerucham Lake Park is the anchor for a new park that will extend from the current park, through an existing Wadi structure and approximately 3.5 miles to the spectacular Machtesh HaGadol, or Great Crater.The park will pass right through Yerucham, and will feature bike and walking paths, picnic areas, and places to sit and appreciate the desert views.JNF has provided support in the planning stages, and is supporting the current installation of water, sewage, and electric infrastructure throughout the park.The Yerucham Lake Park, along with over 1,000 new housing units, and enhanced public services, positions the town as the template for sustainable development in the Negev, a city in the heart of the park.
PLANT TREES IN ISRAEL