Dispatch from the front lines of the devastating Israel floods 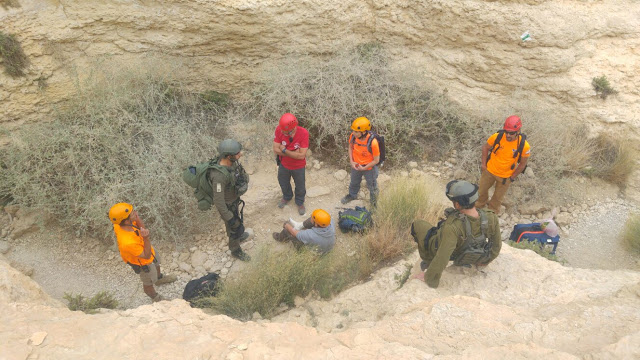 The Jewish National Fund Arava Task Force spent the past week in Israel, and their time there happened to coincide with the devastating storms in the area. Below Task Force chair Rebecca Fischer shares her impressions of being there during this trying time. To help with rescue efforts sorely needed in the area, please visit here.

I just returned from Israel. This was my 17th trip to Israel and I believe my 10th time in the Arava. This trip was unparalleled. We had an incredible time in the Hevel Eilot Region Sunday through Tuesday and the Central Arava Tuesday through Thursday, where we saw the fruits of our time and money literally rising from the desert.

We met as a Task Force to review the projects proposed to us by both regions on Wednesday afternoon at Nof Zuqim, and to decide which projects we want to recommend to Jewish National Fund for support. However, we soon found ourselves trapped in the dining hall as a result of the sand and rain storms brewing outside, the likes of which none of us had ever witnessed.

We now have a better understanding of what those in the Central Arava talk about when they describe the flash floods that hit the area following a downpour. Sadly, on Thursday, while the Task Force left early for the airport to avoid more expected bad weather, 11 lives were taken in the Dead Sea area as a result of the flash floods, 10 of them high school students caught in the torrent of flood waters while hiking with their pre-army group. The 11th body, a truck driver whose truck was swept away in the flood, was just recovered.

I stayed an additional four days after the Task Force left and was present for the storm's aftermath. It was the Central Arava Search and Rescue Team that pulled the children’s bodies from the water before the military or police were able to recover them. We were told over and over that now is the time to recognize the imperative of the Emergency Response Center and communication equipment for which we are raising money. These brave men who took the call to action and will never be the same after what they witnessed that day.

At week's end, members of the pre-army group in the Central Arava had invited my partner, Aaron Kula, and me to a Kabalat Shabbat (Shabbat prayer) in Paran. However, Noa Zer, director of the Central Arava Regional Council, called me Friday morning to let me know the teens wanted to grieve the loss of their friends alone.

Noa also advised me to be back in our room by 1:30 p.m. as the roads were closing in the Central Arava due to expected inclement weather. We rushed back from Arandal, ran to a market in Tsofar to get food, and went back to our room at Achvana to await the rain.

To say it was overwhelming would be an understatement. The electricity went out,  and our room flooded with water coming in through all the windows and under the door. We had Shabbat dinner by the light of our Shabbat candles, made Kiddush with wine from Rosh Hanikrah and ate cold cuts and a myriad of other cold foods.

When we blessed the candles that night and as we said our Shabbat prayers, we thanked G-d for guarding all those who were safe; for blessing us and all of Jewish National Fund; and for allowing us to be there at that moment to bear witness and communicate the importance of the work we are doing as members of this Task Force. I am always thankful to be in Israel. Never before have I felt so fortunate to be exactly where I was standing.

By Saturday, the electricity came back. We visited with Noa and her beautiful baby in Paran and headed down to Eilat to capture the sun and appreciate the beauty of the region. That night we metwith Mayor Eyal Blum and his beautiful wife, Dr. Niva Blum for dinner. Niva is doing vital research on ALS at the Arava R&D Center which is being funded in part by the generosity of one of our donors, the Asch Foundation, which had family members on our 2015 mission.

While eating, Eyal left the table and walked one table over due to some commotion, which was so quiet Aaron and I barely even noticed. He came back, and with a simple shrug and grin told us they were trying to capture a poisonous snake. It turned out to be a black python. Eyal, Niva, and the other residents' reactions was classic Central Arava -- no big deal. They live with sand storms, flash floods, snakes, and scorpions every day. Aaron and I looked at one another, decided to be Arava-ish, and followed the Blums outside where Aaron performed with a jam session going on with other residents.

I want to leave you with the simple thought that we are all responsible for one another and for our brothers and sisters in Israel. We need to finish the Emergency Response Center. We need to provide the search and rescue team with vital communication equipment. The cellular/internet system in the Central Arava is shockingly poor, and when people are in distress they often have no way of communicating with one another to find injured or lost people.

The Task Force also agreed to raise money for the Hevel Eilot Region to bring much needed art and culture to the residents to make their lives just a bit better and easier. Our region, the Arava, is the most remote in all of Israel. The people who live there live the most difficult of lives and yet, they are completely dedicated to staying there, populating the Negev and protecting the land for us and for all of Israel.  We must be there for them. Am Yisroel Chai.