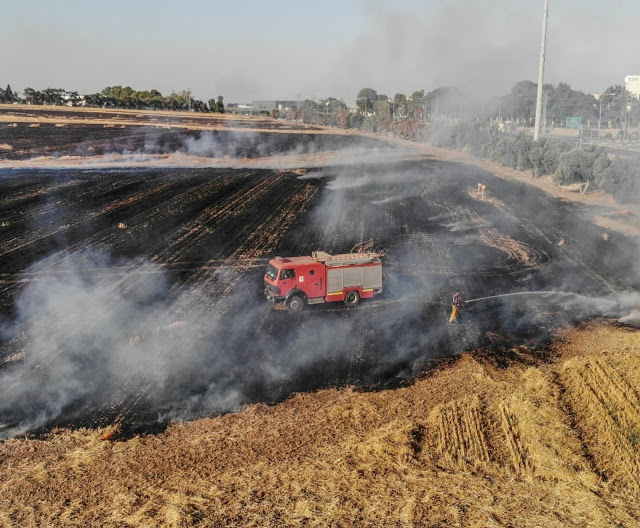 The families who call the Eshkol and Sha'ar Hanegev regions of Israel home have had an extremely traumatic few months.
Since March, over 450 flaming kites, balloons, and rockets have been launched at their communities from Gaza. These terrorist devices scorch thousands of acres of agricultural land and forests -- resources the communities rely on as their main source of economic development.
The fiery devices also spark emotional and physical damage, stoking fear and post-traumatic stress disorder in both adults and children forced to flee to shelters.
For kids of the region, a familiar and seemingly innocuous object, such as a kite, now has become a symbol of terror and fear. "This is the problem with PTSD," said Jehan Berman, a Belgian-born Israeli living in the community of Avshalom. "You can't outwardly see that these children are wounded too."

To combat the all-too-real threat of fire emanating from Gaza, Jewish National Fund is helping local communities purchase nine new fire wagons -- six for the Eshkol region and three for Sha'ar Ha’negev. The partnership between JNF and these regions gives new hope and energy to these resilient communities.
The fire wagons have become a critical asset to those on the front lines, as wagons can reach deeper into fields and into narrower spots that trucks simply can't access, while simultaneously harnessing a greater extinguishing power. The wagons are able to move extremely quickly, a vital component to stopping the fires. The sooner firefighters are able to get to the spot where an incendiary device hits the ground, of course, the less damage is caused.

How you can help communities in the Gaza Envelope

In addition to the wagons, Jewish National Fund has deployed professional firefighters to the area's kibbutzim. Residents have enthusiastically welcomed this much-needed assistance. While local kibbutzim have provided housing and meals for firefighters staying on site, JNF forestry personnel are also there to stop the spread of the damage. Volunteers from the kibbutzim themselves have joined the firefighting efforts, as well, and the IDF has provided off-road vehicles and additional reserve firefighters to bolster the efforts of the region. Across Israel, local firefighters have been heading south to assist where the need is greatest.

While these brave men and women work tirelessly to put out the fires, they become vulnerable to the additional risk of nearby rocket fire regularly shot from Gaza. With no bomb shelters nearby to run to, firefighters in the open fields must quickly fall to the ground, covering their heads, and then continue working to put out the fire once the siren warning is over.

"We are not working alone," said Yoram Levi, spokesperson for Israel Fire and Rescue, explaining the vital participation of those assessing and curbing the damage. "We are working with KKL-JNF forestry people and volunteers in the kibbutzim.  The army is giving us some reserve firefighters ... which has made significant improvement."

For years, the pioneers in the Negev have made their mark on Israeli history, literally making the desert bloom. However, the green efforts of their work have quickly turned to black.
"We didn't know what to ask for," said Michal Uziyahu, Jewish National Fund liaison for the Gaza Envelope.  "But I know that JNF is the exact thing our community needs. Lay leaders touch the ground here and support us and make us dream, think and strategize."