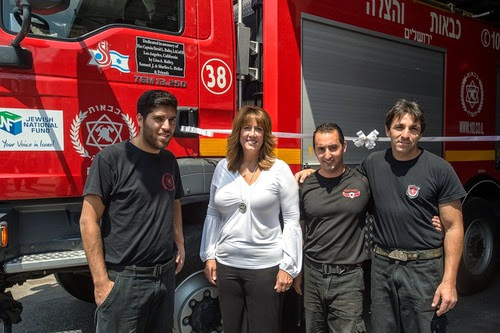 No. 38 is the newest fire truck in Jerusalem. Weighing in at 12 tons of red fiberglass and pulled by a 240-horsepower engine, it is capable of driving over steep hills, rocks, and ditches, and is perfectly suited for the terrain of Israel's capital city and its surrounding forests.
Last week, family and friends gathered at a fire station in Jerusalem's Givat Mordechai neighborhood to dedicate No. 38 in memory of fallen American firefighter Captain David L. Bailey from Los Angeles, California. Captain Bailey, who died in the line of duty in 2012, was known as a "fireman's fireman," and the truck, which will bear his name in perpetuity, testifies to the esteem in which he was held by those who knew and loved him.
"Dave was one of the most highly certified firefighters in the Los Angeles County Fire Department," said Sam Heller, Bailey's good friend and the force behind acquiring the fire truck for the Jerusalem fleet. "At his funeral, which was attended by over 2,000 firefighters, the fire chief who spoke asked all those assembled to rise. Then he listed multiple accreditations and one by one asked the firefighters to remain standing if they held that accreditation. After going through a long list of possible accreditations all fighters were seated, to which the Los Angeles County Fire Department Chief said, 'If Captain David L. Bailey was among us today, he would still be standing. That's the kind of professional firefighter Dave was.'"
Bailey, who joined the department in 1994 and made captain in 2009, was certified in Urban Search and Rescue, Swift Water Rescue, Homeland Security, and HAZMAT; was a HAZMAT certified instructor, recruit instructor, and Explorer Academy instructor; and was part of a FEMA team that deployed to Louisiana in the aftermath of Hurricane Katrina in 2005 and to Japan following the earthquake and tsunami there in 2011. He died at age 50 when he collapsed while leading wild-land fire training for prison-inmate firefighters.
Bailey's wife, Lisa, donated the truck together with Heller and his wife, Marlies, through Jewish National Fund (JNF) and Friends of Israel Firefighters with a matching donation from the Israeli government. The dedication took place in the presence of firemen from the Givat Mordechai station.
"The average fire truck in Israel is 15 to 20 years old and lumbers along at a speed of only about 50 kilometers (35 miles) per hour," said Yael Levontin, the Friends of Israel Firefighters liaison for JNF. "The trucks lack air conditioning and equipment that is essential for extinguishing fires such as modern hoses and nozzles, Nomex masks, and breathing apparatuses. The situation is even worse when dealing with forest fires since conditions there require that vehicles have superior traction and flexibility of response as well as a compact physical profile."
No. 38 is adapted to the needs of Israel's fire-fighting services and is particularly suitable for use in forests, thanks to its compact size, speed, and special equipment, according to Levontin.
In fact, it was a devastating fire on Mount Carmel in Israel's northern region that got Heller thinking about donating a fire truck in Bailey's memory. The deadliest forest fire in the country's history, in 2010, claimed 44 lives. More than 17,000 people had to be evacuated.
"I was aware of the Mount Carmel fire and when Dave died it just clicked with me," said Heller, who was born in Israel but immigrated to the US with his family when he was a young boy.
Said wife Lisa, "Neither Dave nor I had ever been to Israel, but this cause, in this city, would have been very meaningful to him. We're Christian, but Jerusalem is a holy city, no matter what religion you practice. This dedication would have made Dave very happy."
PLANT TREES IN ISRAEL