From a Kenyan village to Israel and back: One woman's big science plans 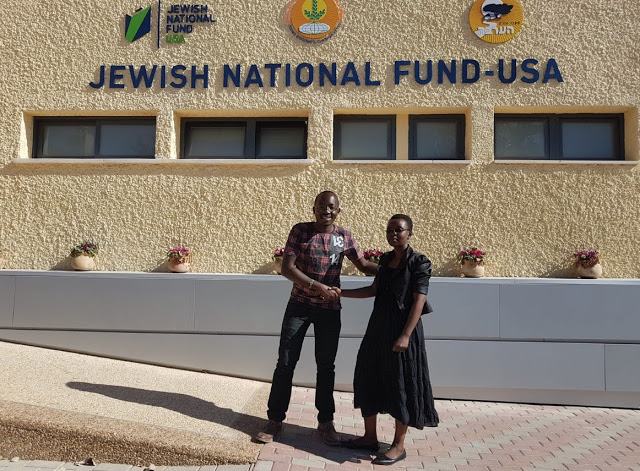 In Israel's south, at AICAT: The Arava International Center for Agricultural Training, students from around the world learn advanced agricultural practices they then take back to their home countries. Here's one student's inspiring story.

My story starts in a pastoralist community in Kenya's arid West Pokot County where food, water, and energy insecurity have prevailed for a long time.

Sometime in the year 2006, the primary school I attended benefited from a water project courtesy of UNICEF and Danish pump manufacturer Grundfos. A solar-powered borehole drilled at the school brought relief to my school and the entire village.

Nearby sat a water collection tank, which would then become the heart of the school. At this point, we became partially relieved of the routine daily six-mile "water-searching missions."

One day on a hot weekend afternoon, as I washed clothes at the school tank, I was startled by the sight of large amounts of water falling from above. To some people, this would be just a tank’s overflow, but I was definitely challenged to do something about the excess precious liquid that was simply wasting away.

The other thing I became suddenly aware of was the extent of greenery the falling water had created at the base of the water tower. The beauty of the grass inspired an idea. I thought to myself, "Well, how about a little vegetable farming? This water will do some good after all!"

Change in the community

Long story short: With the help and advice of a teacher and fellow students, we created a simple fenced-off garden at the site that would take advantage of any tank overflows. This mini project grew to a quarter acre that served our school with fresh produce. Bear in mind that we were still a nomadic pastoralist community. Change was certain!

A few months later, the initial water project's donors visited the school, and impressed, they extended their support of water resources.

Guess what? Things did not stop there, I was offered a special opportunity to attend the March 2007 World Science Forum in Lyon City, France.

This 4,000-delegate conference convened global experts to focus on the theme "water, agriculture/nutrition and health." The opportunity to represent the Eastern and Southern Africa region (ESARO) at the event was truly an honor. It is at this point I developed a new world view to engage in active community work.

Fast-forward to 2016 when I graduated from the Kenya Water Institute (KEWI) to join AICAT in 2018. My decision to apply to the AICAT program was inspired by what I'd heard about the Arava desert's accomplishments in agritech and water management.

Also, I was motivated by the success stories I heard about AICAT. Closer to home, the Kenarava Group (an agribusiness company formed by a team of AICAT graduates who are changing the face of farming in Kenya) was a great inspiration to me from the beginning.

In the Arava, I have practically learned how to "bloom the desert." Truthfully, my village back home is not really as dry as the Arava. With the achievements made by Arava’s farming families, I have realized that a lot can be done back home. Everything is possible.

I have also interacted with Israel from a unique perspective. Like most people who have not traveled to Israel, I had preconceived ideas about the country, concerning its security status and everything I read about the country in the media.

Today, I can attest that my perceptions have changed completely after a peaceful stay so far.

Back home, I intend to apply the knowledge and skills I acquired in the Arava to collaborate with youth and women's groups in driving social change. I will focus on food security and water management, which happen to be critical drivers of community life. Specifically, I will help introduce climate-smart solutions to advance the resilience of my home area for present and future generations.

Thanks AICAT. Thanks JNF.
PLANT TREES IN ISRAEL