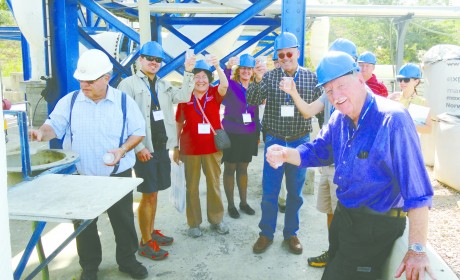 Sharon Megdal (third from left) toasts “L’Chaim”with desalinated seawater with her colleagues at a desalination plant in Hadera, Israel.

University of Arizona Distinguished Outreach Professor Sharon Megdal grew up in Irvington, N.J., where scarcity of water wasn’t a problem. After she settled in Tucson in the late 1970s, her perspective began to change. “I lived here a dozen years before becoming immersed in water,” says Megdal, who started out as a student of state and local government and holds a Ph.D. in economics from Princeton University.
In the mid-1980s, she served on the Arizona Corporation Commission, and in the early 1990s as executive director of the Santa Cruz Valley Water District, which no longer exists. She then worked as a consultant, including as an adviser on water resources for Pima County. In 2004, she became co-director of the UA Water Resources Research Center and a professor in the department of soil, water and environmental science.
“We live in a desert area where the focus on water is very important,” says Megdal. “I started reaching out to people interested in collaboration on water policy for personal and professional reasons on my second trip to Israel in 2006. My first trip to Israel was on a Jewish Federation of Southern Arizona mission in 1987.”

Following her 2006 trip, Megdal started having conversations with J. Edward Wright, director of the UA Center for Judaic Studies; Robert Verady, UA Udall Center deputy director; and others. “We hosted a workshop on the management of water policy in Arizona, Israel and the Palestinian territories in 2009,” she says. Megdal received grants from the National Science Foundation, U.S.-Israel Binational Science Foundation and the UA Foundation for that workshop.

For the past three years she’s gone to Israel twice a year to delve into water policy with Israelis and Palestinians. “I’ve gotten heavily into that collaboration,” says Megdal. Last month, Megdal organized a group of professionals from the Southwest to go on a working water management program in Israel. “Through seven days of site visits and interaction with top water experts, we learned about the region’s successes as well as challenges,” she wrote in her quarterly newsletter.

The November program had “the unique focus of professionals [working] on water issues intensively and extensively from a management and policy perspective, not technology or engineering,” notes Megdal. Among their visits, the group found out about the progress being made cleaning up the Yarkon River in Tel Aviv, where a deadly bridge collapse at the 1997 Maccabiah Games plunged athletes into polluted water, and also visited the Shafdan Wastewater Treatment Plant. “There are ways to develop solutions for issues that somehow seem insurmountable,” she says, adding that establishing personal contacts makes a difference. “I’ve built great friendships, professional associations over water policy.”

In addition, the Jewish National Fund-USA office in New York helped set up the professionals’ itinerary and “helped connect us to people I didn’t know,” says Megdal. JNF didn’t donate funds for the trip but designated it part of their Positively Israel Campaign, an initiative emphasizing Israeli progress.
Israel approaches its water issues in a centralized way, while “in the United States we handle water problems in a decentralized way,” notes Megdal, adding that pollution is a major problem in both countries. Aaron Citron at the Banias Falls near the headwaters of the Jordan River in northern Israel.

Aaron Citron, 30, a Tucson native now working as a policy analyst for the Environmental Defense Fund in Boulder, Colo., was one of the 10 professionals who “went to Israel to learn about how Israel is a leader in agricultural and municipal conservation. Israel reuses 80 percent to 90 percent of their water in agriculture,” he told the AJP.

Citron, who holds a J.D. degree from the UA James E. Rogers College of Law, previously worked for three years at the Arizona Land and Water Trust. Growing up, he attended Camp Charles Pearlstein in Prescott for eight years and at age 16 participated on a NFTY in Israel trip, which was organized by the camp. There was a focus on nature and outdoor activities, says Citron, adding that Judaism emphasizes “healing the world and caring for the environment. I believe that had an unconscious influence on me.”

Working on many issues related to the Colorado River — the water source for seven western states including Arizona — is a big part of Citron’s job. “We’re trying to develop conservation measures,” he says, noting a recent Colorado River Basin study that looks at supply and demand in the entire area. “As we use more water,” asks Citron, “what will we do about that in the next 50 years? Before we invest in huge projects we want to focus on local solutions through conservation measures.”

Meanwhile, Megdal notes that Israel’s Jordan River and the Colorado River are both “overallocated,” with reduced flows to the Dead Sea and Mexico’s delta, respectively. “Both areas are concerned with climate change,” she adds. “There are lots of similarities between the Jordan River and the ‘mighty’ Colorado. Both are very stressed river systems.”

“Shared Borders, Shared Waters: Israeli-Palestinian and Colorado River Basin Water Challenges,” edited by Megdal, Robert G. Varady and Susanna Eden, published this month by CRC Press, elaborates on some of what she has learned with her colleagues. But they must continue their efforts, she says.

“I would like to work on resolving trans-boundary water issues between the Palestinian territories and Israel,” says Megdal. “I’ve developed good relations with Palestinians in the West Bank. In many parts of Israel there are major problems with untreated sewage, despite being touted for reuse of its wastewater in agriculture. It’s to everybody’s advantage to fix this. This little part of the world has the wherewithal to fix it. They just have to work together,” she affirms.

“Water is a health and environmental issue that has to be resolved. Untreated waste and pollution don’t recognize political boundaries.”
PLANT TREES IN ISRAEL