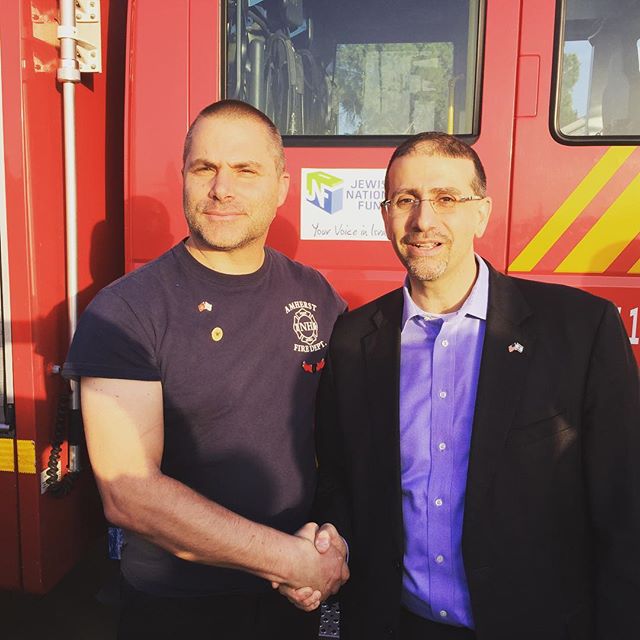 Adam Zlotnick is the crowning example of practicing what one preaches. Not only is the New Hampshire resident a member of the JNF New England board of directors, having been involved for over 10 years (his wife Christina is an active Sapphire member) but Adam is a proud participant of EVP- Emergency Volunteers Project.

What exactly is EVP? The Emergency Volunteers Project, started by Israeli Adi Zahavi, is a private group of U.S. firefighters who are a resource for Israeli command, the only such firefighter group in the country.

Recognizing a need, and realizing that whenever Israel goes through a crisis firefighters are severely understaffed, Zahavi thought to reach out to friends in the U.S. for help. If there's a big incident in Israel, Israeli agency leaders put their heads together and decide what resources are needed to take care of the problem. With the fires that raged this past November, Prime Minister Benjamin Netanyahu called up the Israeli Fire Command and asked them to get 40 EVPers over in 24 hours.

Adam has been a firefighter for the past 3.5 years. While he resides in Amherst, New Hampshire, with his family, and this is where he does his volunteer firefighting work, he works during the week in Massachusetts. When he's at home, he is on call five nights a week. It is pretty much a second full-time job. But don't call it a hobby -- Adam cringes when hearing this -- as he describes his firefighting work as a way of life. A love of his.

Adam came to EVP coincidentally through JNF. When Israel experienced its last forest fire, he reached out to his local JNF office and asked if he could volunteer with a fire station in Israel to run calls for a week or two. Sara Hefez, executive director of JNF New England, the Capital District and Boston, pointed Adam in the direction of EVP, and the rest is history.

Adam has been to Israel with EVP twice in the past five months (both times after getting a call in the morning, being told to get to the airport immediately, with tickets waiting for him), and each trip he is struck by Israeli firefighters' professionalism in the face of overwhelming circumstances.The fires were fierce, spreading quickly due to intense winds, but he says the firefighters were steadfast and proud of what they do.

Adam says that everyone he has encountered through EVP has a deep love for Israel -- most are Christians, but all volunteer out of a passion for the land, be it ties to religion, Zionism, or the desire to help those in need or be present for their firefighting brothers.

Israelis gain not only practical help but a philosophical boost, knowing they are being supported by friends from abroad who raise their spirits and give them extra energy. EVPers share knowledge with their Israeli counterparts, learning what they do, how they live, and how they respond to calls.

"I feel incredibly proud to have been there," Adam says. "To see the Israeli firefighters, their love for their job, their professionalism and lack of ego, and their desire just to help, its inspiring. Each day they move on, back to helping someone else. That is kind of the story of Israel -- we did it, let's move on."

He truly believes in the mission of EVP, and says it reminds him of JNF CEO Russell Robinson, seeing a need and taking action immediately to meet it.

"I was just doing what JNF does every day," Adam says, "which is fulfilling their duty to the land and people of Israel. I made a commitment to myself and others to do what I could to support Israel and that's what I did. If we don't act than nobody will."
PLANT TREES IN ISRAEL