Modern miracle #PoweredbyJNF: Suddenly, an escape from the deadly flames 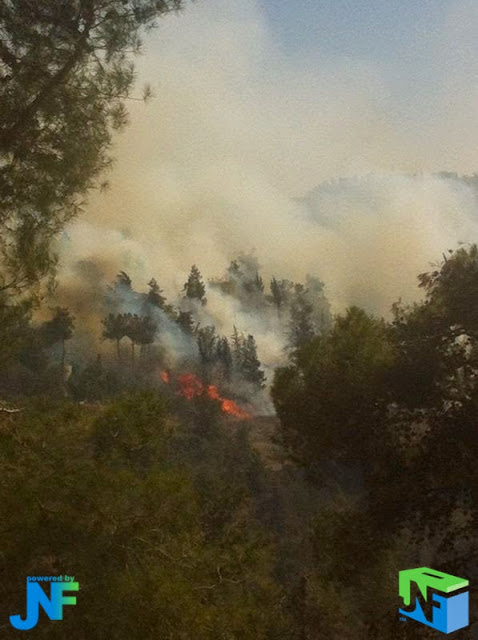 Israel's firefighters, some of the country's unsung heroes, are ranked among the best firefighting and rescue specialists in the world, and considered top experts in responding to acts of terror. But while they face situations specific to war, like in any community -- and particularly a dry, desert climate like that of Israel -- fires are a regular occurrence that need to be handled. Sometimes in moments of great peril battling the flames, firefighters experience something miraculous.

In July of this year, a number of fires encircled communities in the hills outside Jerusalem, including Ora, Aminadav, and Even Sapir. The Jerusalem Region Fire Brigade, which includes Jerusalem and Beit Shemesh firefighters, went into the fire with four crews, a total of 10 firefighters. They drove into the forest to protect Even Sapir first, in an attempt to stop the flames from engulfing homes. All of a sudden, the wind changed direction and the firefighters found themselves surrounded by flames. The heat trapped the first responders in their trucks. Just as they were about to be overcome by smoke, a path through the fire materialized, and the teams managed to escape their death trap.

"We felt it was a big miracle since the smoke really opened up for a matter of seconds," recalls firefighter Udi Gal. "We were able to get out, and literally right after the whole area was up in flames again."

Once the firefighters were clear from danger, they continued on their mission to fight the fires and save the communities from damage. And that's just what they did.

Fire departments in Israel are routinely underfunded as money is diverted to other urgent needs including national defense, and Israeli municipal and forest fire truck fleets are aging and inadequate. Contribute now to support the efforts of Israel's firefighters.
PLANT TREES IN ISRAEL