The Worst Storm in Decades 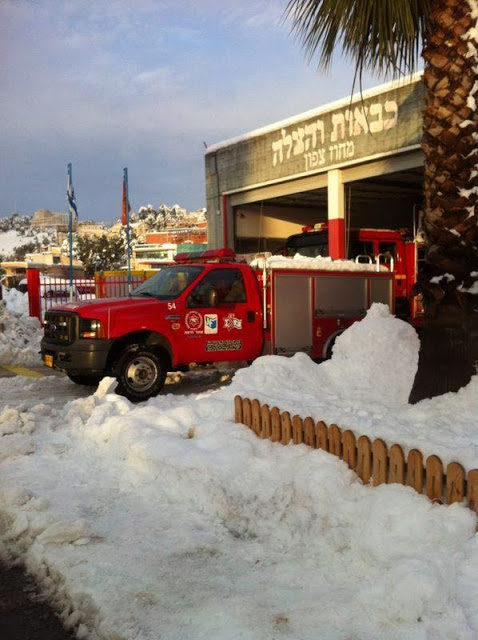 The snow, which started last week, reached 40-60 centimeters in Jerusalem and between 60 centimeters and one meter in the Golan. There were power outages in over twenty thousand households nationwide as of Saturday evening, including 8,000 in Jerusalem and its surroundings, and more than 1,000 in Safed. Some 80 villages around Jerusalem had been without power at the height of the storm, and some 30 were still disconnected on Saturday evening. At least three villages in the Golan Heights, which is better equipped to handle storms and snowfall, had been without electricity over the weekend, but were reconnected Saturday night. Haifa was hit with its first snowfall in 22 years, and Tel Aviv was battered by heavy rain and hail. Drivers stranded on Route 1 and Route 443 at the entrance to Jerusalem were being brought to emergency help centers established at the Jerusalem Convention Center, in Mevaseret Zion and at the Ofer military camp. Police said that by Friday morning they had assisted 1400 stranded motorists in the capital and in the highways leading to the city.
Jerusalem Mayor Nir Barkat said Saturday that his municipality was still working “in a state of emergency,” grappling with a “storm of extraordinary proportions.” Prime Minister Benjamin Netanyahu called it a “once-in-a-century” storm, and said efficient coordination had averted the kind of loss of life that other countries had suffered in similar circumstances. Route 1 into and out of Jerusalem was still closed late Saturday night, even to public transport, as the authorities struggled to clear lanes blocked by dozens of abandoned vehicles. 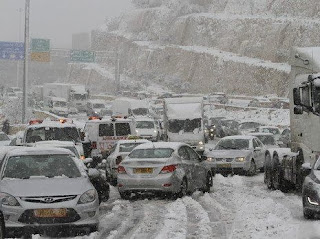 The Jerusalem fire fighters – sent us these statistics – from Thursday morning when the storm began they had: 5,000 calls to the fire station. They went on 2 calls due to floods, 37 gas leaks, 24 elevator rescues, 10 fires in homes, 10 rescue operations, 18 calls to assist people and 3 calls due to collapsed walls. Haifa firefighters joined their brothers in Safed where all of the roads are closed to help with the rescue operations.
And now for a great story -  Chaviva and Yosef Rosenbaum live in Har Nof in Jerusalem. Right before Shabbat Yosef’s grandparents, Bubby and Grandpa, decided to go from Rehavia (were their power went out) to spend the shabbos with their grandchildren in Har Nof. They got in a cab and at a certain point the cab driver said he wouldn’t go any farther and told them to get out… Grandpa and Bubby left the cab and stood on the sidewalk wondering what they would do, when all of a sudden a LARGE fire truck pulled up and the fire fighter asked them if he can help them – they told them they were trying to get to Har Nof and he said he had room for one of them in the fire truck… Bubby told him to take Grandpa since he can’t walk and that she would start walking towards the building. Chaviva and Yosef looked out of the window waiting for them to arrive when they see a fire truck pull up and Grandpa come out… Grandpa was trying to pay the fire fighter for the lift with the fire fighter saying "no no" and just like in a movie two seconds later Bubby comes driving up with another wonderful person who stopped for her.  These men and woman are just incredible and the work they do saves lives… 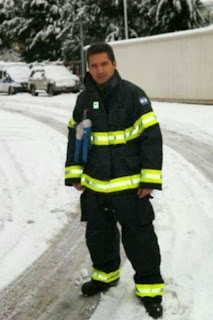 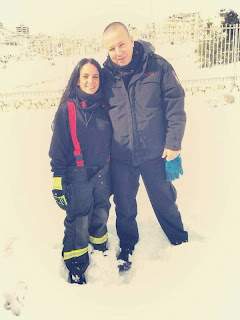