Tu BiShvat bash in Tel Aviv connects hundreds with their roots: 'I've never seen anything like it' 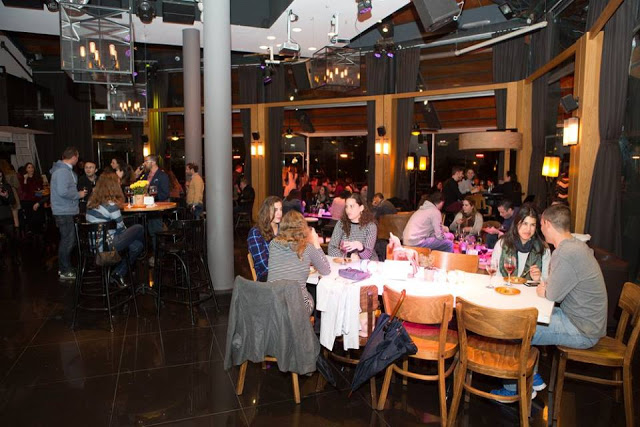 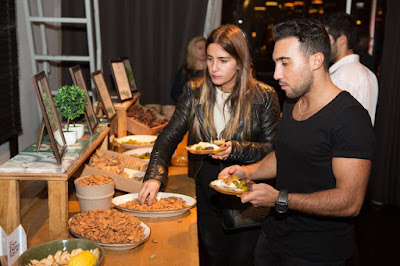 "I came all the way from Jerusalem to check out this scene,” said Ahuva Moses, a sociologist from New York City. "I've never seen anything like it."
Guests included students and new olim (immigrants), JNFuture members, and a rabbi to lead the event. Rabbi Shlomo Chayen, with a glass in one hand and an iPhone in the other, challenged the crowd to participate in a Jewish-themed trivia game. Winners received a bottle of wine from a Golan winery as participants learned blessings.
Eric Schorr, an oleh (immigrant) from Philadelphia, won "best Zionist."
“I love Israel because I was born to an American father and Israeli mother. I was raised and taught from an early age that Israel was a really special place for our people," he said. "I'm also the grandson of Holocaust survivors, so that also played a role in my belief that we need to always protect and defend Israel."
Schorr attributed his assimilation into Israeli society to the Am Yisrael Foundation, a partner of Jewish National Fund (JNF) that operates the JNFuture chapter in Israel. "The Am Yisrael Foundation has been the catalyst for me finding my sense of community, not only in Tel Aviv but in Israel as a whole. Without their programing, I don't think my klita(absorption) to Israel would have been that easy, let alone as meaningful." 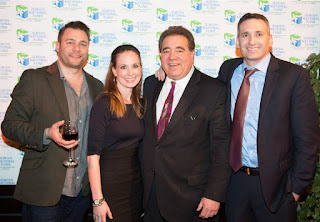 The founder of the Am Yisrael Foundation, Jay Shultz (at far left in photo at right,
with JNF's Yael Levontin, Russell F. Robinson and Eric Michaelson) smiled proudly as the room buzzed.

"There is a deep need for young Jews who make aliyah and those born in Israel to connect to their ability to subsequently invest in the future of the Jewish people, spiritually, physically, and emotionally.” Shultz added that "through the various projects of the Am Yisrael Foundation, and with partners like JNFuture Israel, we have the ability and honor of being part of the next thousand years of history. That's part of what we’re doing here tonight. Tu BiShvat is about the deep connection to the land."
For many Jews, Tu BiShvat celebrates the birthday of the trees, and for more than a century, JNF has planted trees in Israel. "People were scattered throughout the world and, not having the ability to email or text message, we literally sent letters inviting everyone to come together to repurchase the land of Israel for the Jewish people everywhere," JNF CEO Russell F.Robinson said at the event. "The borders of Israel were drawn by JNF in Vienna in 1901. Imagine if those people were unified in 1939. Imagine that 6 million people could have had a place to call home and not a place to go to their death."
Robinson also spoke of the importance of planting trees in what later became the State of Israel, and how JNF became known for its role in forestation. "Why is Israel the only country with pine forests? JNF was buying swamp lands that nobody would live in from anybody who would sell it. Trees were planted there for ownership and this historically links us to Tu BiShvat. We taught people to invest in the world, and we were the originators of Earth Day."
Adam Scott Bellos agreed. "Israel is the only country to enter the 21st century with more treesthan it had in the 20th century," he said. "There are universal values which we exude to the outside world and one of them is the importance of trees...and the preservation of nature. Tu BiShvat is kind of that day when Jews get together and hug a tree." 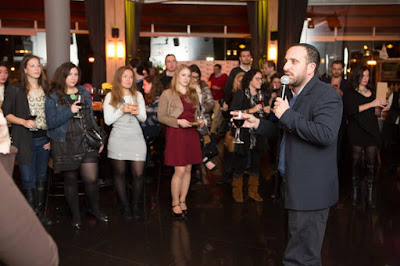 Tanya Greenberg thought the Tu BiShvat celebration was a great way to bring the Tel Aviv community together. "As an olah from South Africa living in Tel Aviv," she said, "it is incredibly special to see the constant growth of the community, and it was interesting to learn history with new friends.”

Rabbi Chayen (in photo right), made aliyah when he was only a toddler and praised the event for bringing new olim and Israelis together to learn about this important holiday. Chayen characterized the event as being made up of "tropical trees with different backgrounds and ways of thought. On this night, we deepened our understanding of the earth by creating a strong unity with our roots."
PLANT TREES IN ISRAEL