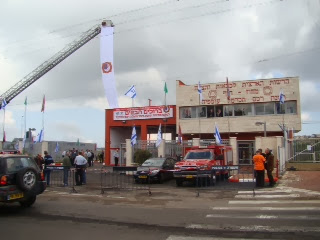 Tuesday was the opening ceremony of the brand new state-of-the-art fire station in Usafia that was made possible thanks to the Miami-Dade and Florida regions of Jewish National Fund under the leadership of Ron Kriss, the Miami president. In many ways, the occasion was like the end of one chapter and the beginning of a new one. The morning started with a visit to where it all began three and a half years ago. There was an emotional visit to the Carmel Forest Memorial where 44 people lost their lives in the worst fire ever in Israel’s history. The group then continued to the opening ceremony at the new station.
When commissioner Ayalon made his remarks, he recounted a phone call after the Carmel fire from Ron Kriss in Florida who was so moved and simply said -- "I want to help… tell me how." The commissioner told Ron about plans to build a fire station on Mount Carmel in the Druze village, a station that would lower response time to 4-6 minutes instead of the current 25 minutes, and a station that would help support the continued development of the North and would make a true difference in the lives of those in the region. "Ron and our JNF USA family got straight on it, and today was the result of all of the hard work that was put into raising the funds and building the station."

The ceremony was attended by the Israeli Minister of Internal Defense Yitzhak Aharonovich, the mayors of Usafia and Dalyat-El Carmel, the Israeli Fire and Rescue Commissioner, fire and rescue officers and our very own Makor mission. Bob Benedon represented Jewish National Fund and spoke beautifully about the work JNF does for the people and the land of Israel. He spoke about the JNF commitment to continue helping the Israeli fire fighters save lives and about all that we can achieve together.
We should all feel very proud of this wonderful accomplishment. This station is a true testament to the work Jewish National Fund does and how the results translate into the community. Thank you to all the donors who made this possible. 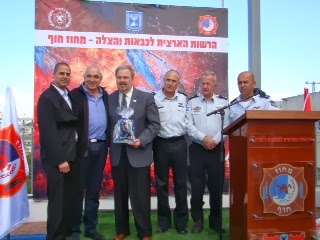 Alon Badihi, JNF/USA CEO in Israel and Bob Benadon, chairman of Makor being presented with an award by minister Aharonovich and Commissioner Ayalon.
PLANT TREES IN ISRAEL