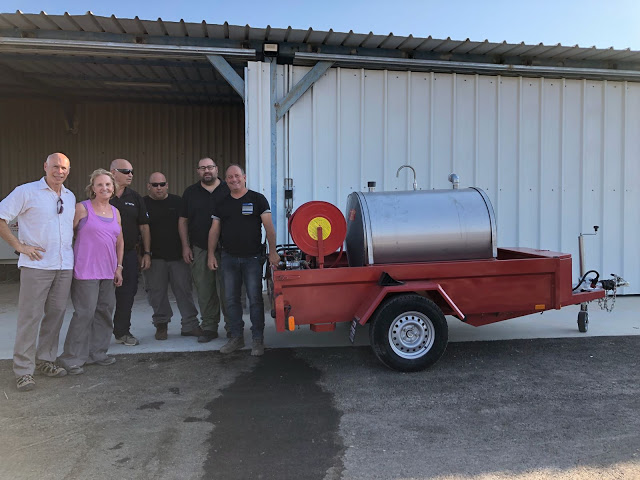 My wife, Aleta, and I were in Israel this summer and able to experience firsthand the tragic eco-terrorism being brought upon those living on the Gaza Envelope over the past few months. As members of the Jewish National Fund Gaza Envelope Task Force, we had visited the area many times and grew to know and care for many living on the border. With trepidation, we looked forward to visiting our friends to see for ourselves what had occurred.
Yedidya Harush, our guide and amazing JNF liaison from the Halutza communities, picked us up at at the Ofakim railroad station and took us to Gama, an area that had been consumed by fire. I was so saddened to see this and then I became angry. I asked myself how people could do such a horrible thing as to destroy wildlife and their natural habitats, forests that purify the air we need to breathe, and agricultural lands that provide food for a hungry world. The sheer cost just to replace what was burned is in the millions. Farmers lost so much -- land that was ready to yield crops and trees that took years to grow were gone, destroyed. 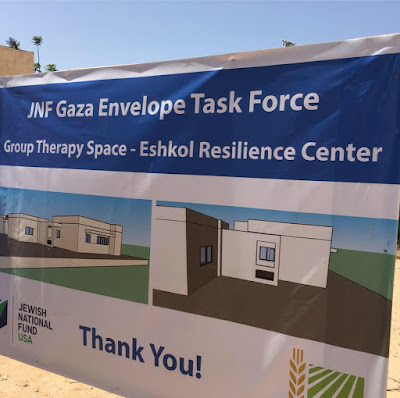 Later, we were met by Michal Uziyahu, longtime JNF advocate and Jewish National Fund Liaison for the Eshkol Regional Council. We toured the new resilience therapy center for the region. Michal is currently doing double duty, filling in for a director who coordinates during school emergencies in the Eshkol Regional Council. We were there to see the nearly completed wing of the therapeutic resilience center our force raised funds to construct.

I had mixed emotions touring the building. On the one hand, the new structure will be used regularly to treat the far too many children and families who suffer from PTSD, and we could see the funds we had raised were well spent. On the other hand, the sad reality hit home that the community even needs a therapeutic resiliency center at all. I would have preferred to see a new recreational center or an entertainment facility, but alas, the need for a therapeutic resiliency center is sadly paramount.

Next, we participated in the inauguration for the delivery of the first of nine fire wagons JNF-USA ordered for the region. We met with Keith Isaacson, the civilian security officer for the Eshkol Regional Council. We arrived just in time to do a test of the system and gave it a big thumbs-up.

The fire wagon has a main 75-foot hose and an extension hose. It also has a secondary hose that can be operated in conjunction with the primary hose, so two firefighters can operate at the same time. The tank holds 75 gallons of water. It's powered by a diesel engine, which generates a lot of pressure. The nozzle can spray through different apertures, creating very broad to very narrow flows. It can operate on one tank for 20 to 30 minutes of use, depending on the flow selected. These fire wagons are critical for this region as they can be operational in an emergency far faster than the larger fire trucks.
In Sderot, Yedidya and I leaned a 10-foot ladder against a wall and climbed up through a narrow hatch to reach the roof of a four-story building. We witnessed firsthand the damage of a direct hit by a rocket on the roof. Miraculously, no occupants were injured because the rocket landed atop a concrete safety room. If it had landed one foot away, it would have hit an unsecured roof section and one can only guess what injuries might have occurred.

The people of this region are our national heroes. They have been bombarded with hundreds of rockets and assaulted with over a thousand terror balloons, kites, and condoms causing destruction to over 7,000 acres of lush green farmland and forests. Even a falcon was sent into Israel from Gaza by Hamas with an incendiary device attached. A bird! Can you imagine?

At least four people have been physically injured and thousands have been traumatized. They’ve had to run to bomb shelters or similar protected rooms to sleep in a safe environment. With all these calamities they refuse to leave their homes and state that they are strong and will respond by planting more, because they are here to stay. These are their homes and this is their country.
Our Gaza Envelope Task Force visits the region frequently to lend moral support.  We’ve provided needed funds to construct the traumatic resilience center in the Eshkol Regional Council area, an animal-assisted therapy center in the city of Sderot, and a new, re-reinforced recreational center for children attending middle school and high school in the Eshkol Regional Council area.

Funds have also been provided to purchase firefighting wagons. We've also taken on a project working with local artists to paint the exterior of existing bomb shelters. The children currently are facing so much trauma that the shelters, as they stood, gray and cold, did not provide a feeling of comfort. The children are working with local artists to paint beautiful murals on the outside if the shelters making them feel more welcoming. We are turning the challenges of living in the area into positive statements.

Sadly, at the time I wrote this, Israelis were running for cover once again. Hamas terrorists had been bombarding Southern Israel with rocket attacks for hours, and they were still firing. Two homes in Sderot had been hit. The Jewish National Fund outdoor playground in Sderot was playing host that afternoon to 200 kids. Innocent, happy children playing in a playground, when Hamas started bombing. The playground took a direct hit. Miraculously, no one was injured. Aleta and I are convinced now, more than ever, that we must do all we can to help make life better for those brave 21st-century pioneers living on Israel's periphery. Sadly, those resilience centers are needed now, more than ever.

I ask everyone to join me and Aleta at one of the 11 JNF emergency Gaza town hall meetings that will be held around the country beginning Aug. 19 in Los Angeles. I'm honored to be the chairperson for the town hall meeting in NYC Thursday, Aug. 30. Come hear for yourself from three people living on the Gaza Envelope. Learn what is really going on because the media is silent. Please don't be silent.
PLANT TREES IN ISRAEL