A Rosh Hashanah Postcard from the Past 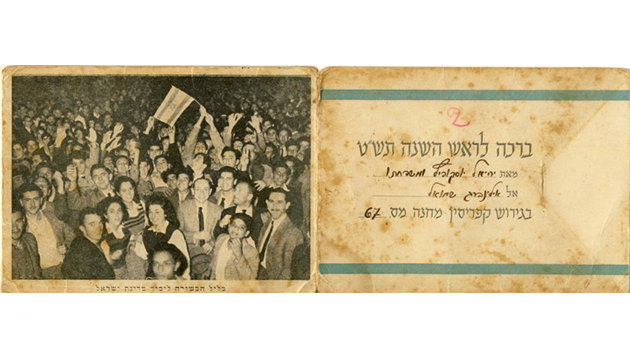 Shmuel Elenberg was born in Poland and belonged to the youth movement, Habonim Dror. After the horrors of the Holocaust, he tried to make his way to Mandate Palestine with other clandestine immigrant (ma’apilim) but their ship was captured by the British. Elenberg was sent to Camp 67 in Dhekelia, one of the many detention camps set up by the British to house the ma’apilim. In May, 1948, David Ben Gurion declared an independent Jewish state, and opened its gates to all Jews around the world, including those interned in Cyprus detention camps. However, it took until February 1949 until the last group of detainees left for the new State of Israel.

We know from this greeting card sent to Elenberg by friends or relatives in Israel that he was still in Camp 67 over Rosh Hashana in September 1948. This means that he must have been one of the last of the ma’apilim to finally reach the shores of Eretz Yisrael.

The postcard also depicts a photograph of jubilant crowds celebrating the declaration of independence.

This Rosh Hashana card, which teaches us so much about the dramatic years around Independence and the stories of the people who lived through this era, can be found in the Atlit Archives at the Atlit Detention Camp.  Visit the camp to find out about the daily lives of the thousands of clandestine immigrants – many of them Holocaust survivors - who were interned here.

There are exciting plans underway to expand Atlit, including state-of-the art exhibits to tell these fascinating and heroic stories of clandestine immigration. Jewish National Fund-USA is committed to preserving Israel's heritage sites to ensure that future generations know the foundations of the miraculous nation that is Israel.

To make a gift in support of Atlit and heritage site preservation, click here: https://www.jnf.org/menu-2/our-work/heritage-site-preservation