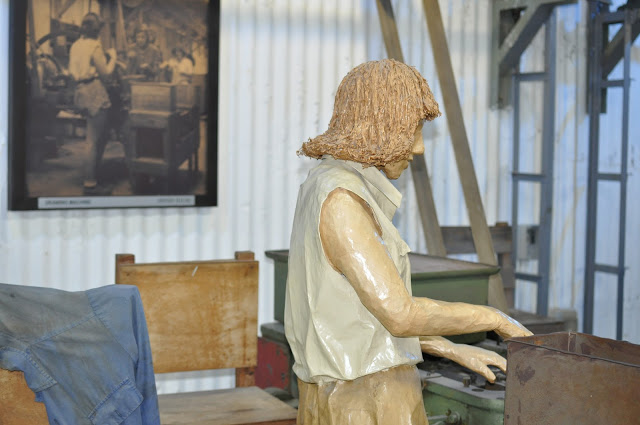 Usually you learn about history from books or see it unfold on the big screen. Occasionally, if you're very, very lucky, you meet history in person.
That's what happened last Thursday, when my travel companions in Israel and I met Shlomo Hillel, a 92-year-old Iraqi-born Israeli who played a remarkable and dramatic role in the establishment of Israel.
Hillel was among the young Hebrew scouts who worked at a clandestine underground Haganah munitions factory from 1945-1948. To do so, they climbed through a narrow hole in the ground, down a steep spiral staircase, to spend 10-hour days in a hot, air-choked machine shop shaping metal into bullets to be used in the fight for Jewish independence. The 45 factory workers produced more than 2 million 9-millimeter machine gun bullets overall, ammunition considered key to the early fight for statehood.
It seemed fitting that our group of digital-media professionals should end our tour talking to Hillel. We traveled from south to north meeting Israelis touched by the JNF -- everyone from Jewish families evacuated from Gaza during Israel's disengagement from the territory and now creating flourishing new communities in the Negev desert to Jewish, Muslim, and Christianentrepreneurs in the Western Galilee and soldiers with special needs serving in the Israel Defense Forces. But without the determination of people like Hillel, none of them would have the Israel we know today to call home.
Hillel doesn't see himself as a hero, but from the time the Haganah asked his youth group to consider taking on a treacherous top-secret mission -- the details of which they would learn only after they had unanimously agreed -- he faced great danger daily. Danger of injury from machines or explosive materials. Danger of being caught by the British and possibly put to death for his illegal activities.
Even the smallest secret can be hard to keep, but the young munitions makers had to guard a monumental one for years, even from parents, siblings, and other members of the Ayalon Institute, the training site for kibbutz life near Rehovot where the underground plant was located.
Sometimes the workers had to deliberately reject loved ones, not letting them visit Ayalon or cutting their visits short to return to business in their subterranean chamber.
Still, "even our families understood that they should not ask too many questions because they realized that when they are asking questions they are getting silly answers," Hillel recalled. "In those days, they knew we had the British here and we had to keep things secret... We were not miserable. We were proud. We were very proud of what we were doing."
Hillel participated in other risky secret missions at the time as well, volunteering for the underground Haganah operation to smuggle Jews from Arab countries to Mandatory Palestine. He was assigned to return to his home country of Iraq, where the Jewish minority faced increasingly hostile conditions, and helped 125,000 Iraqi Jews escape between 1947 and 1952. (Hillel chronicles that experience in his memoir, "Operation Babylon.")
That the underground factory at the Ayalon Institute went undiscovered by the British is just one astounding success of the mission. Another is that the workers managed to avoid accidents and injury – save for one machine operator who cut off the tip of his finger (while distracted by a pretty female factory worker a few feet away, the story goes). He returned to work in the factory shortly thereafter.
A grandfather of three with gentle eyes and expressive hands that punctuate every word, Hillel – who later served as Knesset speaker and deputy director of the Ministry of Foreign Affairs -- told us his story at the Ayalon Institute Museum, one of the historical places run by the JNF-supported Society for Preservation of Israel Heritage Sites. There, tour guides take visitors through a reconstructed version of the factory while relaying a story with so many twists it's hard to believe it wasn't ripped from the pages of a spy novel. Sometimes visitors book tours up to a year in advance.
With a story this unlikely and this fascinating, it's no wonder the historical site has become such a popular destination. The ingenuity required to build and maintain the factory right under the noses of the unsuspecting British is nothing short of astonishing.

An entire site training people for kibbutz life was built as a ruse to cover up the existence of the facility. An extra-loud movable washing machine in the laundry room above the factory entrance disguised the sounds of the bullet-making machines below. To justify keeping the washer operating so often, the kibbutz established a pickup-and-delivery laundry service for people in town, including British soldiers stationed nearby. To keep the underground workers from becoming suspiciously pale from lack of sunlight, a sun lamp was brought in to the secret workshop -- the world's first tanning salon, our tour guide Yarden joked.
And on and on it goes. No potential obstacle to the labyrinthian scheme went unconsidered.
The tale of the Ayalon Institute, now being made into a documentary, represents one of the more spectacular stories of Israeli resolve in the country's history, but so many unfold there every day. Stories of people who put themselves in jeopardy to protect their fellow citizens. Stories of people who make it their mission to ensure the most vulnerable members of Israeli society live lives of dignity. Stories of the impossible made possible through brainpower, a can-and-will-do attitude, and sheer force of will.
Stories of people like Shlomo Hillel.
PLANT TREES IN ISRAEL