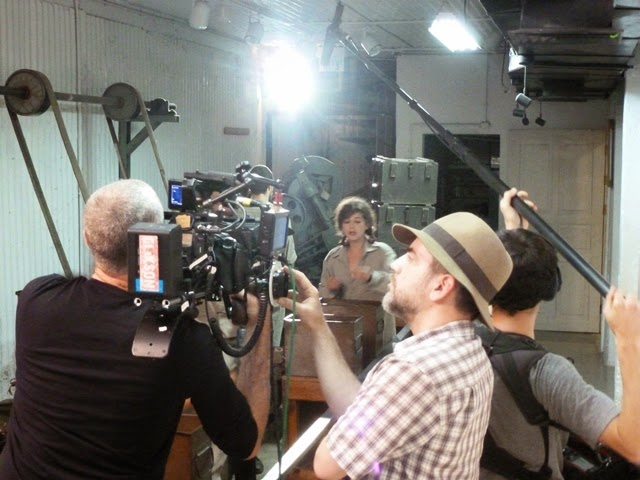 One of the most dramatic chapters in the struggle to establish the state of Israel will soon be portrayed in a documentary, thanks to an American news reporter turned movie producer who recently filmed at the site where the story of a clandestine bullet factory unfolded 70 years ago.

Laurel Fairworth, an Emmy-Award-winning television journalist based in Philadelphia, was inspired to re-create for posterity this little-known story of secrecy and heroism after visiting Israel for the first time two years ago.

"My parents loved Israel, and before my mother passed away she made me promise to visit. Frankly, I had no desire to do so, but to fulfill my promise I went on a mega-mission with our Jewish Federation. Very simply, I was smitten," Fairworth said at the Ayalon Institute on the day filming for the documentary "The Secret Beneath the Hill" began there in March. "Ayalon Institute" was the code name for the clandestine underground munitions plant that today is a national museum.

"The mission took us to the usual places, but also to a place nicknamed the Bullet Factory. It didn't sound interesting, but then we came here and I heard the story of these young, heroic, modest people, some of them orphans from the Holocaust. I was mesmerized," Fairworth said.

The story of the Ayalon Institute began in 1933 when a facility to train groups for kibbutz life opened outside the city of Rehovot in an area that was then isolated but today is urban.

"In 1945, it became clear to then-Prime Minister David Ben-Gurion that the bloody encounters with British rule were becoming more severe and that a war with the Arabs was looming," said Noa Gefen, executive vice chair for the Society for Preservation of Israel Heritage Sites (SPIHS). The Ayalon Institute and SPIHS are partners of the Jewish National Fund, which helps support and preserve important historical sites throughout Israel, along with many other programs.

“The Haganah, a Jewish paramilitary organization organized in the 1920s that later merged into the Israel Defense Forces in 1948, was tasked with preparing for the war and readying the necessary arms. Huge quantities of weapons were manufactured in several secret plants, but the big challenge was making ammunition -- specifically, 9-millimeter bullets,” Gefen explained.

The Haganah decided to set up a secret munitions plant at the kibbutz training facility and approached an incoming group to postpone their dream of starting a kibbutz to take on the work of building an underground factory and producing bullets. Perhaps most importantly, the group of 45 teenagers and young adults would be responsible for maintaining absolute secrecy, or else face certain death at the hands of the British, who had a military base within walking distance of the training facility.

The group agreed and built a plant the size of a tennis court 24 feet below ground. To camouflage the sounds of noisy machinery, and to hide one of two secret entrances, they constructed an operating laundry facility above ground at one end of the location. To disguise the factory smells and hide the second secret entrance, they built a working bakery at the other end.

“The factory functioned under the noses of the British for three years while the group manufactured more than 2 million bullets," Gefen said. "There are stories like this all over Israel, but the creativity with which this group succeeded, and the way they kept the secret -- from the British, the others at the facility, even their own family members -- makes this unique.” What makes it even more clandestine is that all those who took part in the operation kept it secret for 30 additional years until the camp, by then long abandoned, was reclaimed as a national heritage site and the story was revealed.


“When I heard the story, I thought, wow, before these people are gone the world needs to know about what they did," Fairworth said. "I was amazed by the story and when I got back to the States I raised some money and put in some of my own." Fairworth was able to capture on tape two members of the group who spoke English. Sadly, one of them, Yehudit Ayalon, a prominent group member and museum spokesperson, recently passed away. Fairworth is now looking for additional funding to complete the project.

The film, a docudrama created in partnership with Jewish National Fund, will re-create scenes from the story that take place both above and below ground, with actors in period costume. Fairworth has already lined up a publicity firm in Los Angeles to promote the film and a company in New York to distribute it. When the project is complete, the film will be entered in international film festivals to garner even more attention.

“We want to take it to festivals so more people will learn about this," Fairworth said. "We also want to do a companion educational piece and bring the film to universities, synagogues, and mixed religious groups. A shortened version will be provided to the museum and to the State of Israel,"

"There are a lot of stories out there about the Holocaust, and we hear a lot about Israel’s modern-day history, but there’s not much out there about the pre-state and the War of Independence era," the filmmaker added. "Soon, with the passing of those who helped make history, these stories will leave us forever. Unless we capture them now, it will be too late."