Grainy photo at Jerusalem historic site stirs tears: 'This is who we are' 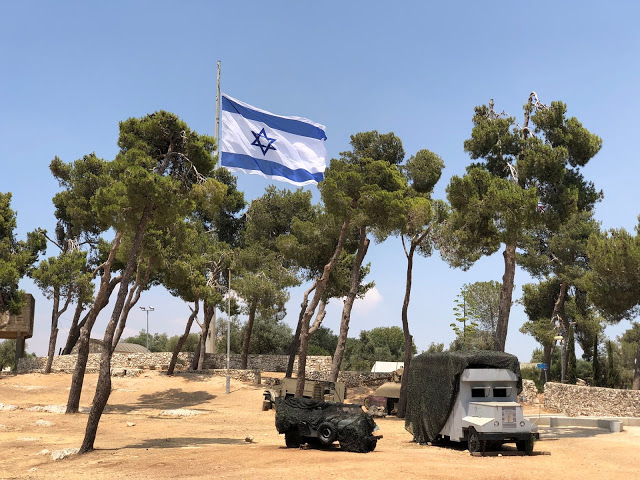 My personal connection to Israel runs deep. My mom and grandmother are Israeli. My grandfather was born in Germany and fled to British Mandate Palestine in the early 1930s to escape the rising Nazi regime. My entire life, I've been steeped in the stories, music, and culture of Israel. I'd been to Israel before, of course, and I consider myself very familiar with Jewish National Fund’s work, so I thought I knew what to expect from this summer's Jewish Leadership Institute Mission: an action-packed week traveling around the country to see JNF affiliates and projects firsthand. The truth is I had no idea how powerful the experience would be.

The first stop on our first day was Ammunition Hill (Givat HaTachmoshet), the site of the historic battle for the reunification of Jerusalem during the Six Day War in 1967. Thanks to support from JNF and in partnership with the Society of Israel Heritage Sites (SPIHS), Municipality of Jerusalem, and the Government of Israel, the site now features reconstructed trenches and a museum with interactive exhibits. On our way there I thought, The site of an historic battle, neat.
As I soon learned, Ammunition Hill is so much more than the site of an historic battle. It is an important chapter in the modern history of the Jewish people.
The museum's walls are covered with photographs depicting life in divided Jerusalem and stories of heroism and sacrifice during the campaign to reunite the city. One particular photograph caught my eye -- it was a grainy picture of a sign, erected by soldiers in Israel's Paratroop Brigade after the battle at Ammunition Hill, with these words:
Army of Israel
BURIED HERE ARE
17 BRAVE JORDANIAN
SOLDIERS. JUNE 7, 1967
As "Jerusalem of Gold," a song I still hear in my grandmother’s voice, played in the background, I stood staring at the photograph with tears in my eyes and thought, Who else would do this? What other army -- what other people -- would erect a memorial to honor battlefield enemies, especially on the heels of a battle in which they suffered their own significant loss of life?
Then I thought, This is who we are. These are Jewish values.
Ammunition Hill isn't just the scene of an historic battle and it isn’t just a museum. It tells the story of the values of those who came before us and the price they paid for freedom and independence, and it reminds us of our shared responsibility to fulfill the legacy they left behind.
Throughout our trip, people constantly reminded us of the old adage that you have to know where you’ve been to know where you’re going. Based on my experience at Ammunition Hill, I believe visiting these historically significant places is one of the best ways to understand where we've been as a people. Thanks to JNF and SPIHS, more than 150 heritage sites around Israel, including Ammunition Hill, are now open to visitors.

By preserving and restoring Israel's heritage sites, we ensure the symbols of our shared history inspire and motivate today’s generation and generations to come. I'm so proud to be a part of this important work.
PLANT TREES IN ISRAEL