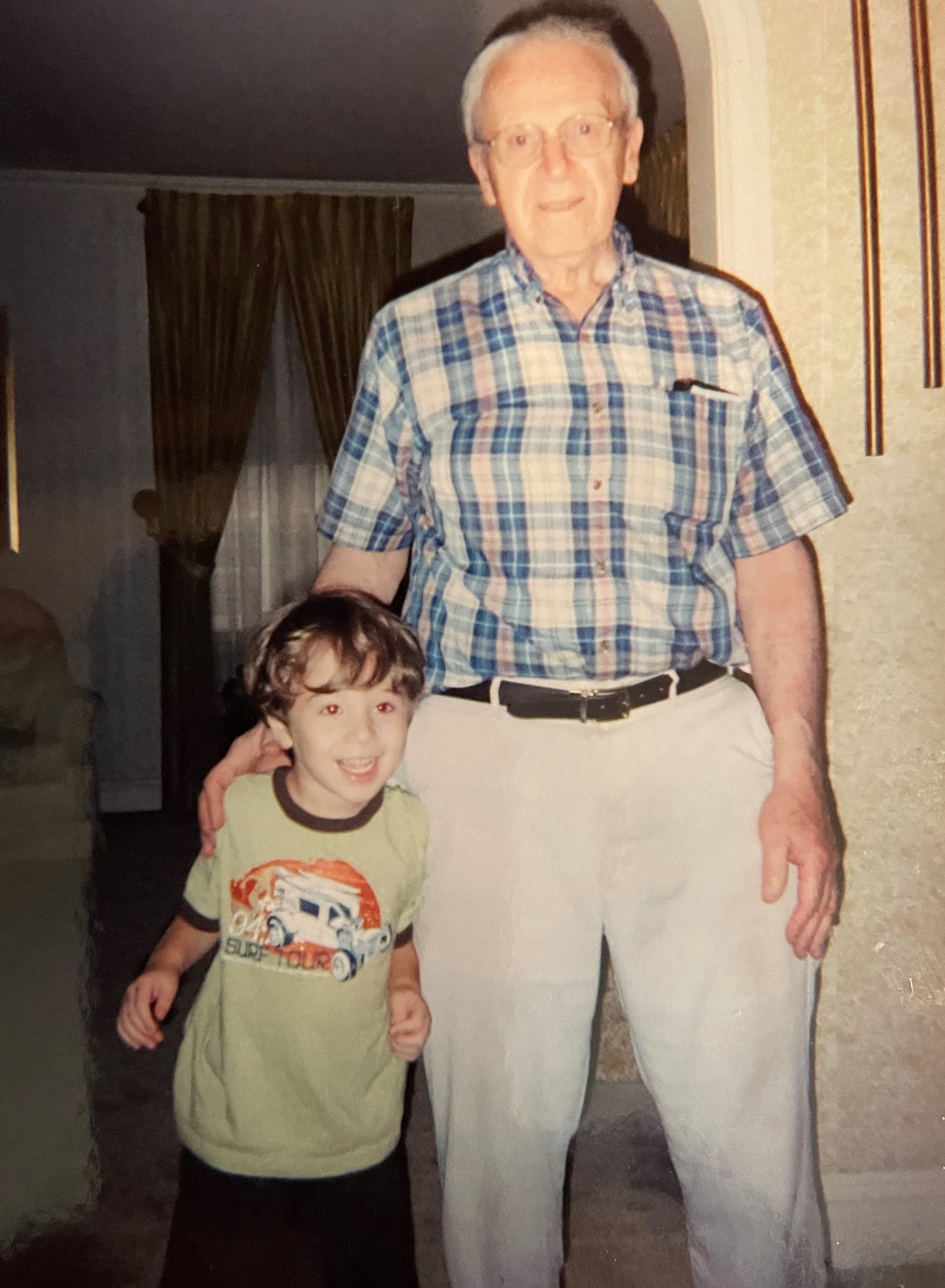 My father Barnett Lonstein (1923-2012), was a first-generation Jewish American, his parents having emigrated from Lithuania between 1910 and 1911. He was born and raised in Worcester, Mass., during the Depression, facing the hardships many others of his generation experienced. He was only able to attend junior high and high school Monday through Thursday, having to stay up all night Thursday and Friday morning to help out at his father’s chicken store, plucking and preparing fresh chickens to be ready for pickup Friday by the local Jewish community for their Sabbath meal. 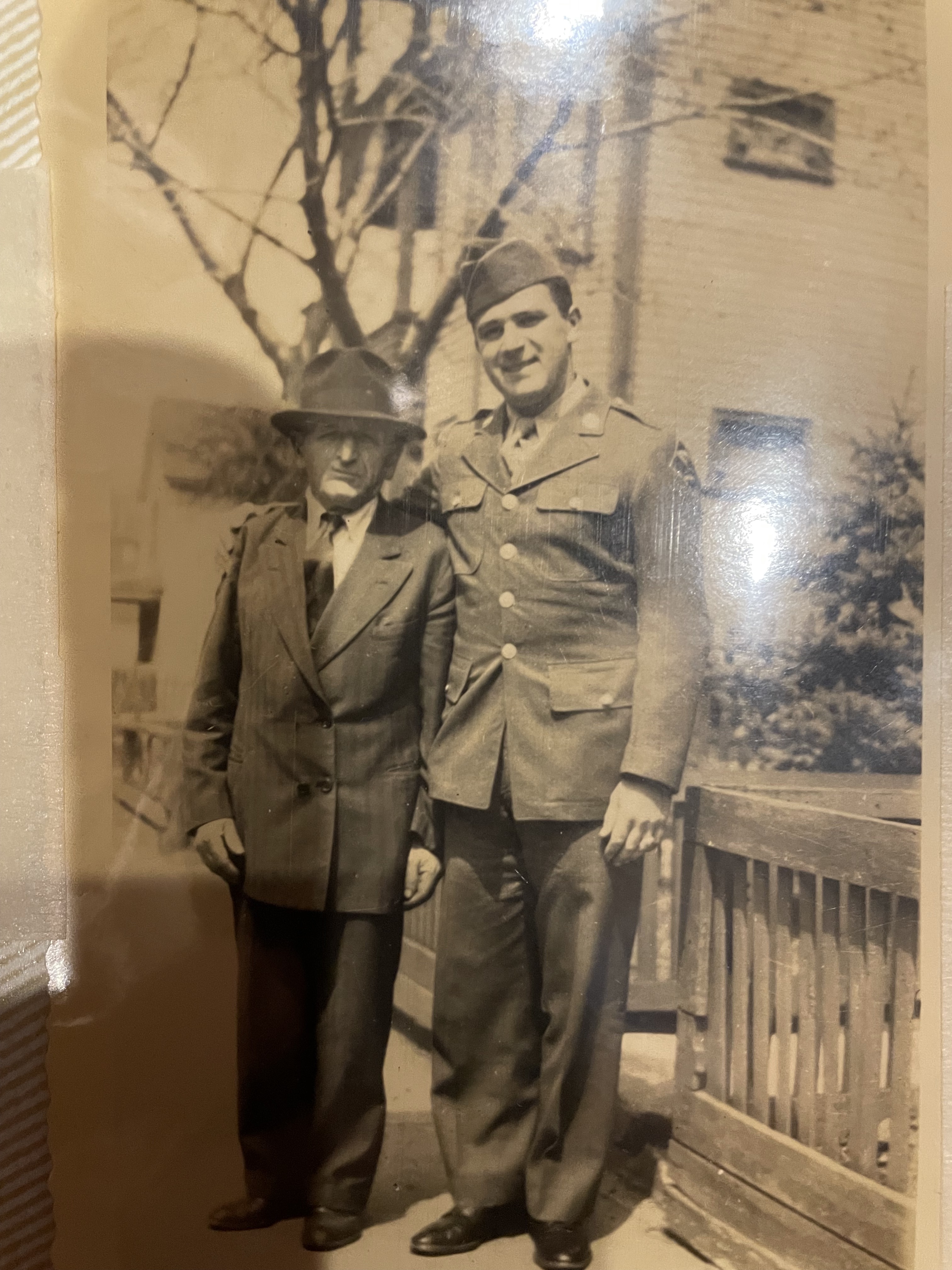 He was eventually drafted into the U.S. Army on August 12, 1943, a day he would recount to me with pride many times during my youth, as it was also the day of my birth 11 years later. His exposure to the dangers, uncertainty, and tragedies of military life during World War II came early during training at Fort Jackson, South Carolina. The troops were practicing a nighttime crossing of the Cumberland River in Tennessee in rubber rafts (my father never learned how to swim) and the raft in front of my father’s capsized. Twenty one soldiers were killed.

My dad would tell me how supportive and patriotic all Americans were during WWII and how important that was to the morale of the troops. When he was home on leave during basic training and dressed in his military uniform, the local businessmen would never let him pay for anything if he went to the Jewish deli for a 15-cent corned beef sandwich or into an ice cream shop. 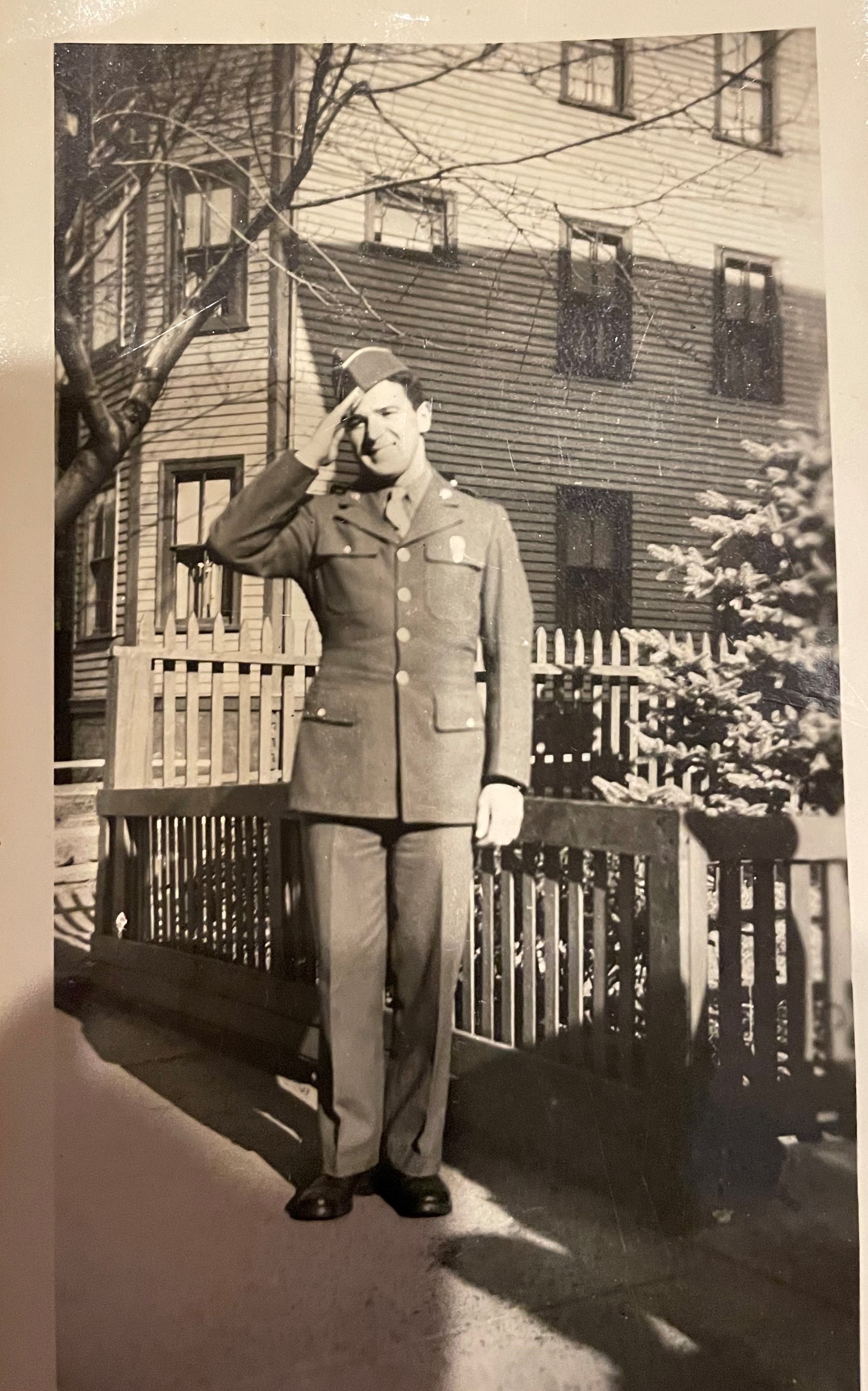 In early September 1944 he was transported with his fellow soldiers on the S.S. Argentina to England, then onto the beaches of France to join the fight across Europe. He was a member of the 104th Regiment of the 26th Yankee division. Almost immediately after arriving in Cherbourg, France, his unit faced live fire -- they were strafed, but not by the Germans, rather by mistake by fellow American forces.

Dad spent the next year traveling and fighting through France, Luxembourg, and Germany in the Battle of the Bulge, experiencing all the dangers, horrors, and destruction of the war. There were many close calls. A German shell crashed into a bunker housing five soldiers, including my dad, and would have killed all of them, but it was a dud, never exploding. 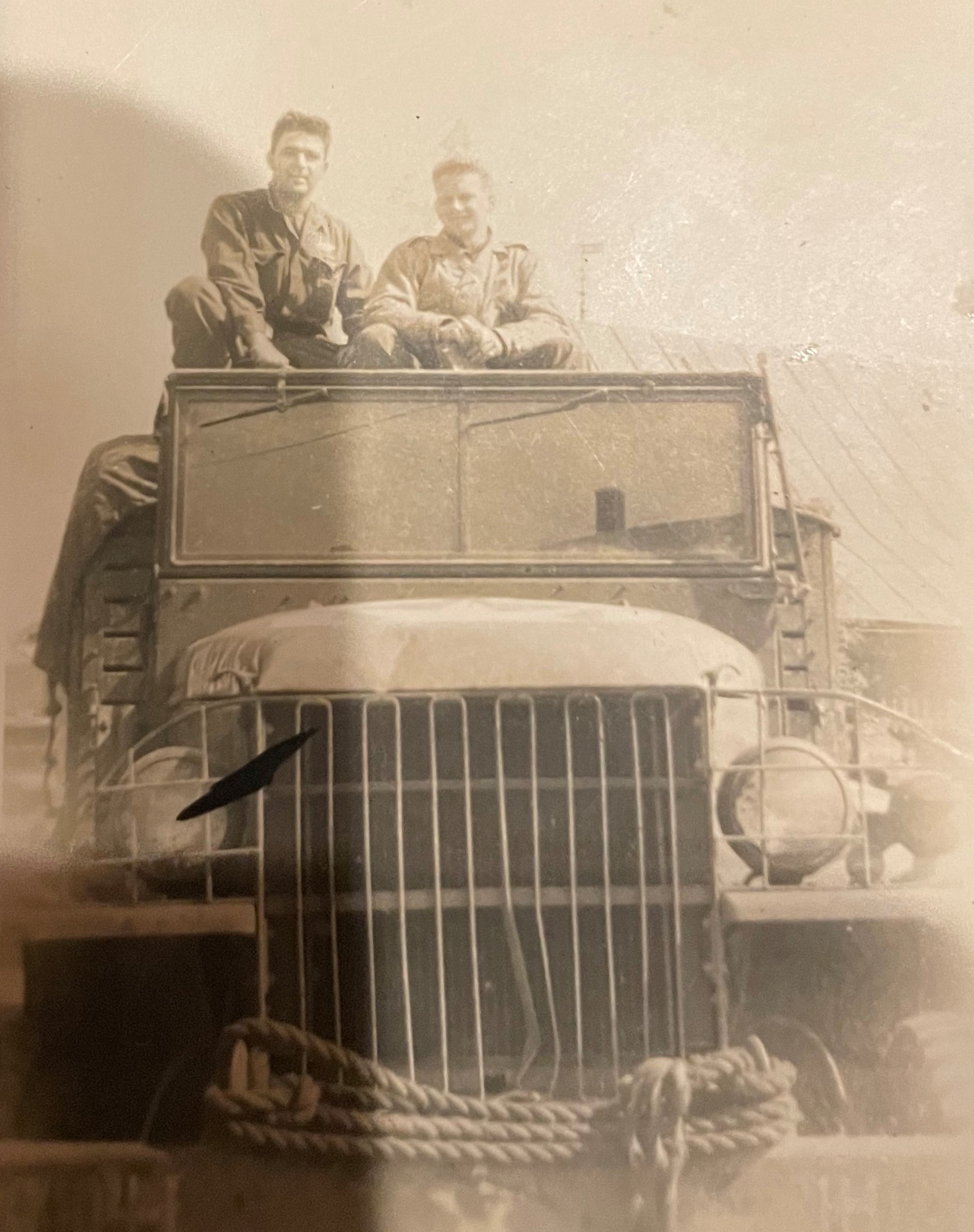 He told me that when he left for the war he thought he might not make it back alive, so V-E Day brought some relief and gratitude, but he was expecting to soon be sent over to the Pacific for the invasion of Japan. With the surrender of Japan, he returned to the U.S. in January 1946 aboard the S.S. Borinquen, surviving a terrible storm in the Atlantic that almost capsized the ship with over 1,200 soldiers on board.

He was always proud to have served his country in its hour of need, and his wartime experiences made him realize the importance of the establishment, survival, and prosperity of the State of Israel. When the Six Day War broke out in 1967, he immediately, proudly, and enthusiastically answered the call of the Worcester Jewish community with a financial commitment to Israel.

In his 50s he went to night school at Clark University to obtain that elusive college degree that had to be put on hold when he answered the call of duty. During my father’s retirement years in his 70s and 80s, he volunteered many times to visit classrooms at local schools to speak about his military service and answer students’ questions. His message was that wars were not fun or adventurous -- they were terrifying, dangerous, and brutal. And that there were no true winners in war -- everybody suffers -- but in WWII the U.S. needed to save the world from tyranny. His hope was that by engaging the students he was again doing his part -- "tikkun olam" as he did 50 years earlier to perhaps prevent future wars and make the world a better place.

When I was made aware of the Ammunition Hill project established by Jewish National Fund-USA, I couldn't think of a more meaningful way to honor my father’s memory, his service to his country, and honor his commitment to, and love for, the State of Israel. For me and my family it was a logical next step of a tradition and commitment started over 60 years ago when I was a child and my parents regularly sent donations to JNF-USA to plant trees in the young State of Israel. It is so fitting that my father, who as a member of the greatest generation participated in the great military victory of WWII, now has his name on a permanent plaque at Ammunition Hill, where the brave soldiers of Israel were victorious in another important battle in 1967. 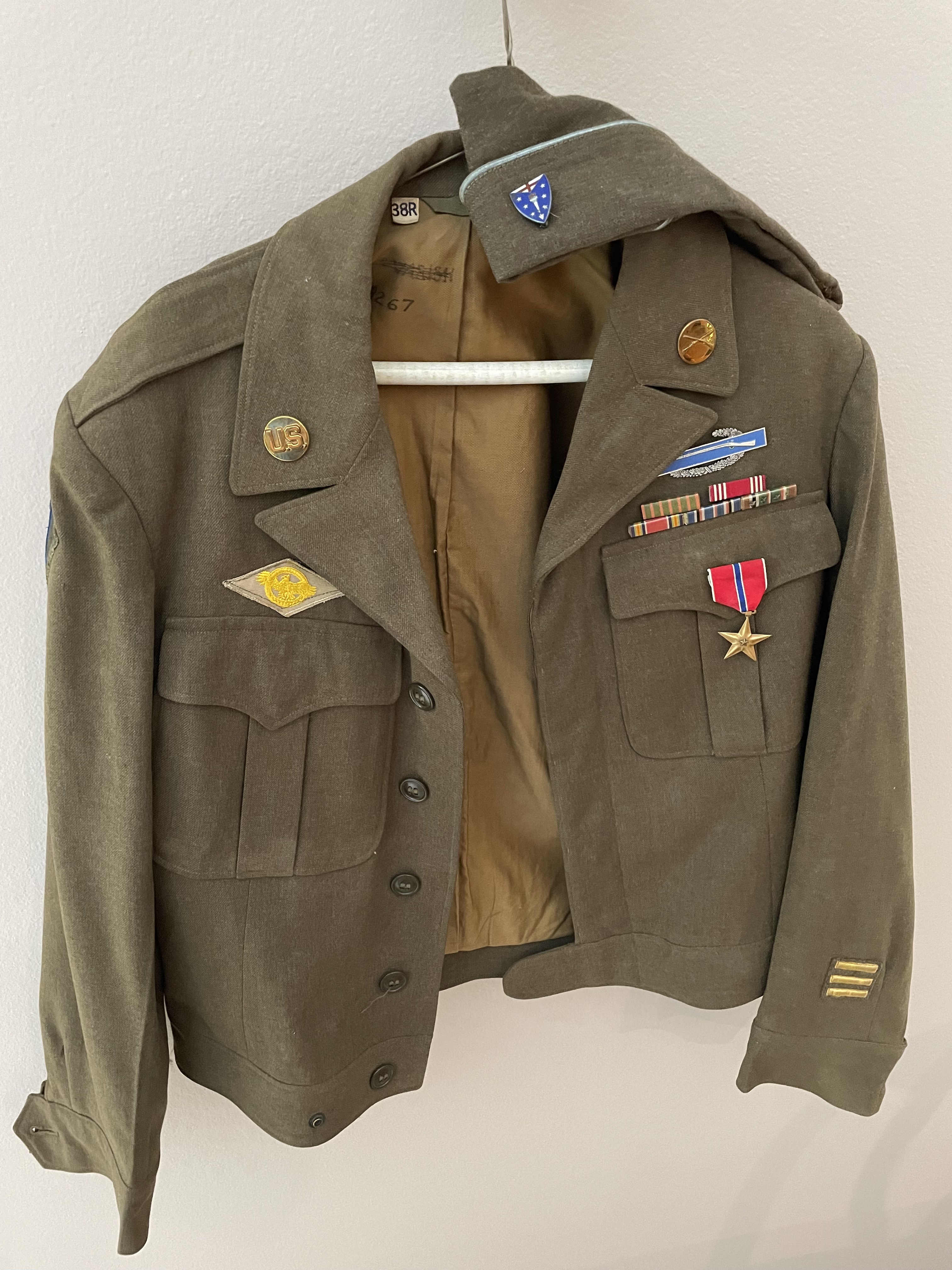 Veterans Day has always been an important holiday for me, a time to remember the sacrifices of not only my father, but the millions of other soldiers throughout our history who gave so much to protect our freedoms. Veteran’s Day 2021 will be even more memorable for me, and I greatly appreciate and am honored to have the opportunity to participate in the Ammunition Hill project. I strongly encourage other Jewish military veterans around the world to consider participating in this most worthy project.