Hope and Joy for Detained Jews in Cyprus: A Sukkot Story 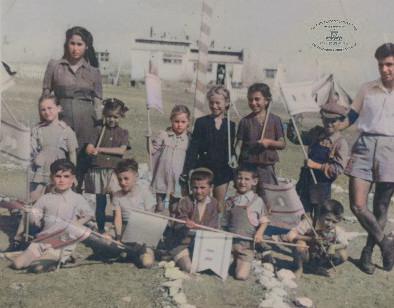 The year was 1948. While the State of Israel had just been established and the British no longer ruled, there were still Jews languishing in detention camps in Cyprus. It would take nearly a year before the last camps were closed and the immigrants were allowed to enter Eretz Yisrael. Rachel Engel was an emissary sent by the Israeli government to try and organize educational and cultural events among these last detainees.

The mood among the people was bleak as they continued to live as captives between barbed wire and watch towers.

“There’s a feeling of despair,” she recalled. “They saw no light at the end of the tunnel. There was no hope that they’d be released soon. Some had already been there for two years!”

The emissaries – shlichim – who were now representatives of the new state, had one objective – to give these people back some hope.

“It was a difficult mission,” she said.  “Especially since most of us had been affected by the War of Independence in one way or another. Our families had suffered losses. We left behind a young country fighting for its very existence.  Inside, our hearts were breaking. Outside, we were happy and joyful. “

“We sang, we danced, we spread a feeling of optimism. We felt that it was our mission – to encourage, pamper, teach and bring the new state closer to the hearts of the immigrants.”

Engel recalled how the shlichim used the Jewish holidays as a way to bring joy to the detainees.

“In the big hut was the dining room and we built a Sukkah adjacent to it,” she said. “After all, it was chag Sukkot. We also celebrated Simchat Torah. We marched and danced with flags. We sat in the Sukkah that had been decorated by young and old. We spoke about the festival and its traditions. We ate fruits and sweets from the Land of Israel. We sang songs about the Sukkot holiday from our homeland. There was a feeling that there was joy to be found in Eretz Yisrael. We all spoke Hebrew. We swept the children away with our enthusiasm and Hebrew was being spoken everywhere.”

Engel remembers the day that the camp learned the surprise news that they would finally be set free.

“The camp was teeming with happy people,” she said. “There were howls of joy!”

She also describes the moment that the emissaries and immigrants first set eyes on the shores of Israel after their release.

“There was so much excitement when we saw the twinkling lights of Haifa and we heard the boats in the harbor all around us sounding their horns to welcome us home – a welcome and honor of the kind I will never forget."

Jewish National Fund-USA and the Society for the Preservation of Israel Heritage Sites (SPIHS) work hand in hand to tell the story of clandestine immigration to the Land of Israel and British detention camps in Pre-Independence years. The Atlit Detention Camp provides a glimpse of the day to day lives of the Jews who were incarcerated in the camp. The Atlit Archives preserve the testimonies of people like Rachel Engel who bore witness to the hardships and pockets of joy in the detention camps.