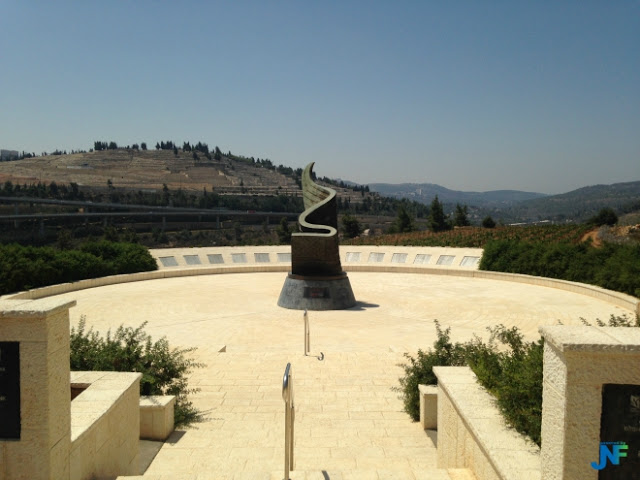 Ever hear the expression "You can’t get there from here?" Due to construction of a new high-speed rail line from Jerusalem to Tel Aviv, that's almost true as you try to find Jerusalem's Living Memorial dedicated to the victims of 9/11. Yes, a memorial in Israel for victims of terrorism who died in New York City, Washington, D.C., and a field in Somerset County, Pennsylvania. But once you find the memorial you understand why it is in Israel and how important it is to visit.

Israel has lost nearly 3,000 civilians to acts of terrorism -- each of their names is inscribed at the Victims of Acts of Terror Memorial on Mount Herzl in Jerusalem. The United States lost nearly 3,000 victims to acts of terror on September 11, 2001, and each of their names is inscribed at the 9/11 Living Memorial in Jerusalem's Azazim Valley, in the Ramot neighborhood. Only one place outside of the United States lists the names of all the victims of 9/11 -- the 9/11 Living Memorial in Israel. The the 9/11 victims were of all religions and ethnic groups and came from more than 50 nations, including five from Israel.

A project of the Jewish National Fund (JNF) and Keren Kayemeth Lelsrael (KKL), the memorial was dedicated on September 11, 2013. The center of the memorial is a 30-foot bronze sculpture of an American flag curled in the shape of a memorial flame. Under the flame and encased in the base of the memorial is a beam from the remains of the World Trade Center. Some of the granite base came from the Twin Towers and was donated by the city of New York.

The Living Memorial Plaza sits on 5 acres and includes a curved Wall of Remembrance on which plaques with the names of 2,974 people killed on September 11, 2001 are listed.

At the dedication, U.S. Ambassador to Israel, Daniel Shapiro, said, "Here, at this painfully beautiful memorial site, we are a reminder to everyone that we, Americans and Israelis, stand together in a spirit of solidarity and commitment to the future. No other nation in the world can understand better than the Israeli people the pain that Americans are feeling today. Israel and the US are linked by a profound friendship, a strong security covenant, economic ties and a shared history of victory and tragedy."

1. Take Route 1 (toward Tel Aviv)
2. After about 4 kilometers (3 miles), take the turnoff (to the right) toward "Bet Zayit" & "Motza."
3. Travel about 500 meters (400 yards). You will come to a "T" junction.
4. At the "T" junction, continue straight onto a dirt/unpaved road.
5. Continue straight on the dirt/unpaved road until it becomes paved.
6. The paved road curves to the right.
7. Follow the signage leading to the site.

1. Take Route 1 (Ayalon Highway toward Jerusalem).
2. As you approach Jerusalem, you will go under the Harel Bridge.
3. 2.6 kilometers (2 miles) after you have gone under the Harel Bridge, you will come to the exit/turnoff (on your right) toward "Bet Zayit" & "Motza."
4. Take this turnoff and then an immediate left toward Mevaseret.
5. Travel 400 meters (300 yards), then turn left toward Mevaseret.
6. Travel for 120 meters (110 yards) and continue under the overpass.
7. After 30 meters (25 yards), turn right onto a dirt/unpaved road.
8. Continue straight on the dirt/unpaved road till it becomes paved.
9. The paved road curves to the right.
10. Follow the signage leading to the site.
PLANT TREES IN ISRAEL