Jewish veterans of honor: Balloon sniper on the frozen tundra 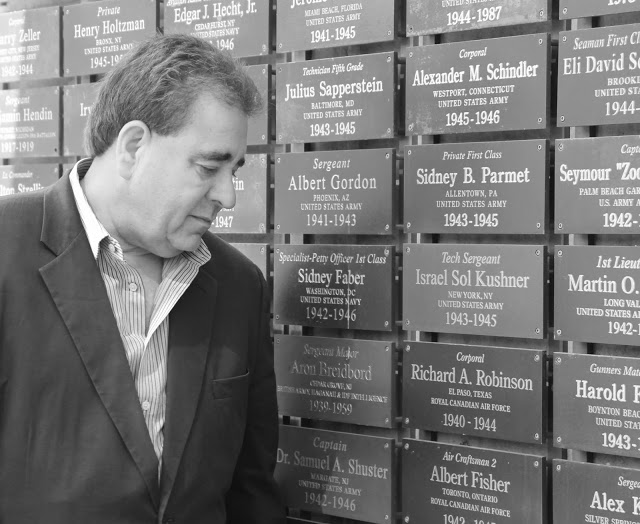 At Ammunition Hill, site of one of the bloodiest battles of the Six Day War and today a historical preservation and memorial site, visitors will see a wall of plaques. It's Jewish National Fund's Wall of Honor, which pays tribute to the courage and heroism of Jewish soldiers worldwide who have fought in defense of their countries in numbers disproportionately high considering their representation in the general population. Throughout November, in honor of Veterans Day, we'll share stories of the soldiers honored on these plaques in Jerusalem. We start with Richard Robinson, father of JNF CEO Russell Robinson.
My father, Richard Robinson, had a heart as big as the state of Texas, yet he was tough, worked hard all of his life, provided for his family, and gave generously of himself whenever he was needed or asked.
My family traces its heritage back to one of the first Jewish settlers of Virginia, with military roots -- my great-grandfather fought in the Civil War and my grandfather, in World War I. When my father was young, the family moved to Canada to start a line of haberdashery stores, but my grandfather had always retained his American citizenship and once a year would bring his family back to the United States just so no one would ever question that they were American citizens.

When World War II broke, my father was attending McGill University in Montreal. He also happened to be playing professional football for the Montreal Aquenots! But witnessing the horrors of World War II, and hearing the stories of our Jewish people, he felt impassioned to defend democracy and join the army in some way. The United States was not entering the war at the time, but Canada was. So he enlisted and became a member of the Canadian Royal Air Force.

Now as an American citizen, you were not allowed to take an oath to the Queen, at the risk of losing your American citizenship. Instead, my father took a pledge to the Queen during the end of her ceremonies, an honor I still bear witness to as I hold his official induction paperwork to the Canadian Royal Air Force.

His military role wasn't exactly combative -- he was assigned to Whitehorse, one of the coldest places in the Northern Hemisphere, and tasked with shooting down bomb-filled balloons being sent over from Japan. He told me he shot down very few balloons, if any, and that his biggest act of survival was just withstanding weather 72 degrees below zero.

Always very proud of his service for the Canadians and for democracy, he framed and displayed his service papers very prominently on his armoire. Before he passed away, we had just begun the Wall of Honor at Ammunition Hill to recognize Jewish soldiers who served their countries.

My family, including my three brothers, felt compelled to make sure out father knew his name was going up on this wall. It was dedicated less than six months before he passed away by his granddaughter and grandson. Nothing made him more proud.