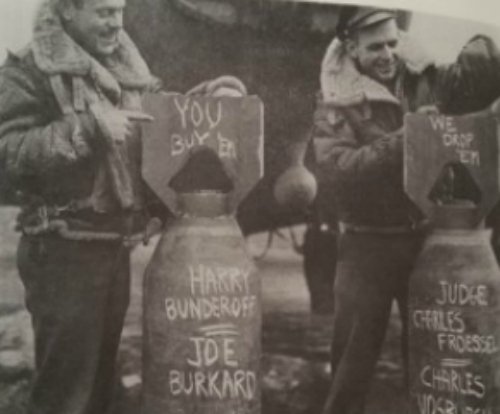 Charles Blumenfeld (left) poses with a bomb labeled Harry Bunderoff, the name of a cousin who purchased a war bond.


We continue our series profiling the soldiers named on JNF's Wall of Honor at Ammunition Hill with Charles Blumenfeld. Plaques on the wall pay tribute to Jewish military veterans worldwide who have served their countries.
Before the U.S. entered World War II, Charles "Red" Blumenfeld heard rumors of the horrors Jews were facing in Europe. This spurred the American to enlist in the Canadian Royal Air Force, and he graduated flight school with honors. Once the U.S. entered the war, Blumenfeld flew for the U.S. Air Force, 42 missions, returning home with his entire crew and going on to win military honors including the Bronze Star.
"Dad was one of many true patriots, and a hero," says his son Alan Blumenfeld, shown in the photo below dedicating a plaque at Ammunition Hill in his father's memory in 2011.

Charles was among the first group of U.S. flyers shipped out to England, and he became a lead navigator on his brand new B-17E heavy bomber. While abroad, he regularly sent dispatches back to the Long Island Press newspaper to keep his community posted on the war and inspire bond sales. His idea: buy a bond, get a picture of a bomb with your name on it. The motto of this bond push was "You buy 'em, we drop 'em," and it raised thousands of dollars for the war effort.

Charles completed some 25 unescorted missions over Germany at a time when aircraft losses were 75 percent. Throughout the operations, he managed to stay connected to his Judaism.
"As a traditional Conservative Jew, Dad was able to keep kosher -- basically living on salami sent to him, cheese and peanut butter," says his daughter-in-law Helene, a member of JNF's Sapphire Society, the women's major-gifts division of Jewish National Fund.

After the war, Charles went on to become president and owner of Adams Clothing, one of the first discount retailers in Philadelphia. He died in 2005 at age 86.
"Dad was an ardent Zionist." his daughter-in-law says. "He and his wife Ethyl were forever fundraising for Israel and made something like 15 trips to Israel in their lifetime."

In 1982, in honor of their 40th wedding anniversary, the couple brought Helene and her husband, their son Alan, to Israel, along with the couple's daughter, Lisa, and son-in-law, Toby. Some of them had never been. "Alan was hooked," Helene says. "We were always donating to JNF but after this trip it was different. We became JNF."
Seeing their relative's name on JNF's Wall of Honor, therefore, has special meaning, she says.

"To honor Dad with this plaque is to memorialize him in history as a Jew who fought for his country, but mostly for Jews in Europe in the camps, everywhere, who were waiting to be liberated."